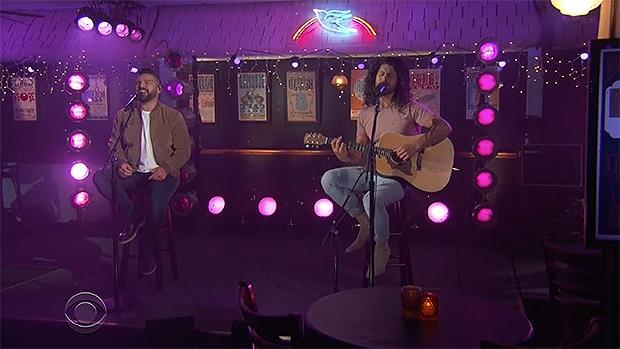 A lot can go wrong during a live award show, & unfortunately, there was some tech issues during Dan + Shay’s ACM Awards performance that left fans super bummed!

There is no question that country duo Dan + Shay are incredibly talented. Unfortunately for the pair, their performance of their latest single “Glad You Exist” at the Bluebird Cafe during the ACM Awards was plagued with a tech issue that made fans erupt on Twitter! While Dan Smyers and Shay Mooney sat in the iconic Nashville spot and sang their upbeat love song, it was evident the sound was about 3 seconds off of the visuals. The duo took to Twitter after the performance to react to the faux pas. “apparently there was an audio/video sync issue on the television broadcast.  we’re bummed about it, but it happens, especially when performances are happening in multiple locations.  kudos to the @ACMawards for pulling off a great show,” Dan + Shay wrote on Twitter.

Of course, Twitter was NOT having it and was quickly filled with angered fans, some accusing Dan + Shay of lip syncing. “the bluebird cafe performance of Dan and shay is embarrassing…. obvious a lip sync since the music ended before the last woo-hoo was sung….very disappointing to say the least!” one user wrote. Another questioned “What the heck is going on with Dan and Shay?!” One viewer blamed the ACM Awards for “doing Dan + Shay wrong” and promised they “are normally so good but something was off about that performance tonight.”

“CBS absolutely botched the Dan and Shay performance. Ridiculous. The hottest artist in country and they blew it. I feel so bad for Dan and Shay! You had one job #ACMAwards,” the tweeter said. A big fan added, “It’s a shame that a show of this caliber did them wrong. The acoustic version was beautiful. Shay‘s voice is just incredible and Dan‘s harmonies are a perfect compliment.” There has yet to be a comment as to what actually occurred with the audio.

It does appear that some or all of the Bluebird Cafe performances during tonight’s ACM Awards were pre-recorded, which could explain that obvious AV issues that occurred during their set. Nonetheless, fans were not thrilled. By the following performance, which was Luke Combs at The Ryman, things seemed to be back to normal.