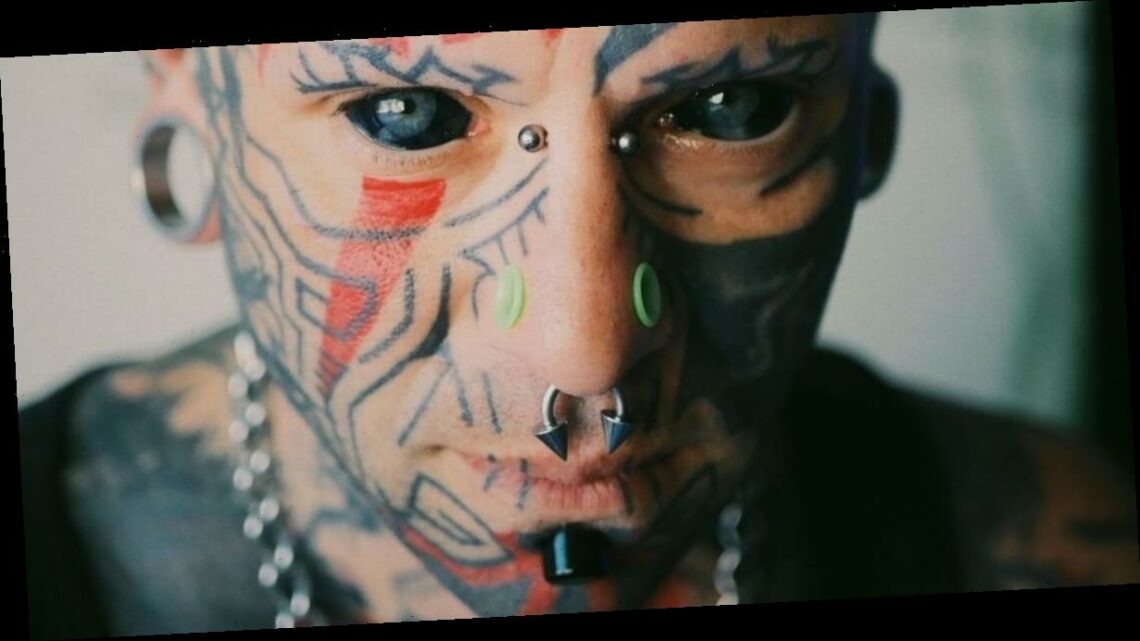 An extreme tattoo fan claims other parents keep their children away from him because they’re scared of his dramatic inkings.

Former electrician and tattoo artist, Karl Roy, spotted a tattoo machine in a magazine when he was a teenager and snuck it home behind his parents' backs.

The 44-year-old, from Canada, got his first body art at just 14-years-old and gave himself a tribal dragon tattoo on his calf when his mum was out.

By his late teens had both arms fully inked – and by the time his twenties rolled around, he began to ink his face, brows, chin and temples with spiritual symbolism based on ideas of life, death, good and evil.

Finally, in 2016, having heard about eyeball tattoos on a Facebook page, Karl decided to have the dangerous procedure.

Would you have any extreme tattoos? Tell us in the comments below… He heard tales of people who go blind from the procedure, but decided it was worth the risk.

Karl said: “I completed my face tattoos in my late thirties and am currently almost finishing my body.

"I discovered eyeball tattooing through body modification groups on social media and it was a modification that fascinated me immediately.

“It was a continuation of my evolution.”

The artist’s family have always supported him and his body art, but they haven’t always understood it.

He explained: "My parents and friends have always supported me but haven't always understood my choices.

"They would often ask If I was going to be able to get a good job or make a good living.

"Today however, I run my own studio with my partner, I am fully fulfilled and those close to me now see me beaming.”

The bloke does sometimes get hate from strangers too.

Karl said: “Some strangers say horrible things like 'What example are you setting for children?' and 'you should kill yourself'."

He added: “Some parents keep their children away and even say that I should be ashamed of the way I look.

"Often it is the parents who are more scared of the way I look than their children.

"It's fear of the unknown that makes people judge others quickly and for children this unknown does not exist."

Karl doesn't let these negative opinions hold him back.

He said: "Earlier in my life, these types of comments would have made me feel really angry, but I'm much more mellow these days.

"I now often approach negative or curious people by giving them a business card whilst smiling.”

The dad is proud of his appearance as his four children, aged eight to 17, think he and his wife are “super cool parents.”