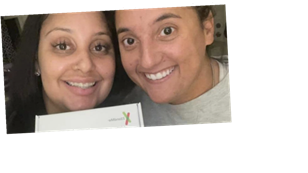 Cassandra Madison recently shared her story with the world thanks to a TikTok trend: “Tell me your craziest one-in-a-million story. Something that happened to you that you just can’t believe was real.”

Madison had a one-in-a-million story, and responded to the prompt from a TikTok user, posting a video explaining her relationship with her long-lost-sister – who she met while working at a bar.

“Back in 2013, I used to work at this bar in New Haven, Connecticut, called the Russian Lady,” Madison said in the video. “I end up working with this girl who is Dominican, like I am, and was also adopted from the Dominican Republic.”

Madison said her coworker was “super cool,” and they immediately hit it off – people even noticed how alike they were, joking that they were like sisters. “We actually bought shirts one day that said, ‘I’m the big sister,’ ‘I’m the little sister,'” Madison said.

“Fast forward to 2021 and I finally convince her to take a 23andMe test,” Madison said in the video from January. “Let’s see, I mean, you’re adopted, let’s see if we can find your family.”

“We got the results in yesterday. I’m her family,” she said. “I am her sister. Same mom, same dad.”

The story was so uncanny, it quickly went viral on TikTok. Madison and her coworker-turned-sister, Julia Tinetti, are just 17 months apart and have other biological siblings, but were the only two put up for adoption, they told Inside Edition, a ViacomCBS property.

“I think adoptees understand other adoptees more than someone who’s not adopted,” Madison told Inside Edition. “So it was just kind of like, ‘Sweet! I have somebody who understands.'” The two women also bonded over being raised by a single parent.

The women said they have no ill will toward their birth parents for putting them up for adoption. “We understand that they did the best they could with what they had,” Madison said.

Now, the two former coworkers are family – and Madison is now an aunt to Tinetti’s son. “It’s very surreal. My nephew comes up to me and he’s like, ‘Tia, tia, tia!’ And I’m like, ‘That’s me!’ He’s talking to me,” she said. “We actually look a lot alike, too. We all look alike.”

In a follow-up video on TikTok, Madison said she was put up for adoption at six weeks old because her parents couldn’t support themselves, her and her brother. She said her adoptive mother and Tinetti’s adoptive mother did not use the same adoption agency.

Madison said she first took a 23andMe test in 2018 and was able to connect with family members in 2019, including her biological father. She said she didn’t immediately think to ask him if there were any other siblings put up for adoption – until 2021.

That’s when he said there was another baby put up for adoption — a girl who was younger than Madison. A few days later, she said she rushed from Virginia up to Connecticut and got Tinetti to take a DNA test.

Madison said it was “insane” that they ended up working at the same bar and after joking about being siblings since 2013, they ended up actually being sisters.