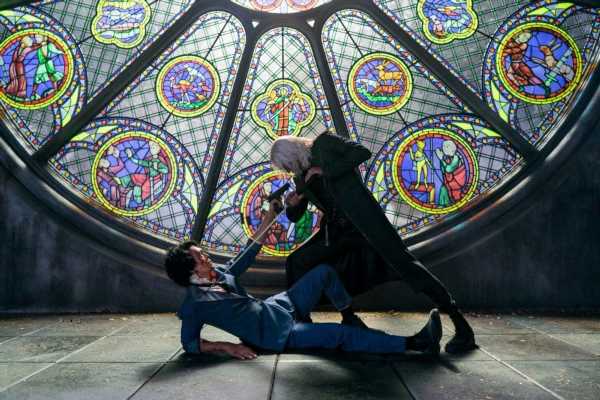 Netflix’s live-action adaptation of anime classic Cowboy Bebop debuts on the streamer on Nov. 19, and it promises to remind fans why they loved the original series in the first place. With just 10 episodes in its first season, Netflix’s iteration of the show will need to condense Spike Spiegel’s (John Cho) adventures on The Bebop — that is, unless the streamer intends to bring it back for season 2.

And with 26 episodes to adapt from the anime, that seems like a possibility, especially if the series intends to expand on certain storylines. Either way, there are some key installments fans of the original Cowboy Bebop want brought to life — including these five episodes.

‘Ballad of Fallen Angels’ is critical to any ‘Cowboy Bebop’ telling

The beginning of Cowboy Bebop gives viewers a chance to understand Spike Spiegel, Jet Black, and their relationship to one another. However, “Ballad of Fallen Angels” is the first installment that gives deeper insight into Spike’s past and his motivations. The episode offers a backstory necessary to any telling of Cowboy Bebop, and it introduces Vicious and Julia — two characters essential to Spike’s storyline and the series’ overarching plot.

Judging by the trailer, fans are definitely getting a take on this episode. That’s the right call on Netflix’s part, since its live-action series simply wouldn’t work without it. Hopefully, Spike’s shootout with Vicious is just as epic as in the anime. They’ve certainly got the aesthetic down.

Will Netflix’s ‘Cowboy Bebop’ bring us ‘Jamming With Edward’?

Radical Edward is one of the best parts of the original Cowboy Bebop, but there’s been no sign of the character in any of the promotions for Netflix’s live-action series. The streamer could be saving the big reveal for later. We certainly hope that’s the case, anyway. It’s difficult to imagine the series without Ed and Ein bringing some levity to The Bebop.

“Jamming With Edward” introduces the young hacker by having her help The Bebop track down a satellite that’s been acting bizarrely. The episode itself offers a unique mystery to solve in addition to its compelling introduction to the character. Add in some humor, action, and deeper conversations about loneliness, and “Jamming With Edward” is a must-have for the adaptation.

Not much happens in ‘Toys in the Attic,’ but we’d love to see it in live-action

A dangerous monster or Spike’s leftover lunch? “Toys in the Attic” somehow combines the two, bringing Cowboy Bebop fans an entertaining installment where not a lot happens plot-wise. However, if Cowboy Bebop had a Halloween episode, this would be it. And you never skip the Halloween episode in your live-action adaptation.

In all seriousness, “Toys in the Attic” is one of the most memorable installments from the original series. Whether that’s because of the mysterious monster roaming The Bebop or the inner dialogue viewers get from the characters is anyone’s guess. Arguably, those things work together to accomplish a top-notch episode.

Netflix should dive deeper into ‘My Funny Valentine’

Faye Valentine’s backstory is one of the most interesting from the original Cowboy Bebop, and Netflix’s live-action series could dig deeper into the character’s history. About halfway through the original series, fans discover that Faye is much older than she looks. After an accident she had, her body was frozen using Cryo — and she was woken years later when medical technology advanced enough to heal her.

Sadly, Faye doesn’t remember much of her old life. And while the anime does delve into her past, its 26 episodes can only give the subplot so much screen time. But Faye’s storyline is arguably one of the most compelling science-fiction aspects of the series. Hopefully, the Netflix show will lean into that — and her struggle to come to terms with who she is.

Vicious and Spike’s showdown is inevitable

Both major fights between Vicious and Spike need to show up in the live-action Cowboy Bebop, and teasers have already shown footage of their early clash. However, the anime’s finale — “The Real Folk Blues, Part II” — contains a showdown that’s much more epic. And it’s the inevitable conclusion of the series, whether it happens in this initial round of episodes or at a later date.

Of course, Spike settling the score with Vicious is hardly the only reason Netflix needs to adapt the anime’s finale. The last episode of the original series contains a number of compelling moments from the time it opens until the words “You’re gonna carry that weight” close it out. And with such a stunning ending, Netflix hardly needs to change course with its take on the series. Even if it diverges, it all needs to lead back here.

'The Blacklist': What Happened to Red's Love Interest Anne Foster?