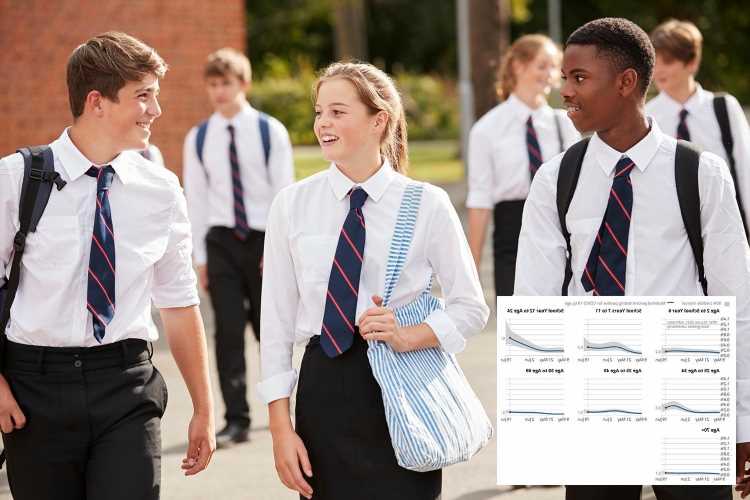 COVID is in every classroom with one in 15 children in England’s secondary schools infected with the bug.

The stats published today add further weight to fears the fourth wave has begun – and is already spreading into older groups. 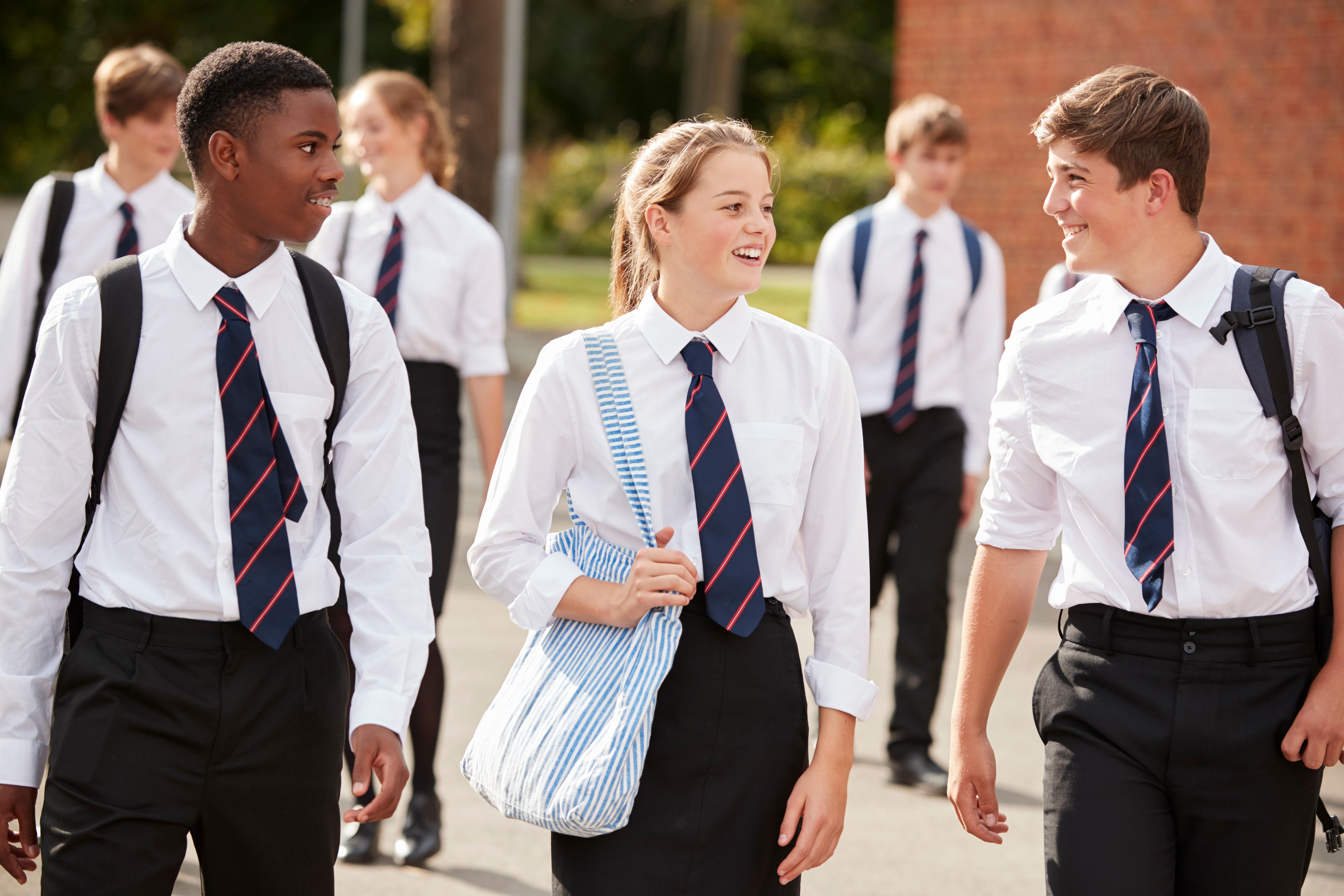 Experts have warned people to be cautious around the elderly, whose vaccine protection may have waned over time.

Previous waves of the virus have shown outbreaks tend to start in schools and among younger adults, before spreading through the generations into the most vulnerable.

New data today estimated 6.2 per cent of those in Year 7 to Year 11 would have tested positive for Covid on September 25.

It’s the equivalent of one in 15, or two children in a classroom of 30.

The figure, from the Office for National Statistics (ONS), had reached a low of 0.08 per cent at the start of May.

The ONS said secondary school pupils had the highest number of cases of any age group, just weeks after kids went back to school.

Prof Kevin McConway, an emeritus professor of applied statistics, The Open University, said it was “an extraordinarily high rate”.

In primary school children and younger (two years old), 2.5 per cent were estimated to have had Covid on September 25 – one in 40. 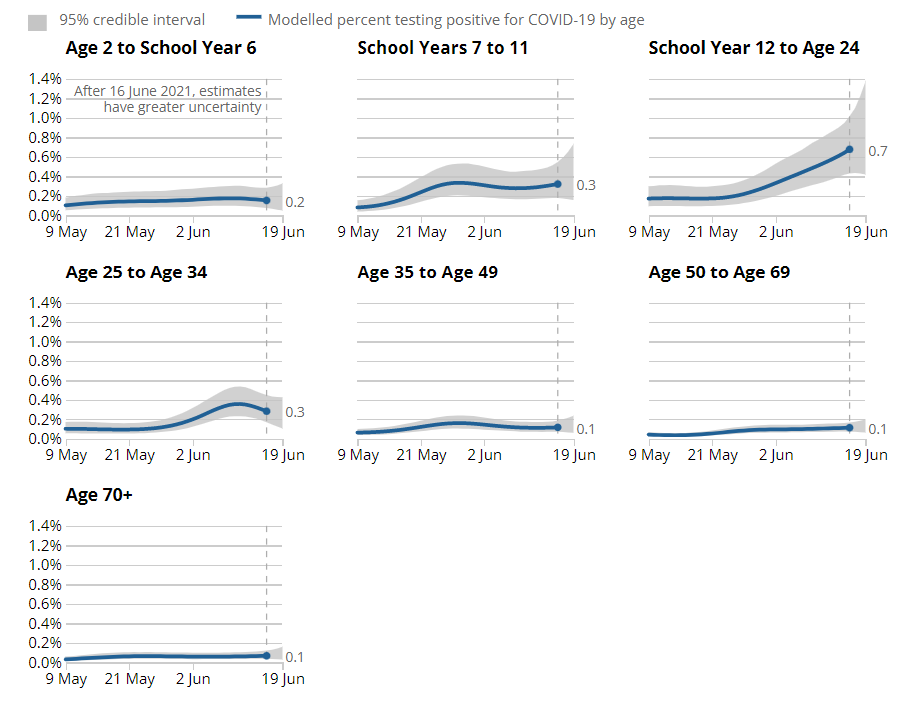 For other age groups, the ONS said there were early signs of a possible increase for people aged 70 and over, but relatively little changes over other ages.

Overall, one in 85 people in private homes in England had Covid in the week to September 25 – the equivalent of about 658,800 people.

At the peak of the second wave in early January, around one in 50 were estimated to have coronavirus.

For the rest of the UK, figures show that, in the week to September 25:

It comes as an expert wanted families to be cautious of their grandparents, as Covid spreads out from schools and into homes.

Professor Tim Spector leads the ZOE Covid Symptom Study app, which has shown rising case numbers in those aged between 30 and 50.

Prof Spector said: “Many of them may well be the parents who are mixing with these infected kids. I think this is likely to be a driving infection source for the next few weeks.

“So if you've got kids at school, do be a bit careful about mixing, particularly with vulnerable or elderly relatives for the next couple of weeks.”

The ZOE and ONS infection surveys use different methods of estimating infections, but have historically seen the same trends.

The ONS said generally infections are high across the UK.

But the statistics show huge variations between the nations and even from one neighbourhood to the next.

Prof McConway commented: “As just one example, in Salford for the most recent week, ONS estimate that about 1 in every 30 people in the community population would test positive.

“But in the adjoining area, Wigan and St Helens, the estimated rate of testing positive is very much lower at 1 in 110.

“There are large differences between areas that are adjoining or very close to one another in many other places on the map too, which does add to the evidence that the current state of the pandemic is very far from consistent across the whole country.”

Though each UK nation has experienced a slightly different “shape” of the third wave, figures “show that there is still a lot of Covid about”, according to Dr Simon Clarke, associate professor in cellular microbiology at the University of Reading.

“We have been bumping along at a similar rate for the past few weeks, with infections currently being driven by secondary school-aged children.”

Vaccines have been shown to reduce the number of people whose Covid-19 symptoms are serious enough to require hospital care.

But even though patient numbers have dropped slightly in recent weeks, they are still at a level that is “stubbornly high”, said Mark Woolhouse, professor of infectious disease epidemiology at the University of Edinburgh.

He said the numbers need to “fall significantly before pressure on the NHS starts to build up during the winter”.

“Although only a small minority of adults remain unvaccinated, they are greatly over-represented among hospital cases and deaths,” Professor Woolhouse told the PA news agency.

CategoryLifestyle
Tagsclassroo COVID Every in is now

Brian Laundrie could be hiding out in urban areas and using a face mask to evade capture, survival expert says