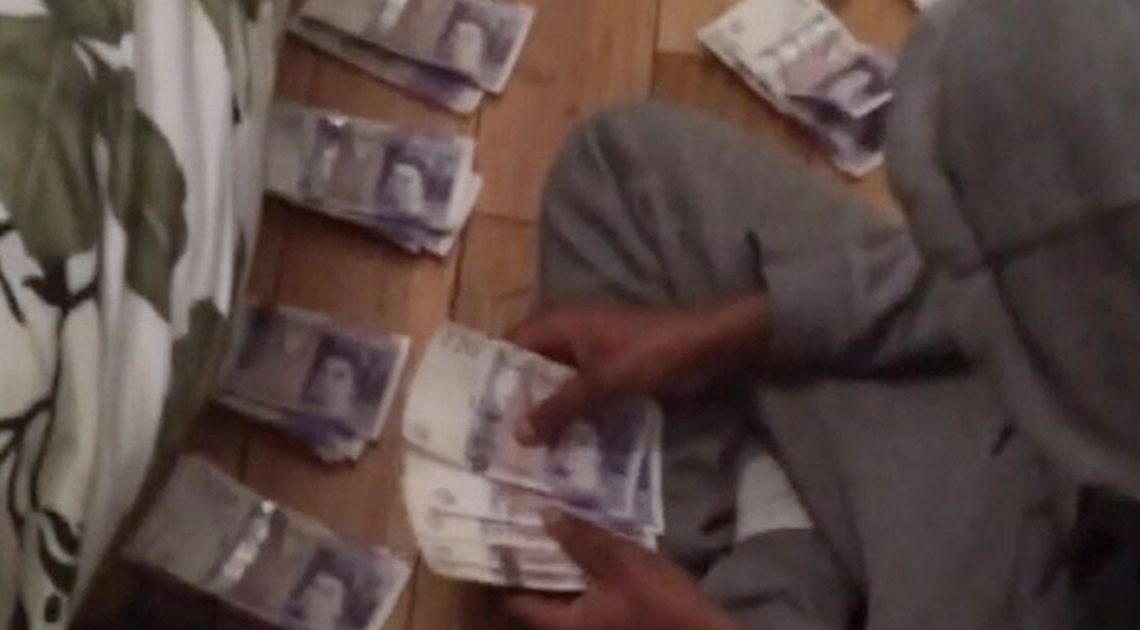 A county lines drugs gang who trafficked thousands of pounds worth of heroin and cocaine were caught after boasting about their riches on Snpachat.

Police discovered footage on the drug dealers' phones showing them laughing as they joked 'splash dat cash' and threw money on the ground.

Officers say they mobsters thought they were above the law and even mocked a police leaflet put through a door warning of the dangers of cuckooing – when drugs dealers take over a property to sell drugs.

But their plot ended in failure as police in Exeter smashed the trafficking chain.

The gang of nine are now facing years in jail, Devon Live reports.

Devon and Cornwall Police officers have now released footage found on gang members phones which helped to convict two of the men at trial.

In the clips, the gang throw cash around a room while smoking and listening to music.

One lounges on a bed muttering and stroking a handful of notes against his face, while another sits in his Nike tracksuit smoking and flashing his watch beside a box of new shoes.

Footage also shows gang leader Hassan Sufi grinning while holding a large stack of £20 and £50 notes in his forearm.

Co-leader Yakub Sufi can be seen with an unknown friend counting cash on the floor while an incriminating county lines drugs mobile phone is on the bed close by.

Detective Sergeant Matt Lawrence said: “The gang would brazenly show off their ill-gotten gains; gang members and drug dealers Faisal Ibrahim, Yakub Sufi, Hasan Sufi, Faisal Ibrahim and Bobo Faki all filmed themselves during drug runs to Exeter and bringing cash back in London, sharing these videos on Snapchat – these men are now all in jail.

“I would like to personally thank all who worked on this wide and complex case for their hard work and efforts.

"Without them these individual would still be dealing Class A drugs and coercing children into a gang lifestyle.

“Today’s result shows that Devon and Cornwall Police continue to work hard to identify those responsible for the drug trade in our area and to bring them to justice; they ruin lives and we will not turn a blind eye to this type of gang activity.”