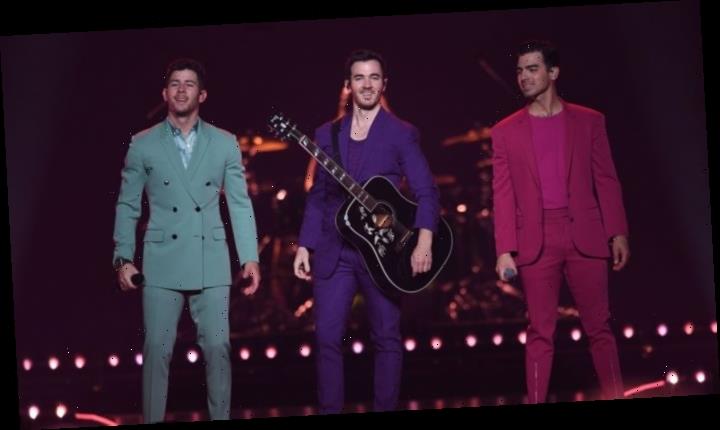 “Two years ago,” he recalled, “My brothers and I sat in a room and said, ‘If we reunite, do you think anyone will care?’”

That was back in 2017, four years after the boy band — to the chagrin of teen girls across the globe — split up to pursue personal projects. During that time, Nick enjoyed a successful solo career, Joe fronted the band DNCE and Kevin, taking a break from music, had two daughters with his wife, Danielle.

But if multiple sold-out shows for the band’s first major concert tour in a decade wasn’t already an indication, the blood-curdling and borderline deafening shrieks from longtime fans at the Barclays Center in New York certainly crystallized fervor for a reunion.

“After the year we’ve had,” Kevin roared into the mic. “I’ll say you absolutely do.”

The Jonas Brothers, returning to New York for a third time this tour following back-to-back stops at Madison Square Garden in August, didn’t let a cold and rainy night put a damper on Saturday’s show: They kicked off the concert by descending from the ceiling on a rectangular platform, belting “Rollercoaster.”

Judging by the crowd’s reaction, it was almost as if devotees had spent the better part of the last decade harnessing their energy, only to unleash it every time the Jonas Brothers so much as opened their mouths. The mostly female crowd (except for the occasional brave boyfriend or seated parental chaperone) needed no invitation, leaping to their feet the moment the brothers descended from the rafters and didn’t waver for the entirety of the two-hour set.

The Jonas Brothers treated concert-goers to plenty of songs from their new album, from  hits like “Cool” and “Only Human” to ballads “Comeback” and “I Believe.” But the trio, well aware the masses were just as eager to hear their catalogue from the early aughts, swiftly launched into “S.O.S.” They later had the crowd bouncing with Disney Channel-era favorites like “That’s Just the Way We Roll” before serenading a sea of screaming fans with “When You Look Me in The Eyes.”

Midway through, the band relocated to a back stage with a rising platform, where the brothers took requests from the audience before letting Nick and Joe have their own moments in the spotlight (Kevin had an albeit brief moment to shine earlier in the night with a guitar solo during “Cool”). From there, Nick took center stage to belt a gospel-esque rendition of his hit single, “Jealous.” Then, in an homage to their Disney Channel roots, the duo slowed down the evening with “Gotta Find You,” a song Joe first sang with Demi Lovato in “Camp Rock”; she wasn’t in attendance, but Nick’s vocals more than sufficed. Joe brought the energy back on the main stage with a colorful performance of “Cake by the Ocean,” complete with confetti and dancing inflatable tube men.

Later, Joe pressed the crowd with a controversial question, one of the rare times the band addressed the audience during the night. “Who thinks they’ve been a Jonas Brothers’ fan the longest here?” he prodded. “Now I’m not talking about any fan, I’m talking about the ones that gave a sh– about the Jonas Brothers back in the day.”

“We’re going to do something special for all you O.G. Jonas fans,” Joe promised before launching into a hand-clapping, hip-shaking mashup of throwbacks including “Mandy,” “Paranoid,” “Play My Music” and “Hold On.”

Before an encore performance of “Burnin’ Up,” infused with pyrotechnics, and of course “Sucker” — the song that jump-started their comeback — the brothers closed the show with nostalgic bangers “Lovebug” and “Year 3000.” Most audience members just hoped it wouldn’t be that long until their next album.