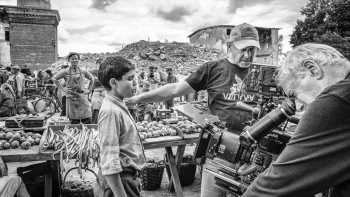 Czech indie producer director Vaclav Marhoul says he knew from the moment he got his hands on Jerzy Kosinski’s Holocaust novel “The Painted Bird” that he had to adapt it for the screen.

Finding the book at all in Central Europe was not easy even a decade ago, when Marhoul took up the challenge of creating the mythic, war-torn land of the tragi-comic story by the author of “Being There”; it had long been banned during the communist era and copies were still rare, Marhoul says.

He credits below-the-line colleagues in Poland, Slovakia and the Czech Republic for much of the feat. To conjure the book’s dark and haunting world, the director brought in cinematographer Vladimir Smutny and production designer Jan Vlasak, two of the nation’s top creatives in their fields.

“The Painted Bird” spins a netherworld of Slavic wartime horrors intermixed, Marhoul says, with just the right measure of hope. The latter, in the form of a Czech boy’s survival through waves of violence and devastation, is the essence of the story, the director says.

Polish officials, especially during the communist era, saw the tale differently, banning the book in the author’s native land shortly after its publication in 1965 and vilifying Kosinski, a Lodz-born Jew who immigrated to the U.S. after himself surviving the war — seemingly because his story does not make out all the occupants of Nazi occupation to be resistance heroes.

But its moral gray areas have inspired imagery that reaches a new level, says Smutny, pushing him beyond challenges he’s faced in the scores of past features he’s filmed, including Oscar winner “Kolya” in 1996.

Filming on 35mm negative stock, says the veteran DP, is not the challenge; rather, “the problem is black and white. I have never before shot a film in black and white. For me it’s a new thing. At the beginning it was very challenging: how it changes the color and light issues. Because of the contrast and the shadow, it’s very different from color.”

Another concern, he confesses, is whether the subtleties of gradients in the shadows could be somehow lost when the film is transferred to digital drives for projection.

“Digital is a bit aggressive,” he says.

Smutny hesitates to call the style film noir, but says he does embrace dramatic, striking imagery. “I’m still working in my style, though I do like noir films with deep contrast and strong key light. But I try to embrace modern cinematography.”

Managing the color grading will help preserve the moody atmosphere, he says. “I do it myself, always. I’m expecting to spend a month on it.”

Smutny, now 76, still operates the camera himself too, working with Hawk Anamorphic Lenses on this project. “In this film, the composition is a bit special,” he says. “I don’t concentrate a lot on the edges of the frame. The Hawk has a lot of distortion at the edge of the frame. I like that. It’s a special look.”

Another challenge is the need for action in both foreground and background, since the filming approach will make both visible most of the time. “Widescreen lenses are different in terms of depth of field,” he says. “And I use a small aperture.”

The lenses are also key to creating an old-school cinematic look, Smutny says.

It’s a far cry from his early influences. He cites Jean-Luc Godard DP Raoul Coutard as a major inspiration and still frequently does handheld work himself as did the French New Wave maestro.

And the director’s style, in which actors have a degree of freedom to move through space, presents parallel challenges to those of the rebellious 1960s. But although he sometimes improvises while shooting, Smutny rejects the idea he is working documentary style. “It’s very stylized,” he says.

The film’s minimal use of dialogue leaves much of its storytelling in Smutny’s hands, Marhoul says, and that puts a significant burden on the scene designer.

“It’s a sense of Central or Eastern Europe, but it’s not one particular place,” Vlasak says. “Everything is mixed, but it’s not one concrete location. It’s a made-up place, a copy of many places rather than a real one.”

In order to create a uniform look among location shoots in Ukraine, Slovakia, Poland and the Czech Republic, “we had to actually construct a lot of the sets … to ensure continuity.”

Starting with the Ukraine hamlet of Svalovychi, he says: “There was a village that had been preserved that was still usable. Because it was close to a lake we were able to do thatched roofs of reeds.

During the war this village was completely burned down, but after the war it was rebuilt with wooden cottages. We were building in the old Ukrainian style in two locations.”

This then served as the basis for what the crew later built in the Czech Republic. “The architecture is a mish-mash really, encompassing elements of everything from here to the Ukraine,” says Vlasak. “So it was up to our imagination.”

A longtime collaborator with Smutny, Vlasak says the film’s embrace of black-and-white film “is great for achieving the aged look. This plays up that the film is a period piece; it helps that people always associate black and white with historical images.”

Because they knew they would use mainly locations rather than studio sets, Vlasak says, the filmmakers scoured the region for more than a year. “We were looking for pristine landscapes where we could set up from scratch.”

The production’s small, tight-knit, flexible crew was essential, he adds. “It was really exceptional because a feature doesn’t usually take this long to film.”

To ensure that everything caught by the widescreen lens looks right, the crew had to create settings that could engulf the camera. “It’s not the traditional storyboard,” he says, “so the director and Smutny will come into a set and be completely surrounded by this world. It’s not the most affordable way to operate, but it does give them a lot of freedom to create what they like.”

The challenge reaches its extreme in a climactic scene in which the Czech town of Boletice is engulfed in flames, with livestock and vehicles running chaotically, including an overflight by a restored Soviet Yak-3 fighter plane.

“The fire had to be realistic so we couldn’t just build a set,” Vlasak says. “We had to use real pillars, real material.”

And while a few minor CGI touches will enhance the film’s final look, “here we’re using what’s in front of the camera.”