Home » Lifestyle » Ciara O'Connor: 'Greg O'Shea is like a KPMG intern obsessed with his career progress' 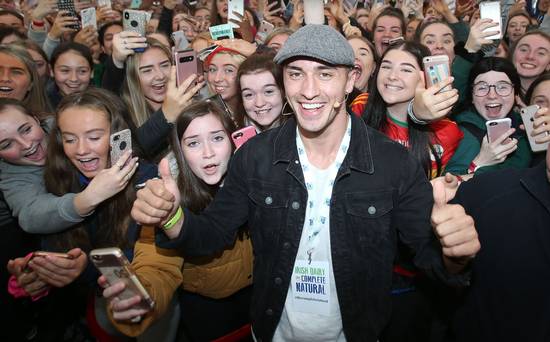 Ciara O'Connor: 'Greg O'Shea is like a KPMG intern obsessed with his career progress'

Is it me, or is Greg O’Shea absolutely obsessed with his career progress?

Honestly, the man is like a teenage KPMG intern, spouting his credentials and ambitions in detail with the least provocation.

The walking LinkedIn, who can’t seem to admit to himself and others that Love Island is the entire reason he has his career, mused: “I’m not exactly sure where I could fit or what my niche market it is. Obviously I’ve sport, law and now Love Island.”

Last week, he told us that, after his stint on 2fm, he is focusing on qualifying with the sevens team for the Olympics, but he wants to return to radio and television again – he even named the specific reality TV shows he’d be interested in (I’m a Celebrity seems to be pegged for later down the line, like ex-rugby player James Haskell who “did it at the end of his career”.

Like any good intern, Greg has a 10-year plan.

Greg, who has been disowned by the nation who voted for him to win Love Island alongside millennial sweetheart Amber Gill, knows exactly how to keep his home country happy. He humble-brags that he’s getting stick for “not following the celebrity lifestyle and moving to London and doing the whole Love Island thing”.

He has more cerebral dreams, you see – like becoming a radio DJ.

“Initially, I saw myself doing rugby, turning into a solicitor and being boring in an office pushing papers. This [his stint in 2fm] has now happened, and it’s put me in a junction at my life and we’ll see what happens.”

He muses that he could see himself doing “something like Ireland’s Fittest Family, maybe. Obviously, it’s quite Irish and very local”. Not moving to London! Local Irish television instead of Ex on the Beach! Be still my beating nationalism.

Your mother’s favourite son, Greg knows exactly what he’s doing – the UK chews up and spits out reality TV successes on a short and brutal cycle. Greg is playing the long game, courting the smaller and possibly less glam circuit here, in the knowledge that the Irish public mate for life with our home-grown talent. He’s no fool, Greg. Did you know he has a law degree? I’ve spent hundreds of hours and thousands of words musing on the enigmatic motivations of Ben Foden in his quest to alienate every human person and cleanse the world of goodwill.

The 34-year-old is currently engaged in a baffling stint on The X Factor: Celebrity, where he is in ‘boy’ band Try Star with fellow pretty former rugby player Thom Evans, and current player Levi Davis, who seems to actually be able to sing, God help him.

Last week, it transpired Foden was the driving force behind Try Star – he implored his agent to get him on, he gave Thom Evans the call (the call, it seems, he’d also been waiting for his entire life).

It was watching the thrill in his dead eyes as he slithered around the stage that you realised he had been practising simultaneously smiling and singing and choreographing one hand in front of the mirror for years. He didn’t want to be with Una Healy, he wanted to be Una Healy. He wanted to consume Una Healy and wear her musical talent like a cape. Proximity to pop royalty was enough, for a while – but Ben Foden knew he would never find peace until he became it himself.

We wondered why he was so relentlessly obsessed with trying to “clear his name” and ensure some blame was apportioned to Una after he was unfaithful and ended their marriage. He takes literally any opportunity to remind us “it wasn’t the only reason for our divorce”. We wondered why he was so intent on communicating how supportive and (privately) delighted Una was for him appearing on The X Factor, how she had “always” encouraged his music. Why couldn’t he just leave it alone?

Because no successful boy band has ever been born out of scandal and infidelity. Boy bands aren’t supposed to come with history, they are the blank repositories of all our hopes, dreams and teenage fantasies.

The other week, the performance ended with shirts being pulled open to reveal man-bods before the heavens of The X Factor stage opened and the rugby players were sensually soaked – was it a public baptism for Ben? A renewal, a rebirth, a purification, a cleansing? Or was it all the tears shed by cheated lovers around the world, or a biblical flood to rid the stage and world of a**holes? Where I was sitting, it all looked (like everything Ben Foden says and does) like a cry for help. I’m a Celebrity… Get Me Out of Here! or, as I like to call it, Schadenfreude!, is back on our screens and a frankly unbelievable 650,000 of us here in Ireland tuned in to watch the first episode. I suppose we get something different out of it to the Brits, not having an emotional cultural attachment to the likes of Kate Garraway. For us, I’m a Celebrity is more a dispassionate anthropological experiment.

But obviously, 2019 is the year of the reality TV token Paddy – Maura Higgins may not have been the official winner of Love Island, but she certainly won; Greg O’Shea sauntered in five minutes before the final and took (half) the crown; literal Paddy – Paddy Smyth – won The Circle recently; and Vogue Williams has captured Britain’s heart on her Channel 4 reality show, where her husband Spencer is merely tolerated. And so I’m a Celebrity is pushing Andrew Maxwell, of whom it seems nobody in the UK has ever heard.

The 43-year-old Dublin comedian distinguished himself from the first episode, telling perfect stranger Kate Garraway of breakfast television “Go on my love!” as she walked a 55-storey high plank.

We saw Andrew make Ian Wright snap by doing a full Mrs Doyle routine, repeatedly insisting on more crocodile feet for the ex-footballer who had been a bit off his food. We saw him in a helmet full of cockroaches, doing a closed-mouth never-ending primal scream that will surely haunt our nightmares.

And then, when they had to choose between themselves which two celebrities should be sent away from main camp to an unknown ‘outlaw’ camp, we saw Andrew establish his ultimate male-feminist credentials by arguing that the girls should not be allowed to opt-out of the random ‘names in a hat’ selection.

Sure enough, karma struck and he was selected himself to be exiled (alongside his love, Kate Garraway). The buffalo he cooked her, the nation’s sweetheart, was a bit chewy.