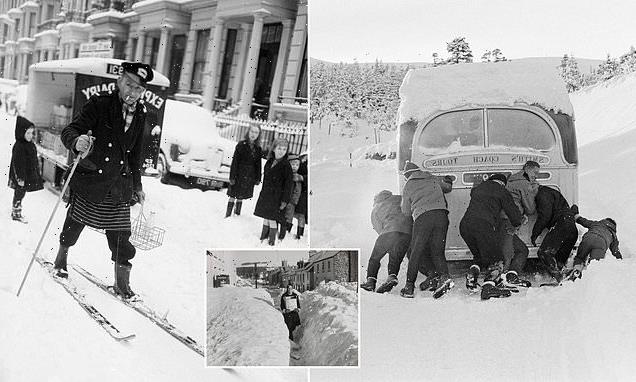 ‘Today’s snowflakes could never cope’: Channel 5 viewers reminisce over winter of 1963 which saw the UK experience months of blizzards and metres of snow – and even parts of the SEA froze in -2C temperatures

Although 2022 was touted as one of the toughest winters in the UK in recent years, it pales in comparison to the Big Freeze of 1962-1963.

After watching The Big Freeze last night, Channel 5 viewers were shocked to learn about the tough living conditions of Britain during the UK’s coldest winter of the 20th century, and the worst in England since 1740.

Temperatures plummeted to -2C in England and -19C in Scotland throughout January 1963 after a cold air front settled across the country in late December 1962.

Continuous blizzards covered England in thick layers of snow as high as 6 metres and the Thames and even parts of the sea froze due to the icy temperatures.

The 10 weeks of continuous snow led to amazing scenes, from people skiing to Earls’ Court, West London to children skating on frozen lakes in Wimbledon and Birmingham.

Poorer families went without heating and relied on RAF supply choppers for food and essentials after being snowed in.

As the show aired last night, viewers reminisced about their childhood during these tough 10 weeks, with some revealing how their parents had to cope with regular power cuts, life without heating and ‘draughty windows.’ 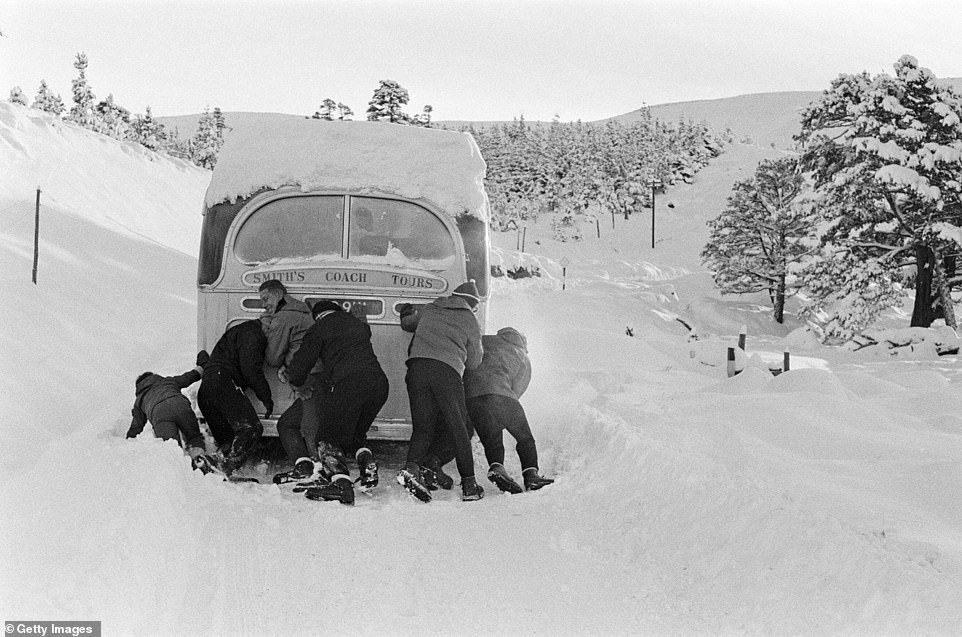 A Channel 5 documentary last night shed light on the tough conditions of the winter of 1962 and 1963, which is still the coldest winter the UK went through since the 19th century. People trying to move a van in the snow 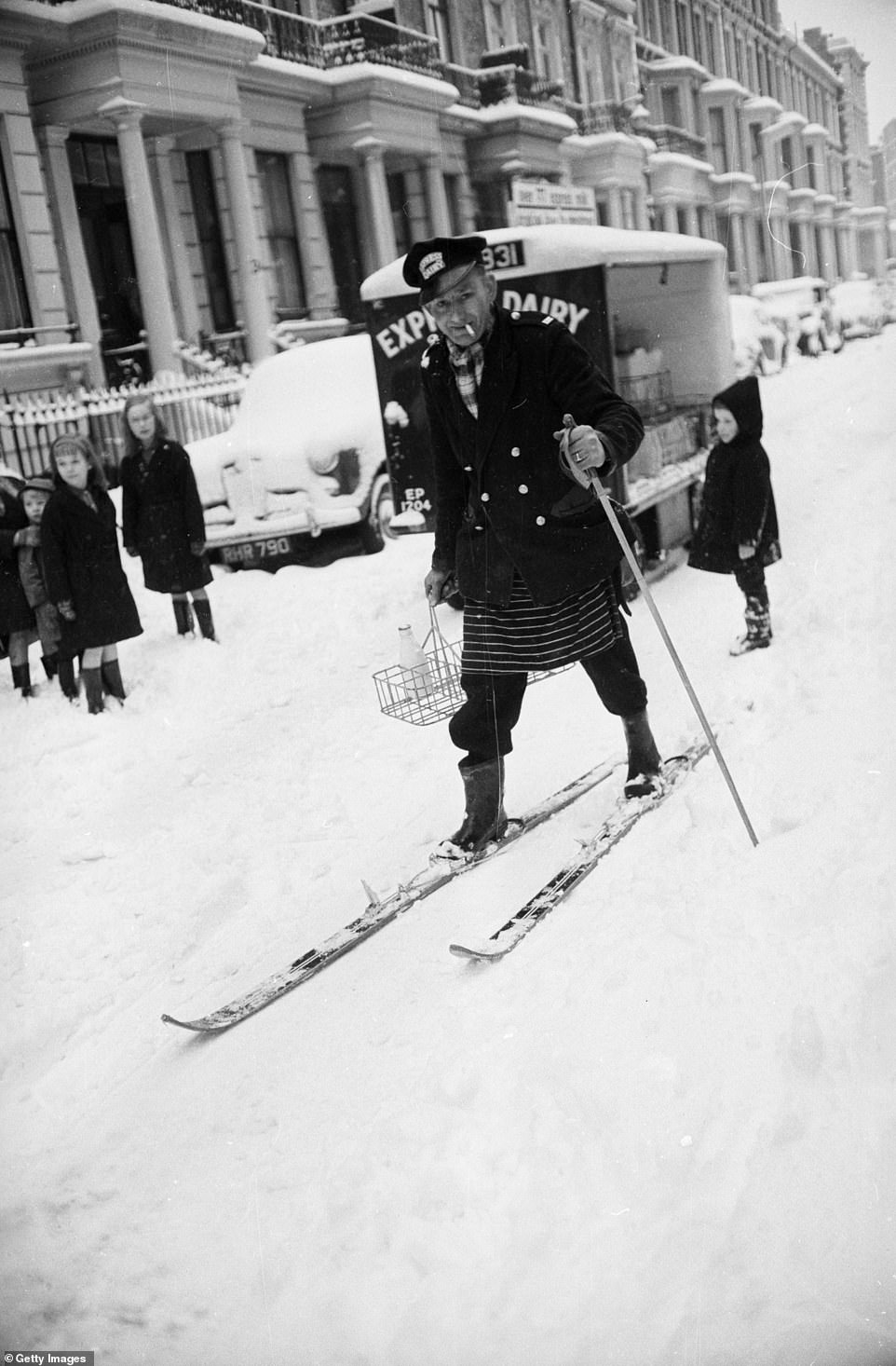 A milkman using skis to make his delivery in Earl’s Court, West London on December 29 1962, at the beginning of the Big Freeze

The freeze began on Boxing Day 1962 when snow started to fall across the UK.

The festive snowflakes soon turned to a destructive blizzard that buried some towns under 2 metres of snow on average, reaching up to 6 metres in some places.

It left people stranded in their homes without food or coal for heating, brought down power lines, leaving many already struggling families without electricity, and led to a disastrous milk shortage. 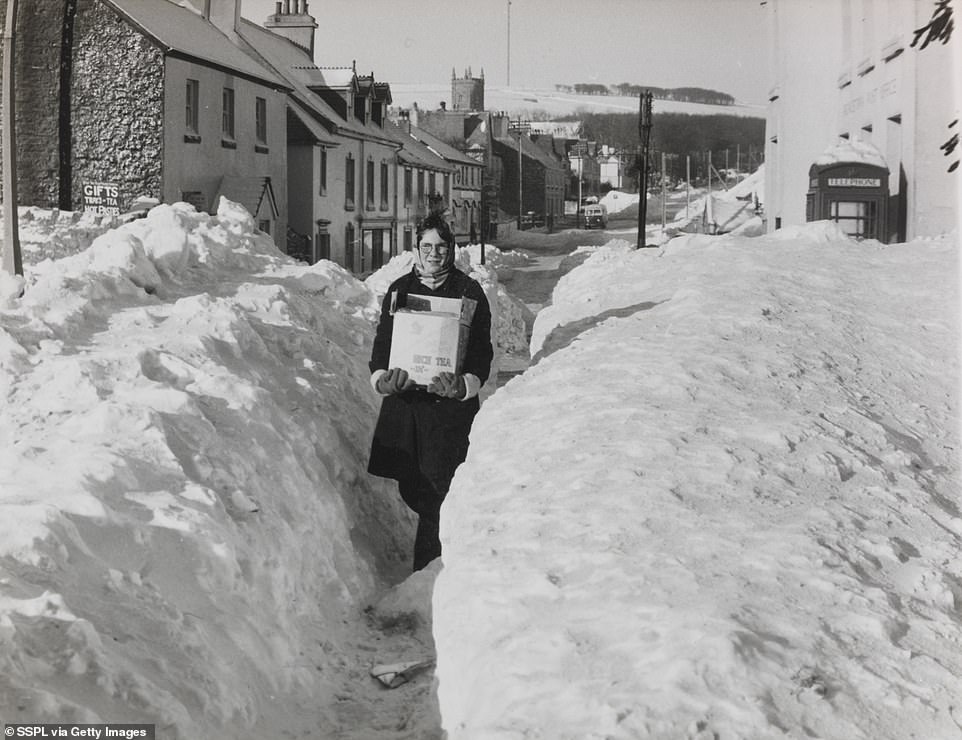 A woman carrying essentials in a street covered with snow in Dartmoor in 1963. Snow rift reached up to 2 metres in some places 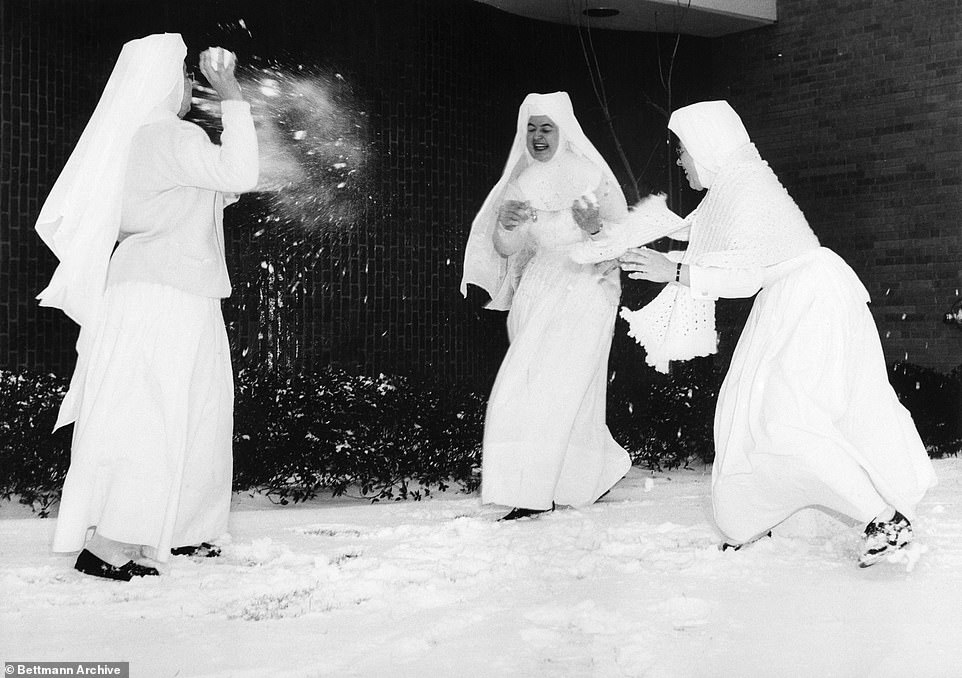 By January, the country experienced blizzards on a regular basis and dangerous freezing fogs and strong winds of reaching Force 8 on the Beaufort scale (gale-force winds).

The upper reaches of the Thames froze over, although London escaped because of the hot effluent coming from the Power stations in Battersea and Bankside.

She said the face flannels the pupils would use to wash would freeze solid on the washstand, and yet the school insisted the windows remained open for ‘fresh air’ in spite of the temperatures.

As the country learned to make do with the snow, incredible scenes unfolded in the cities, like in Earl’s Court, West London, where residents began skiing in the streets.

Milkmen had not choice but to put on their skis to deliver their orders. 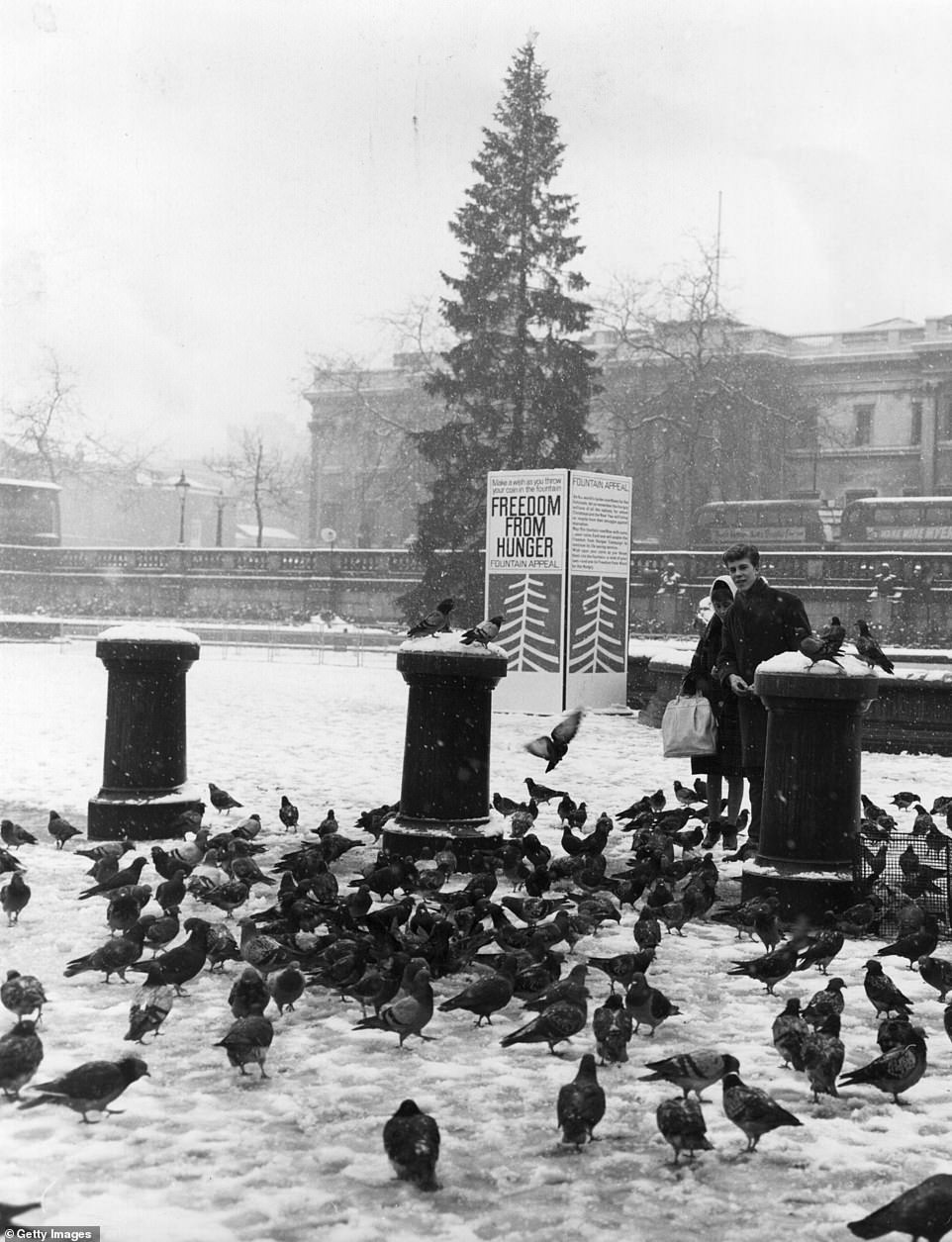 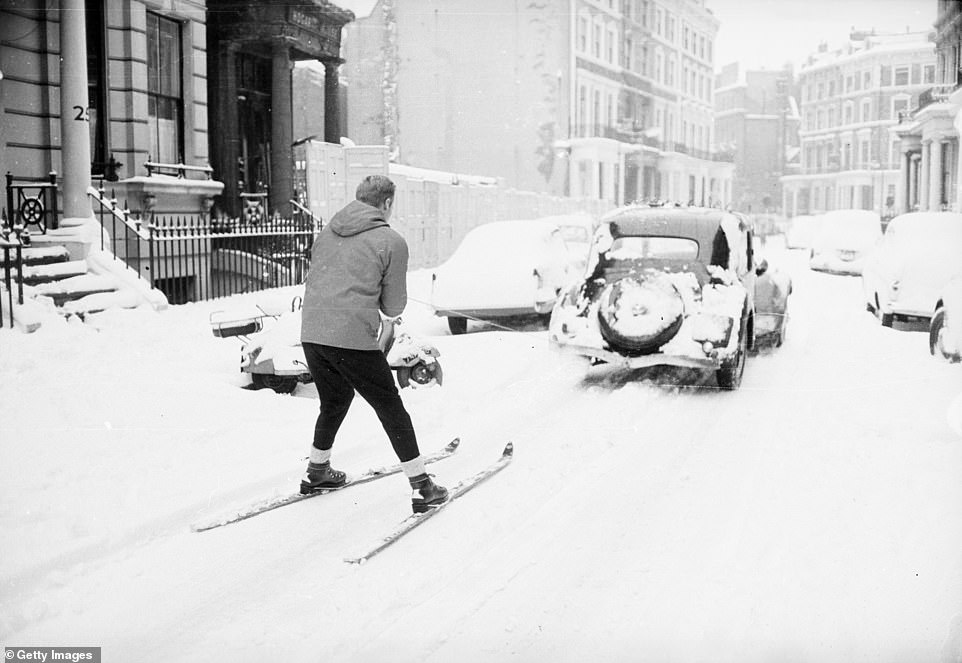 Incredible scenes unfolded in London, like this man who put his skis on and was dragged by a friend’s car in Earls’ Court on 29 December

Viewers who watched the programme with their elderly parents or who had experienced the freeze themselves as children agreed the winter had been particularly tough.

‘My mum said it was so cold in our flat (no heating except one fireplace) that when she brought me home from the hospital she was too scared to put me in a cot so she kept me wrapped up beside her overnight,’ one said.

‘Dad was made redundant in December 62; he decided to become a window cleaner and then #TheBigFreeze came along. Not much work for next 3 months! I was 4 yrs old and mum was housewife. No idea how we managed financially with no money coming in,’ another said. 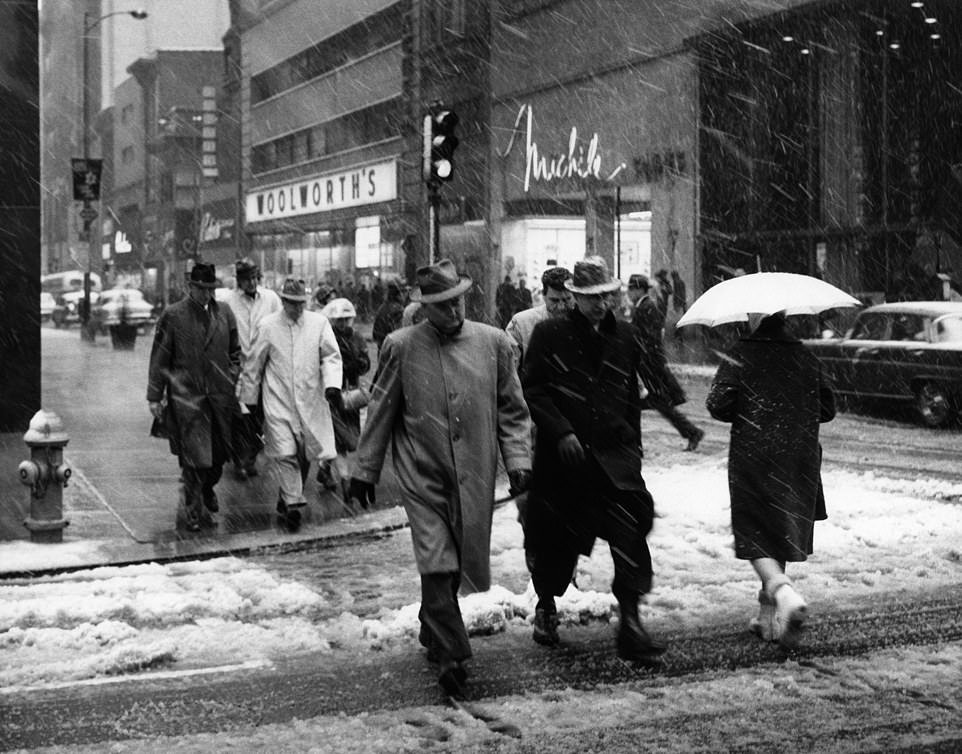 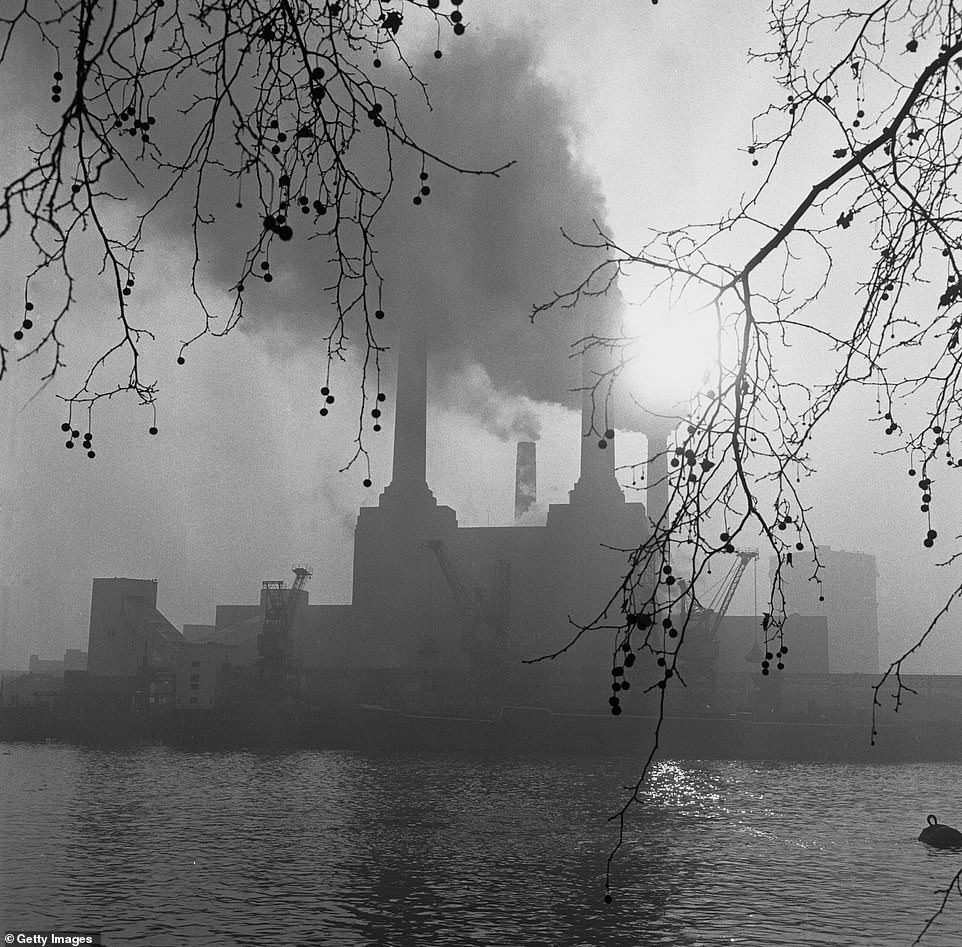 The Battersea and Bankside power stations’ hot effluents kept the Thames from freezing in central London by providing hot air. However, the upper reaches of the Thames froze outside of the city 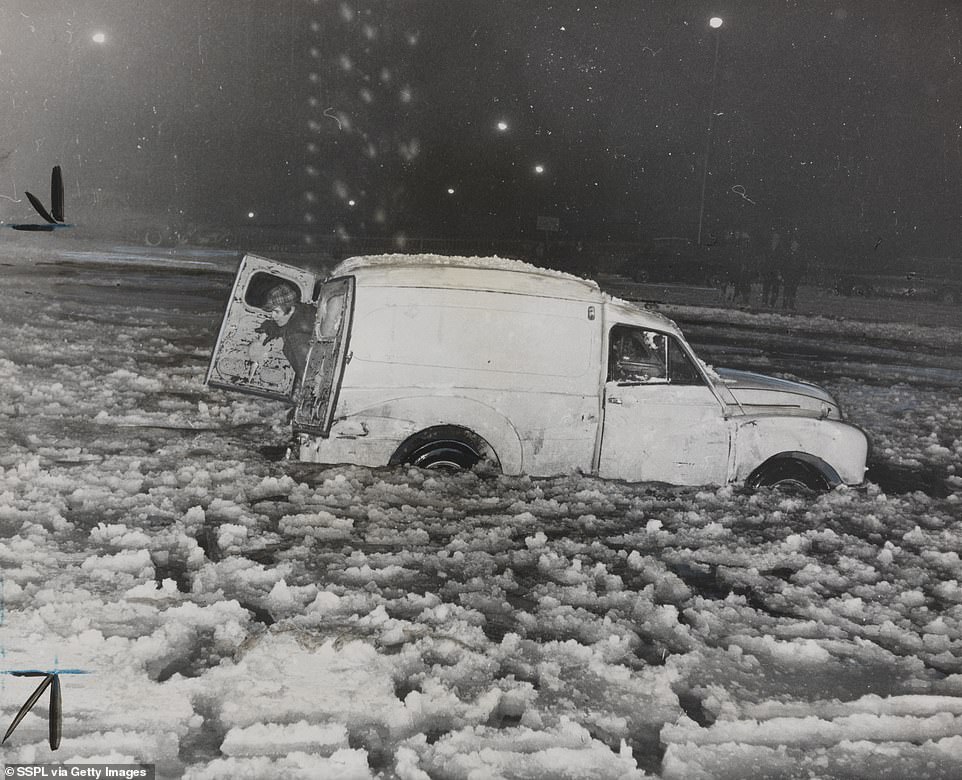 Pictured: a van who fell through the ice on Whitestone Pond, Hampstead Heath, in December 31 1962. The driver had missed the road, which was covered by heavy layers of snow

‘Yep, I remember winter of 63 well. The freeze went on for 12 weeks Draughty windows, lino floors & only heating from a coal fire, power cuts, only light from candles,’ another wrote.

‘Snow was 3ft to floor Imagine the mental health issues with today’s snowflakes if it happened now,’ another said.

‘Watching #thebigfreeze of 63 on C5. Mum agreeing with everything, no heating in bedroom, went to bed layers clothes wrapped in blankets & no inside toilet, but they just got on with it. UK now comes to standstill if we get single day of light flakes, let alone 10 weeks,’ one said.

For the people who were not born at the time of the freeze, the documentary was a wakeup call.

‘Blimey that winter of ’63 looked an utter nightmare,’ one said.

‘I was feeling sorry for myself earlier when my ancient boiler started to leak….but after watching this I feel like I can cope. My nannys would have done,’ another said. 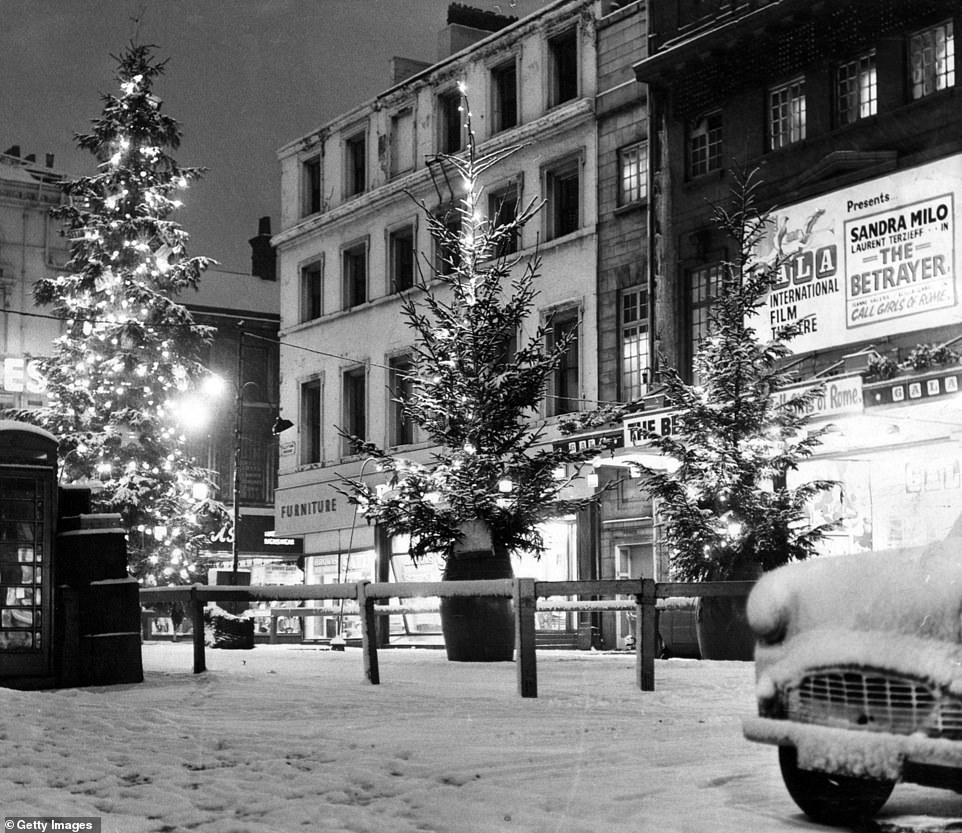 In Liverpool, Clayton Square looked like a Christmas card on the morning of New Years’ eve 1962. However, conditions became tougher as the snow kept piling on throughout the winter 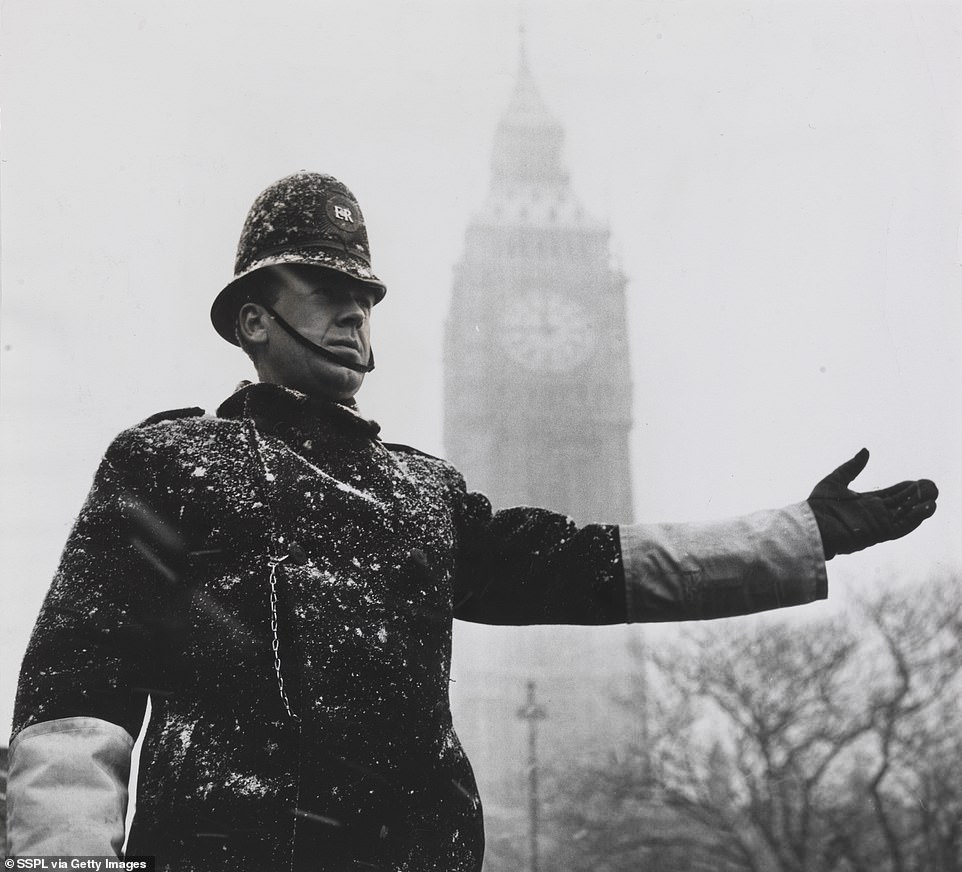 A policeman dusted with snow carried on his duties in Westminster as snow kept falling over the UK. The tough weather condition lasted ten weeks 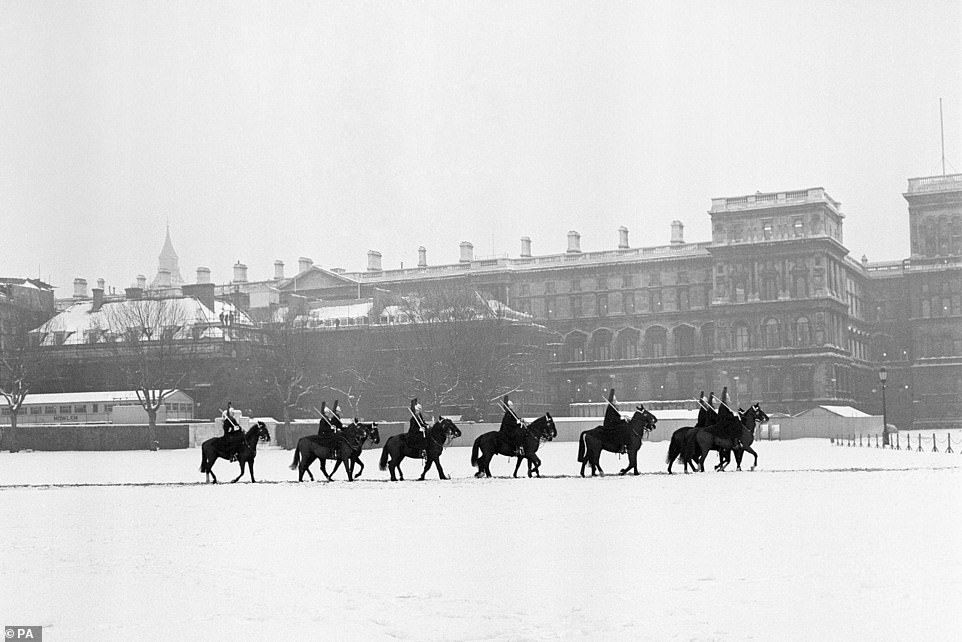 In spite of the snow and the tough temperatures, the Household Cavalry’s guard held their mounting ceremony in December 1962 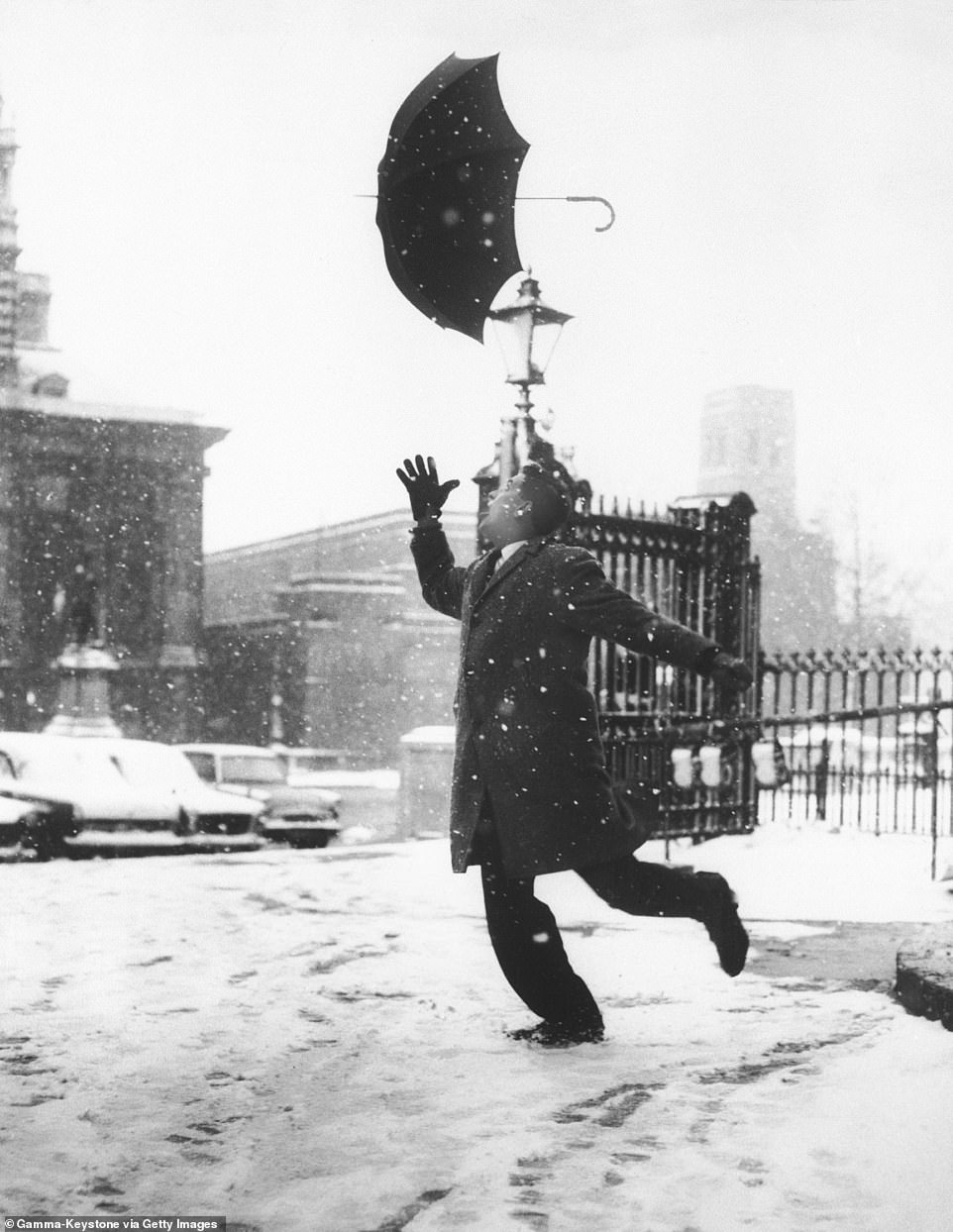 In late February 1963, London was still covered in snow and this Londonder lost his umbrella to a strong and snowy gust of wind

Viewers were amazed by the incredible archive footage shown in the documentary. Some said they could remember how tough the winter had been. For others who had not lived through it, it was wakeup call

How to help the people of Ukraine: 3 ideas for giving
World News