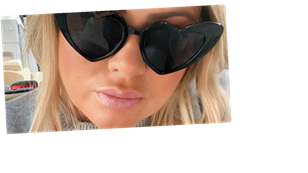 The Only Way Is Essex star Gemma Collins has recently had her hair extensions removed, and shared a snap to her Instagram account.

Under the stunning picture, where she is wearing black heart-shaped sunglasses, she wrote: “Classy, bougie, ratchet

Fans were quick to comment how amazing Gemma looked with the shorter, more natural hair.

One wrote: "Love your hair like this Gem, slaying it.

Another commented” “Love your hair like that Gemma! You look amazing!"

While a third added: “Your hair looks amazing shorter”

However, it isn’t just Gemma who has afforded fans a glimpse at her natural hair.

Former EastEnders star Jacqueline Jossa recently made the decision to have a rest from her long luscious locks in order to give her natural barnet a breather.

Taking to her Instagram Stories, the wife of Dan Osborne explained: "Guys I've taken my tapes out for my hair to have a bit of a rest.

“And I have to be honest, I feel completely and utterly bald, and like I have no hair.”

She continued: "It's actually not damaged at all it just feels thinner.”

It's good to have a rest from hair extensions from time to time to stop them putting strain on the roots, and we think Jac looks amazing au naturale.

The youngest of Kris Jenner's children, Kylie Jenner is famed for her multitude of hairstyles, as many as there are colours of her popular lip kit, and frequently wears wigs or has extensions attached to her tresses.

However from time to time the star returns to a god-given locks, and she looks incredible.

Back in March, Kylie showcased her natural hair on her Instagram Stories.

The make-up mogul gave her 196 million followers an insight into her stylish natural appearance via a pamper day, when her extensions had been removed and her chin length hair was revealed, covered in a hair mask of sorts.

It was not all entirely natural though, as the star still has hints of the lighter colour dye in her short mane.

With her hair parted down the middle, she looked stunning as she uploaded a video of the treatment alongside the caption: “roots almost there”.

Love Island star Laura Anderson, 31, recently showcased her natural hair which she described as a "mullet situation" while in the hairdressers.

Talking to her followers, Laura says, “Right gang, this is the reality of my hair.”

The star had her old extensions removed in order to change her colour from a honey blonde to a deep brunette, before a fresh set of hair extensions were applied.

Before having the new ones put in, the star took to her stories to show off her newly coloured locks – still rocking a short, choppy bob.

“So girls, this little mullet situation is what happens when you bleach your hair for your whole life,” Laura said.

Pointing the camera to her collection of tape extensions, the star says, ”Now I’m officially brunette, let’s get all of this hair in my head so I no longer have a mullet.”

Mullets are very in fashion at the moment, so she should be glad!

Rap queen Nicki Minaj, who has just given birth to her first child, often wears colourful wigs to perform, as well as has ultra long hair extensions.

However it turns out her natural hair is in fact still very long.

Taking to Instagram back in 2014, the Super Bass singer shared this snap of her holding her long hair in a tight pony tail above her head.

She captioned the image: "No Perm. No extensions."

CategoryLifestyle
TagsGemma Collins The Only Way Is