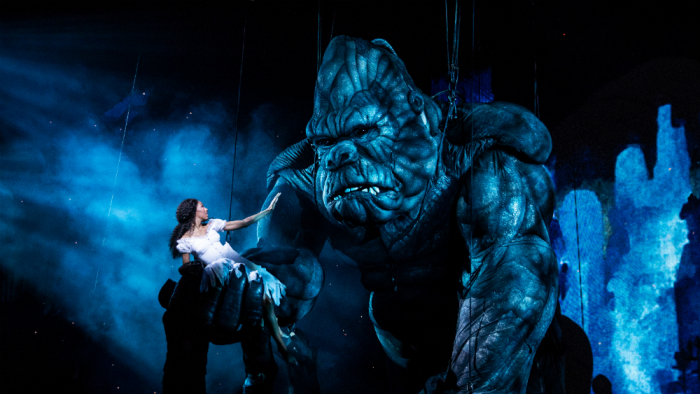 “He’s not a film, he’s theater!” says the movie director in the musical “King Kong,” when he realizes that the mighty creature he is about to capture is best presented on a proscenium stage.

After an earlier production in Australia and with the addition of a largely new creative team, the producers (led by Global Creatures) of this $35-million Broadway epic, based on the classic 1933 film, have re-envisioned the story in striking theatrical terms, using dazzling projections, super-sized puppetry and lush underscoring to create one thrill ride of a show. Topping the list of visual wows is the magnificent, moving and oh-so-expressive title character who, alas, is not eligible for a Tony.

There’s no mention of “musical” in the this musical’s marketing, which is probably a good idea. The show, directed and choreographed by Drew McOnie, disappoints in its mishmash of musical styles — “42nd Street,” “The Last Ship,” even Mel Brooks come to mind as the production runs its course. Individual songs by Eddie Perfect (“Beetlejuice“) are blandly generic and forgettable, though Marius de Vries’ score and Christopher Jahnke’s orchestrations give the show a kind of cinematic swept, as well as transitional cover and emotional underpinnings.

Jack Thorne, an expert at scripting shows of immense size, sweep and wonder — he penned “Harry Potter and the Cursed Child” —  here is a narrative minimalist, concentrating the sizable story to just a trio of characters — and one who doesn’t speak at all. Kong doesn’t sing or dance, but you could say he has one of the best 11 o’clock numbers around when he approaches the apron of the stage to break through the fourth wall.

There’s also more than a few cliches, and a set-up that’s a stretch. “We’re following a map acquired from a Norwegian to an island I don’t know much about,” says filmmaker Carl Denham (Eric William Morris). Uh-huh.

But Thorne also makes some smart choices. Gone is the indigenous tribe of the film, the hokey human romance and the helpless damsel-in-distress template, certainty out-of-date for these female empowerment times. In its modern rethink, the production presents a Wonder Woman of a heroine impressively played by Christiani Pitts.

Unlike the film, this Ann Darrow is more than the sum of Fay Wray’s screams. This new indefatigable dame can — and does, no thanks to the guys — save herself and others, time and again. In one of several sly twists on the movie, this Ann even has trouble showing terror, much to the frustration of Denham, who needs his star to be nothing but a victim in a slinky dress.

Not this gal. Thorne shifts the narrative arc from the film’s Ahab-like pursuit of Kong by Denham, to the personal journey of Darrow, newly arrived to Gotham from the sticks, with dreams of making it big as an actress. (Yawn.) But with no showbiz break, she finds herself homeless and standing in a Depression-era soup line. Things change when her path crosses with the charming-then-smarmy Denham — played with snap and well-sung by Morris — who promises to make her a star on a mysterious movie project. In a flash they’ve set sail across the Atlantic — along with Denham’s gofer Lumpy (sweetly played by Erik Lochtefeld) — for the now-uninhabited Skull Island. Here the musical finally gains momentum, suspense and fascination with the appearance of Kong and the show’s burgeoning love story.

The giant creatures are works of art in themselves, designed with both detail and just-enough-abstraction by Sonny Tilders and manipulated by a dozen athletic onstage puppeteers plus a quartet of animatronic operators, including one live growler. Peter Mumford designed the lighting and Peter Hylenski the soundscape for these worlds of mystery on sea, land and air — and the Empire State Building, too. Kong’s furious dash to 34th street with Ann riding on his back — who’s on top now? — is one of the highlights of the show.

But it’s not just the mammoth Kong that helps carry the show but also Pitts, who plays the marathon role of Ann with infinite resilience and resolve, and sings heroically.

The show should attract eager spectacle-seekers and curious fans of the film. Whether it connects emotionally to audiences to ensure a long and profitable run on Broadway could rest on those big, dark eyes of the title character. And they’re pretty dreamy.