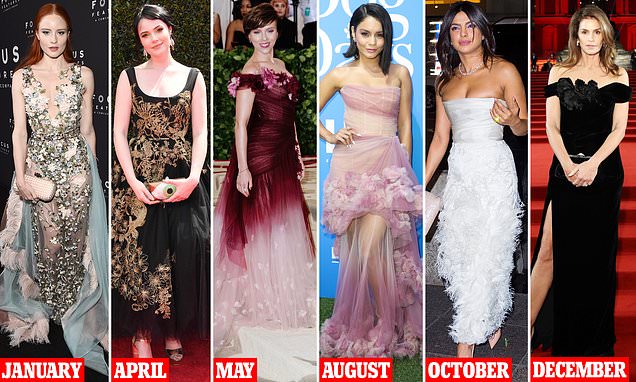 Marchesa makes a comeback: Cindy Crawford becomes the latest star to wear label owned by Weinstein’s ex-wife after it narrowly avoided a Hollywood boycott – and her £5k dress is almost sold out

Cindy Crawford has become the latest star to wear Marchesa on the red carpet as the troubled label continues its red carpet comeback.

The supermodel wore a slinky Marchesa LBD to last night’s British Fashion Awards in London, following hot on the heels of Priyanka Chopra who chose the label for her bridal shower in October.

The fashion house co-founded by Harvey Weinstein’s ex-wife Georgina Chapman was thrown in to disarray last year following the tide of sexual abuse allegations about the movie producer, which he strenuously denies.

But with everyone from Scarlett Johansson to Vanessa Hudgens embracing the label once more, it appears to have firmly reestablished itself as a red carpet linchpin.

Indeed, Crawford’s £5,000 off-the-shoulder appliquéd velvet gown is already sold out or low in stock after she wore it at the Royal Albert Hall last night. 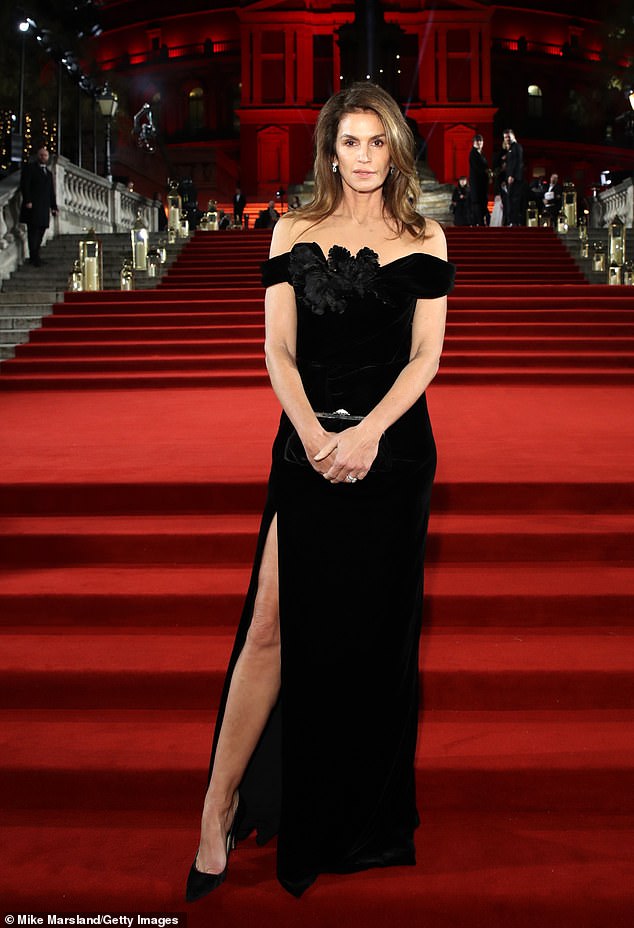 Defiant: Cindy Crawford has become the latest star to wear Marchesa on the red carpet as the troubled label continues its red carpet comeback, and her £5,000 off-the-shoulder appliquéd velvet gown is already sold out or low in stock after she wore it at the Royal Albert Hall 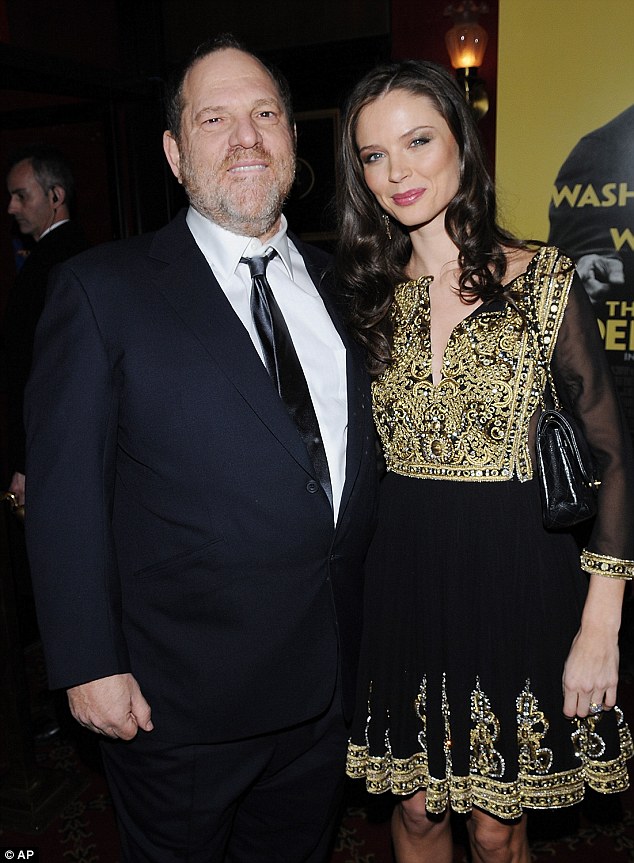 There were rumours that Weinstein (pictured with ex-wife Georgina at a premiere in New York City before their split) may have pressured stars into wearing Marchesa’s designs and some activists called for women to boycott the label, but it appears to be making a comeback

Prior to her wedding, Priyanka Chopra was forced to defend her decision to wear a feathered white dress designed by Chapman at her pre-wedding party.

Stating that Chapman – who left Weinstein in October 2017 following a string of damning accusations – was ‘a friend of hers’, the Indian beauty argued it was wrong to take out his wrongdoings on a ‘self-made woman.

She told Who What Wear: ‘Georgina’s a friend of mine, and she has been. And it’s not her fault.

‘And I don’t think it’s right to take it out on a self-made woman what somebody in her life did. That’s the wrong attitude.’

She added: ‘That was a beautiful gown, and deserved to be worn by a bride-to-be. And it made me feel like a princess. It was the right choice.’ 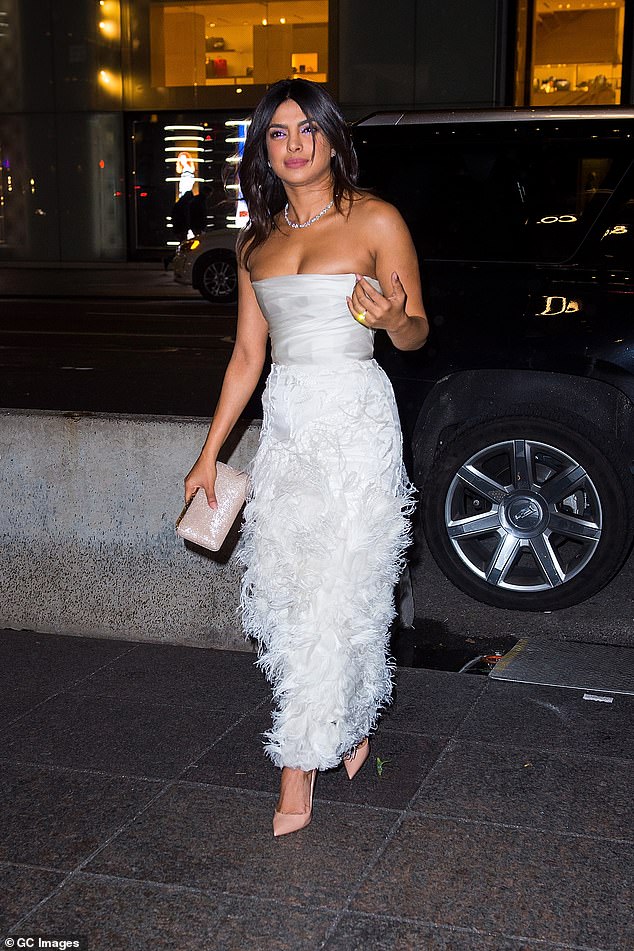 Priyanka Chopra was forced to defend her decision to wear this feathered white dress designed by Chapman at her bridal shower at Tiffany’s Blue Box Cafe in New York City, October 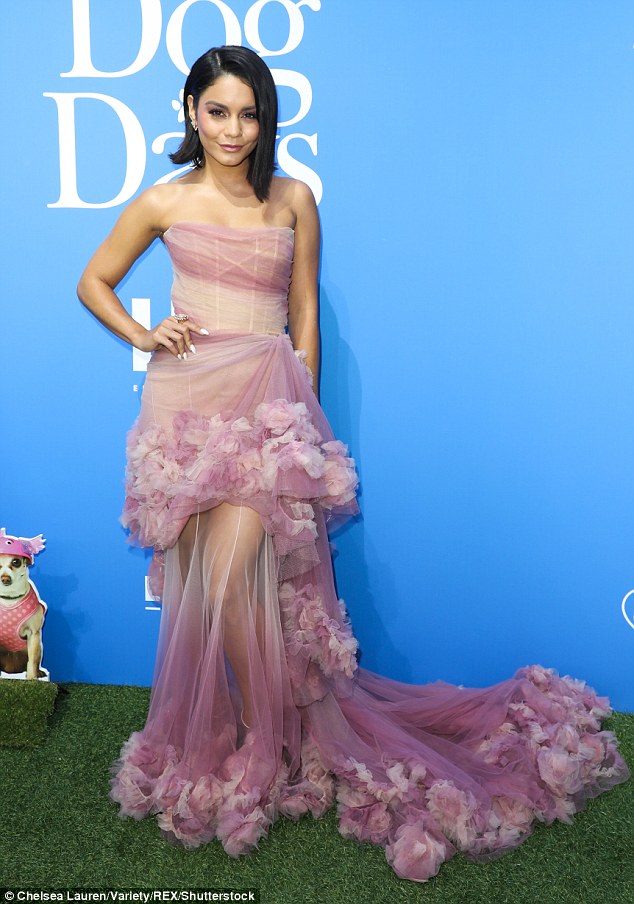 In Marchesa back? High School Musical star Vanessa Hudgens became the latest star to wear a dress from Georgina Chapman’s troubled fashion label in August – sparking rumours that the label could be making a comeback after taking a hit following allegations against Weinstein 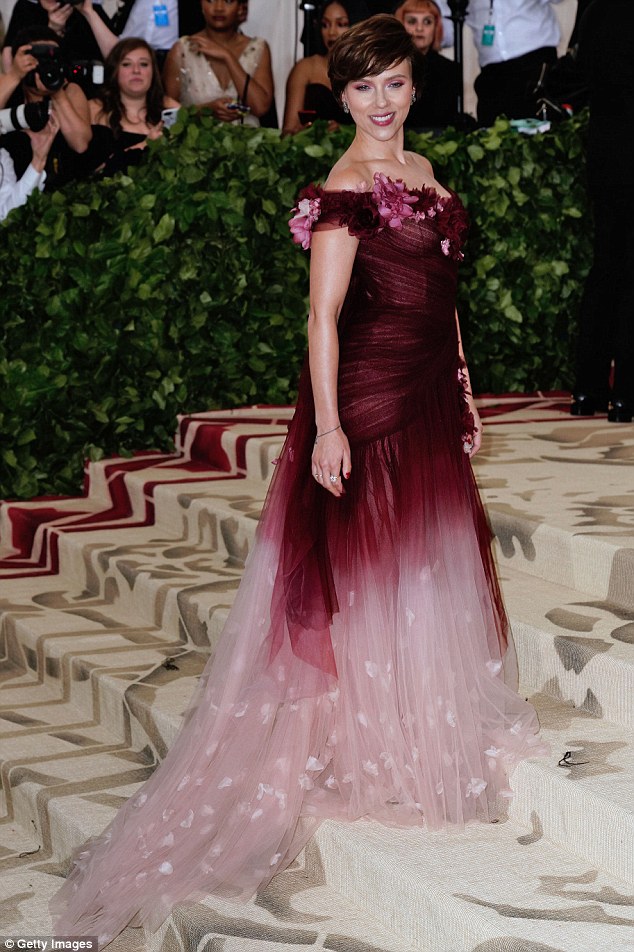 The company co-owned by Georgina Chapman and Keren Craig saw its stock plummet following sexual assault and rape accusations against Harvey Weinstein from a string of women last year.

There were rumours the shamed Hollywood heavyweight had, in the past, ‘pressured’ high-profile actresses into wearing Marchesa’s creations to boost its profile, while unconfirmed reports suggested he may have ploughed cash into the company in its infancy.

When awards season arrived, the brand – loved by everyone from the Duchess of Cambridge to Chrissy Teigen – was notably absent from the red carpet at the Golden Globes, Oscars and BAFTAs. 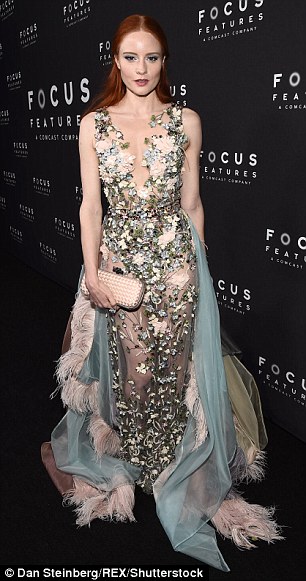 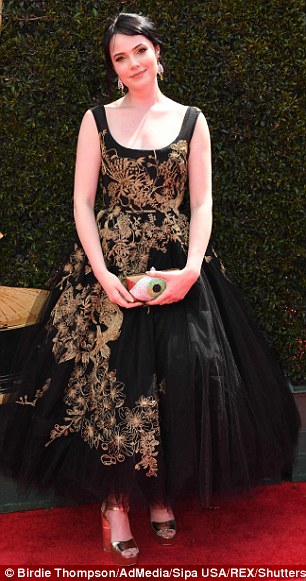 Making a comeback? German supermodel Barbara Meier wore Marchesa earlier this year (left), followed by The Young and the Restless star Cait Fairbanks in April (right) – albeit on loan

Some accusers, including Italian actress Asia Argento, even called for women to boycott the brand altogether.

But in May, Scarlett Johansson – one of the highest-paid actresses in Hollywood – wore custom Marchesa to the Met Gala in New York in a move which won public support from fashion doyenne Anna Wintour.

Johansson was forced to defend her choice, saying: ‘I wore Marchesa because their clothes make women feel confident and beautiful, and it is my pleasure to support a brand created by two incredibly talented and important female designers.’

That same week, Chapman was profiled in a sympathetic interview in American Vogue,and since then, a host of stars have tentatively followed suit.

In August, High School Musical star Vanessa Hudgens became the next celebrity to make a statement in Marchesa at a film premiere in LA. 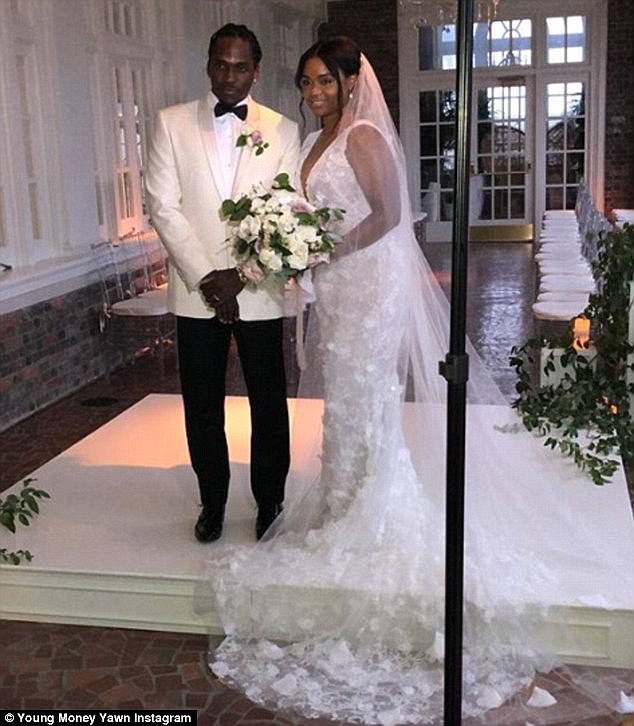 Virginia Williams opted for Marchesa when she tied the knot with rapper Pusha T in June this year, in a star-studded ceremony at the Cavalier Hotel in Virginia Beach

Marchesa’s bridal gowns have even been snapped up by the likes of rapper Pusha T’s wife in June, and Senator John McCain’s daughter Meghan shortly before Christmas 2017.

Speaking to MailOnline FEMAIL in August, stylist and designer Lucas Armitage (poisedlondon.com) said: ‘When Scarlett Johansson wore Marchesa to the Met Gala it was the first time a celebrity from the A-list pack had been seen in the brand since the Harvey Weinstein scandal hit.

‘It was always going to be a huge feat for the brand to bounce back as its success was always entwined with Harvey.

‘While it’s clear Chapman had a huge advantage whilst trying to make her name as a dress designer of choice for the A-list it seems not everyone thinks her former links to Harvey should see he death of her brand. 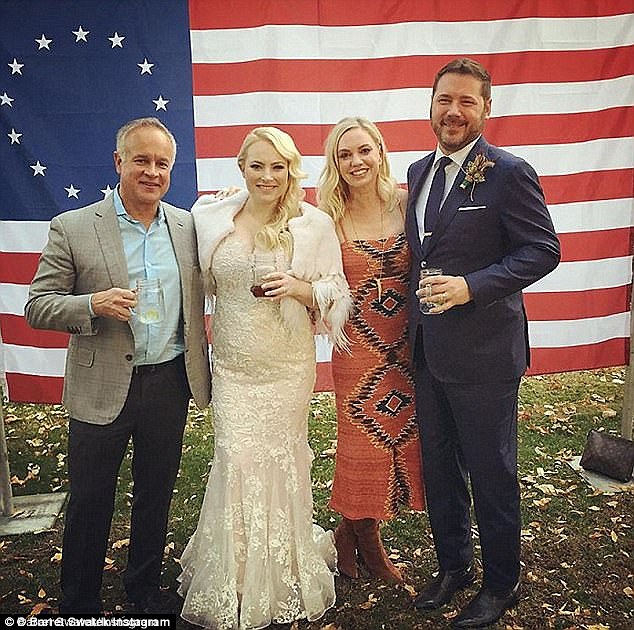 Meghan McCain, daughter of Senator John McCain, wore Marchesa at the height of the Hollywood sex scandal when she married her beau Ben Domenech in December

‘And it’s clear without the former persuasive force of Harvey the brand is still one that people may wear.

‘In the fashion industry a scandal isn’t unusual and usually when the dust settles if a collection is beautiful it will always be in the red carpet, here Marchesa is testament to this.’

Marchesa was founded in 2004, the same year that Chapman and Weinstein met, and enjoyed instant success, thanks to a handful of actresses who boosted its profile by wearing some of its earliest gowns to premieres and events.

In October 2017, Felicity Huffman claimed that Weinstein had threatened to pull publicity funding for her 2005 film Transamerica if she didn’t wear his now ex-wife’s gowns on the red carpet.

How has Georgina Chapman responded to the Harvey Weinstein sex scandal?

. Weinstein issues an apology admitting he has ’caused a lot of pain’ but denies sexually harassing female colleagues

. Over the following days and weeks, dozens of actresses and film industry insiders come forward with accusations of inappropriate behaviour, including harassment, rape and assault at the hands of Weinstein

. 11 October 2017: Weinstein’s wife and mother of his two children, Georgina Chapman, announces she is leaving her husband.

. In a statement to People, she says: ‘My heart breaks for all the women who have suffered tremendous pain because of these unforgivable actions. I have chosen to leave my husband. Caring for my young children is my first priority and I ask the media for privacy at this time.’

. January 2018: Marchesa cancels its Fall Fashion Week show amid rumours Chapman ‘couldn’t go through with it’; she later explains it was a ‘time of mourning’ for her and her fashion label

. February 2018: Marchesa is notably absent on the red carpets during awards season; Chapman later reveals she deliberately declined to offer her designs to celebrities because she ‘didn’t think it was appropriate’

. May 2018: In her first interview since the sex scandal broke, Chapman tells Vogue that she ‘never’ suspected any wrongdoing on her husband’s part.

. The same week, Scarlett Johansson wears Marchesa on the red carpet at the Met Ball and Anna Wintour publicly offers her support