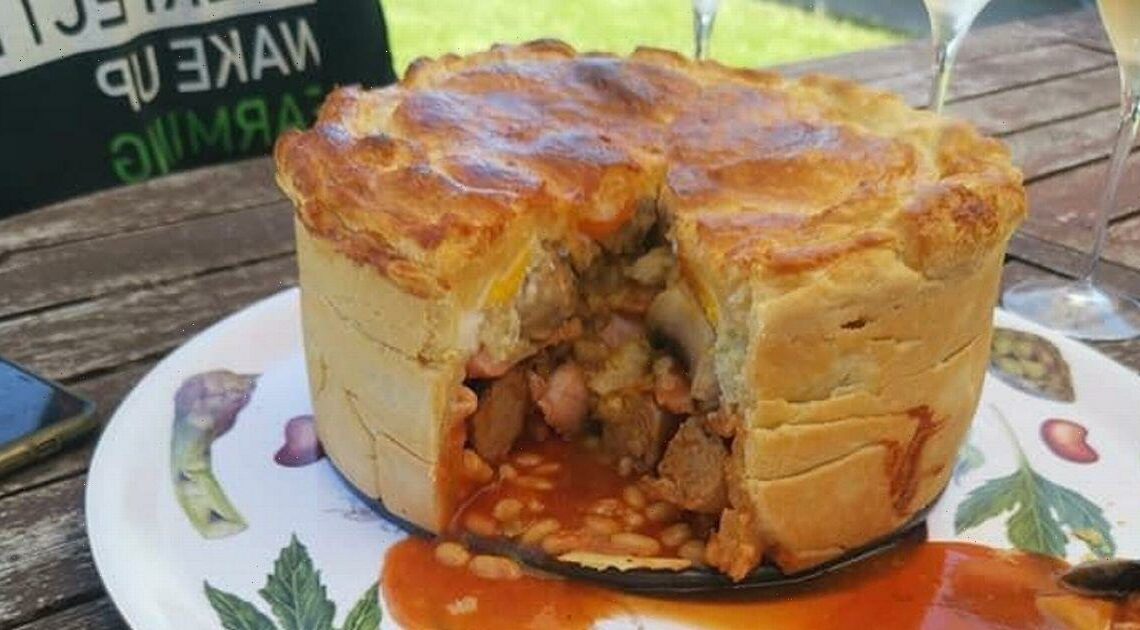 British cuisine gets a lot of flack around the world, but there are certain foods we’re known for making.

The full English fry up and a huge variety of savoury pies are well known and loved.

However, one foodie on the Reddit sub-forum R/CasualUK revealed that his pal had combined the two famous English foods in an unusual way.

In the snaps a huge, shortcrust pastry pie can be seen.

Would you happily tuck into this pie? Tell us in the comments…

When cut into the insides of sausage, mushroom, bacon, fried eggs and baked beans poured out.

And, hundreds of people liked the post, but not all of them could decide whether they would try the dish.

One commenter said: “This is hideous and amazing all at the same time.”

“Torn between yelling treason and asking for a slice,” added another.

A third said: “Its an abomination but it’s marvellously well executed.”

And others were confused about how to serve the pie – with mash, gravy or more beans.

“Should it have some mash to go with it too? But if so, should it be with bean juice or gravy?

“That is the big question for me…"

To which one poster replied: “This might be heresy of sorts, but I would definitely go with gravy over bean juice.

And another added: “Just reading that just made me realise, that there are moments where 'rules are meant to be broken!' and this is one of them.”

Others recommended lashings of brown HP sauce while another said to shove the slice in a “bap”.

But, still some posters refused to like the pie.

One said: “I'd be ok if there weren't beans.

“It is beautiful but I don’t know if I could eat it, all the same,” added another.

As M.L.B. Honors Lou Gehrig, It Shines a Spotlight on A.L.S.
World News