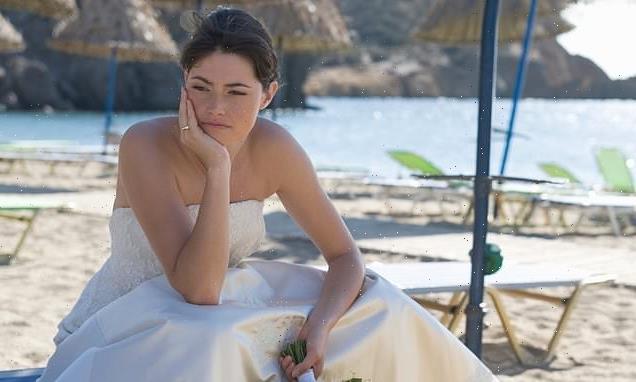 Bride with 'no friends' faces wedding day without any bridesmaids

A bride-to-be has said she is filled with dread about her big day after saying she has ‘no friends’ she would want as her bridesmaids – while others assured her it’s normal to have a low-key bridal party.

The bride, called Jennifer, posted on the forum of wedding website Hitched to say she doesn’t feel she has close enough female friends to ask them to be her bridesmaids and asked others if this was normal.

Writing on the forum the 30-year-old from Essex said she always imagined having a ‘girl gang’ to celebrate her wedding day with – but she now finds she has drifted from her old female friends.

Commenters responded to assure Jennifer that, despite tradition, they weren’t planning on having lots of bridesmaids, and urged her not to feel pressured by Hollywood clichés about what weddings should be like. 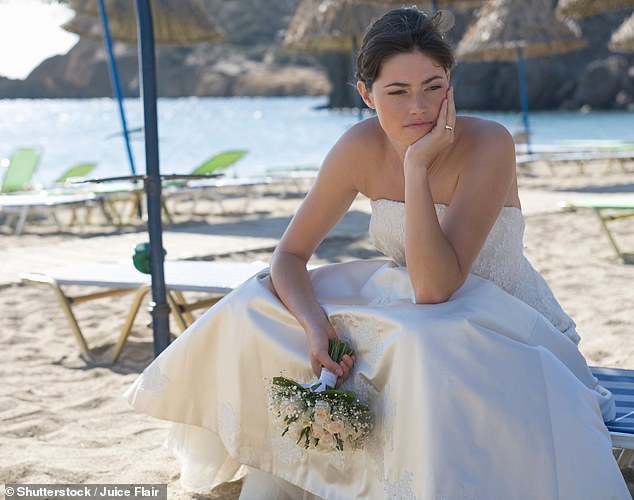 The bride, called Jennifer, from Essex, says she is filled with dread over the idea of not having any bridesmaids by her side as she walks down the aisle (stock image)

Jennifer wrote: ‘I always imagined myself to have one of those weddings surrounded by a girl gang that had known me forever and dancing the night away surrounded by my pals.

‘I used to have friends but we drifted years and years ago when I moved down south and I don’t seem to have had much luck when it comes to making new ones – although certainly not for a lack of trying.’

According to the lonely bride, her beau isn’t having anywhere near as much trouble picking out people to celebrate the day with him.

She wrote: ‘My boyfriend has an army of groomsmen, he’s even struggling to make a decision on the final cut.

‘I just feel like it’s going to be so embarrassing on the day.’ 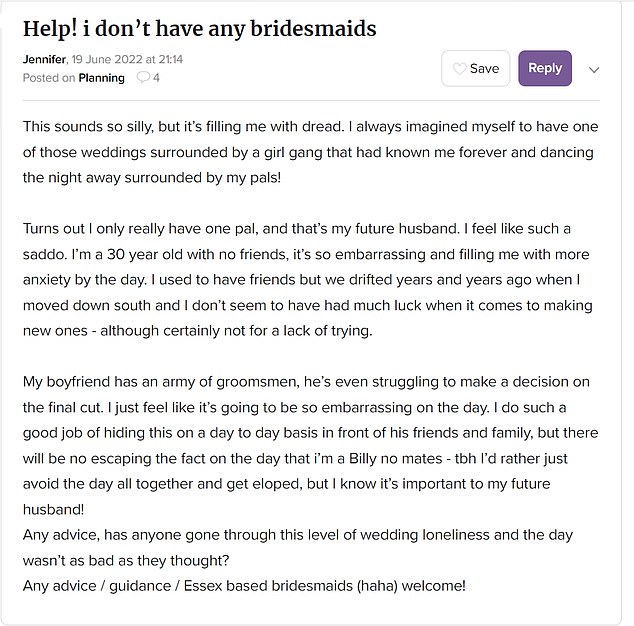 Writing on the forum of wedding website Hitched, the 30-year-old said she was feeling anxious about the decision as the big day approached

While the bride says she is doing a good job of hiding her anxiety from her family and her husband-to-be, she added there will be no escaping the reality on the wedding day that she is a ‘Billy no-mates.’

She added the issue is causing her so much worry she would prefer to elope with her fiancé, but the popular groom-to-be doesn’t want to.

Describing herself as a ‘saddo’ Jennifer asked others if ‘wedding loneliness’ was a normal experience to have and if it ruined other brides’ big days.

She also joked she was in the market for ‘Essex-based bridesmaids’.

In response, women came forward to assure her they were in the same boat and understood her dilemma.

One bride, called Emily, reassured Jennifer that she wasn’t having any bridesmaids either and was opting for a more understated ceremony.

She wrote: ‘I don’t really have any close girlfriends. Also, the idea of an OTT hen do is my idea of hell!

My sister who got married last year didn’t have bridesmaids either. I’m quite relieved she didn’t make me wear a fluffy pink number!’

Another bride said she was in a ‘similar position’ and was planning to have a relaxed morning on her wedding day with her sister.

She wrote: ‘I feel like weddings get romanticised in movies and reality TV and it can make people anxious (myself included) about not having a wedding that fits into the stereotypes.’ 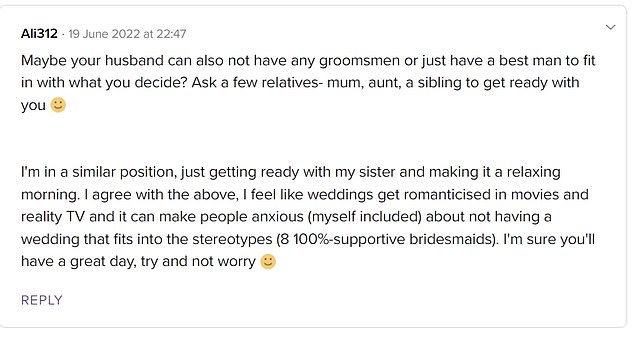 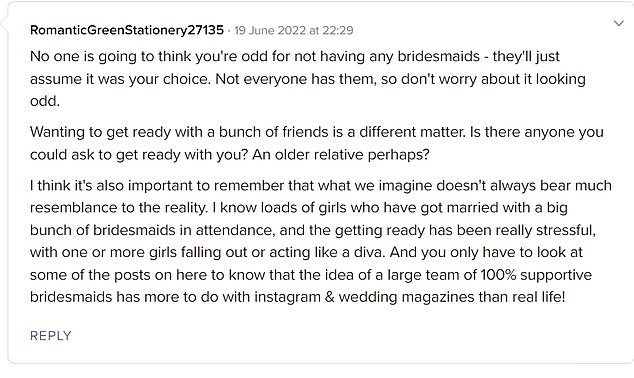 Another bride called Sam, who is also based in Essex, added she had chosen a couple of bridesmaids but her party was nowhere near as big as her groom’s was set to be.

She wrote: ‘I feel in a similar boat with only really one best gal friend and my twin sister and small family in comparison to my groom’s army of groomsmen, two best men a giant family and extended friend group.’

She also advised Jennifer to consider asking her grandmothers to be bridesmaids if they are still around.

Another bride-to-be suggested: ‘Maybe your husband can also not have any groomsmen or just have a best man to fit in with what you decide.’

Caleb Swanigan Passed Away at 25