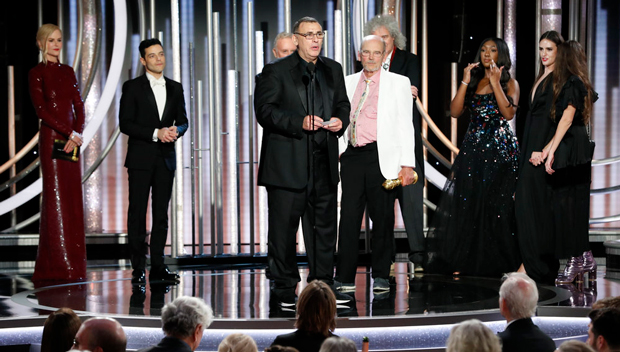 ‘A Star Is Born’ was shutout in the major categories at the 2019 Golden Globes. We’ve got fan reaction on how they’re upset the film lost Best Drama Motion Picture to ‘Bohemian Rhapsody.’

Fans are calling foul for Bohemian Rhapsody taking the Best Picture in a Motion Picture win at the 2019 Golden Globes over Bradley Cooper‘s critically lauded directorial debut A Star Is Born. While Bradley’s masterpiece starring himself and Lady Gaga in the lead roles was favored to win, the Freddie Mercury biopic took the top honors in a surprise upset. ASIB made many critics Top 10 Best Films list for 2018, while Bohemian Rhapsody wasn’t a hit among critics. Still, the Hollywood Foreign Press Association’s members lauded the film and it’s not going over well on the Twittersphere.

“It’s tempting to be like ‘LOL Golden Globes, you’re drunk’ But if these awards for Bohemian Rhapsody trick anyone into thinking that it’s good, or anything but an insult to Freddie Mercury’s legacy, then that is a travesty,” one person wrote over the major upset. Even Bachelor in Paradise star Ashley Iaconetti was angry, as she tweeted “Anyone who actually thinks that Bohemian Rhapsody was a better film than A Star is Born is wrong.”

“#BohemianRhapsody has some good moments. Rami Malek gives his all as Freddie Mercury. But the film treats Freddie’s homosexuality like it’s a cancer on his life and career,” one fan claimed while another added “I don’t know what’s worse, Malek beating Cooper for best actor or Bohemian Rhapsody beating A Star is Born for best movie. Both ridiculous, but then again it is the #GoldenGlobeAwards.”

Rami Malek won Best Actor in a Motion Picture Drama at the Globes for his portrayal of Freddie, and his performance was lauded by critics as breathtaking. But the film itself was not that well received by critics. While A Star Is Born received a 90 percent “fresh” rating from 441 critics via Rotten Tomatoes, Bohemian Rhapsody only has a 62 percent “fresh” rating from 335 critics.

It wasn’t a good night for ASIB. Bradley was up for Best Actor and Gaga up for Best Actress, in addition to Bradley’s nom for Best Director. They all came up short with the only award for the film going to Gaga’s Original Song win for “Shallow.” The HFPA tends to go their own way and their love of the film based on Queen’s frontman could have played more favorably to their foreign voting journalists than the very American musical star on the rise versus one on a downward spiral remake.  The Oscars are just under two months away and it’s more likely that A Star Is Born will feel more love there.