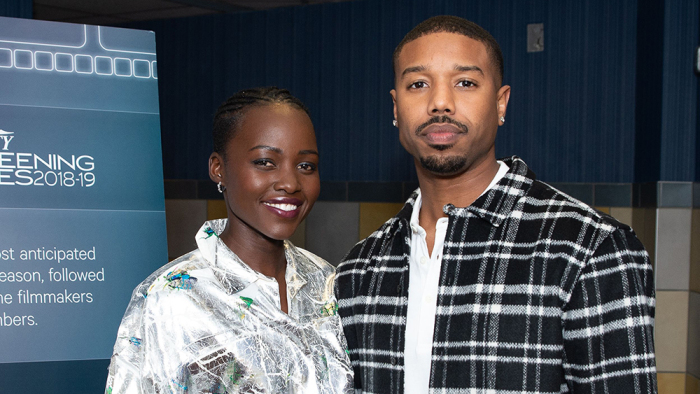 ‘Black Panther’s’ Michael B. Jordan and Lupita Nyong’o on Wakandan Women and ‘Owning Your Identity’

After Jordan joked that he knew it had become a genuine phenomenon once he “started seeing the memes,” they expressed their love of seeing fans embrace their excitement by dressing the part — whether that means Wakandan cosplay, or their own traditional garb. “I love how personal people make this film,” said Nyong’o, adding that it’s incredible to her that people were “embracing their heritage” whether in the movie theater or while interviewing the cast.

Both actors had no shortage of praise for Ryan Coogler, the director and co-writer who brought “Black Panther” to such vivid life. “He cares about everything he does,” said Jordan, who counts Coogler as his most frequent collaborator and friend. “He doesn’t get involved with anything he can’t connect with. From ‘Fruitvale Station’ to ‘Black Panther,’ he has the same approach. Everything matters.”

Nyong’o, who plays super spy Nakia, credited Coogler’s respect for the women in his life as the reason why “Black Panther” has so many formidable and distinct female characters. “He was hellbent on having women in his film that reflected the women he grew up around,” she said. “They’re layered, complex, and have agency. And so he really wanted Wakanda to have that, and to be an example of what a society can be like when it allows all its citizens to realize their full potential.”

Now that “Black Panther” has proved the power of representation to the tune of over a billion dollars and countless appreciations, its cast is hopeful that it can be less the exception rather than the rule going forward — but they know that may take some time to become a true reality. “Everything doesn’t happen overnight,” Jordan said. “We crushed a lot of stereotypes in [‘Black Panther’] that really needed to be, and I think the industry really paid attention to that. The next wave of producers, actors, writers, directors, costume designers, sound mixers — there are so many departments that need better representation, and I think this film succeeded on so many different levels that it’s inspiring this new batch [of talent] that’s coming to play … when we look up 5, 10 years from now, I think we’ll such a much different landscape than we have right now.”

Beto O'Rourke set to sit down with Oprah next month