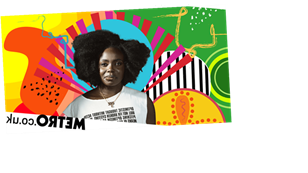 Welcome to Black Owned, a series that celebrates the brilliant Black entrepreneurs doing bits in the UK.

Despite challenges, the community continues to create important and brilliant work – and we’re here to make sure that you know about it.

As luck would have it, we’re kicking off on the inaugural Black Pound Day – a monthly celebration of Black business and financial empowerment.

We kick off the series with a true renaissance woman. Personal trainer Kelechi Okafor is the founder of dance school Kelechnekoff, the star of the Say Your Mind podcast (available on iTunes and Soundcloud), and creator of everyone’s favourite Karen, #SallyfromHR.

With so many strings to her bow, who better to kick off our celebration of Black business brilliance?

Hey Kelechi! Where did the idea for Kelechnekoff come from?

I set up Kelechnekoff in response to the fact that I wasn’t seeing women like myself represented within fitness. There was a story about my interaction with a pole studio in Manchester that went viral because it highlighted how Black women are regularly shunned within dance and fitness.

[Despite the fact that twerk is a dance form that can trace its origins back centuries to traditional dances in West Africa, the studio claimed that Kelechi’s style was ‘basic’ and that twerk was something that Miley Cyrus made popular.]

I knew that a studio of my own would help me to amplify the marginalised voices that are intentionally left out of mainstream representations of fitness and wellness.

What were you doing before you set up your business?

I have always danced and attended a performing arts school to study musical theatre.  Because dance came naturally to me, I hadn’t considered it as a career – I was solely focused on acting. In Britain, however, the roles for Black women in the acting industry aren’t plentiful so I had to consider what other skills I could utilise.

I decided to become a personal trainer (I’ve always been athletic, competing in the 200m sprint since high school) and was surprised by how easily things flowed from there.  I was able to use social media to draw attention to the disparities I noticed within the wellness industry, which led to all the things I’m doing now.

No! It seems to me that the very nature of the ‘ideal body’ is very white-focused. Even within body positivity movements, we find fewer Black activists being celebrated.

From yoga to weight lifting, the narrative that prevails is that Black people are an anomaly in those spaces. Because of that, they’re celebrated as being a niche rather than the norm on social media, etc.

Your studio is based in Peckham – a traditionally diverse area that is increasingly succumbing to gentrification. How is that having an impact on your business?

Gentrification is a funny one because the dynamic tries to swallow up marginalised communities while claiming to be in awe of the diversity in the areas that get taken over.

The studio has a mix of people attending classes and it is always important for me to assert that oppressive ways of interacting with those deemed as ‘other’ – which is normalised in other fitness spaces – will not be tolerated in mine.

I regularly write to the government to let them know of oversights that I identify as a Black small business owner. It is important that my voice is heard too because I have a closer proximity to those in the community that gentrification drowns out.

Has your identity made it harder to get your business off the ground?

Being a Black woman has definitely meant that I’ve faced challenges in setting up and making a success of my business. It also ties in with how vocal I am online about injustice; brands who would normally want to be affiliated with a pole dance fitness studio are cautious of me.

I guess some brands don’t want to address their anti-blackness if it’s not profitable.

Recognition has been one of the main challenges I’ve faced. Anyone who has been to the studio knows that what I am doing is rare and something worth celebrating. I know that my Blackness makes it difficult for mainstream brands to platform what I do because they’re generally not accustomed to promoting an alternative to the white aesthetic.

What about your interactions with clients?

Some people are genuinely shocked to find that as a Black pole dance studio owner, I refuse to acquiesce to the random whims of clients. I don’t believe in the customer always being right and I make that clear. To me, it’s an oppressive dynamic that is rooted in anti-Blackness to think that patrons of an establishment (who would historically be white) should always get their way with those serving them (usually Black).

The studio rules are made clear even before clients arrive and to me, it is an opportunity to teach people how I expect to be treated as a Black woman. Boundaries are important.

What advice do you have for other Black women who are thinking about setting up their own businesses?

I think that Black women should start businesses and truly make themselves seen everywhere. No matter how outlandish your business idea seems, it always seems wild until it’s not. There is a power in calling the shots and defining your own rules, and I want more Black women to have access to that.

Be clear on who your ideal client is and focus your ethos around them. Be open to tweaking things along the way and most importantly make time for joy and rest.

What do you wish you’d known about being an entrepreneur before you started on this journey?

I wish I had known how thin the line is between work and play! I have to actively avoid checking emails on the days I say I’m off otherwise that quick email will turn into five emails.

It is so important to not be entirely consumed by your work.