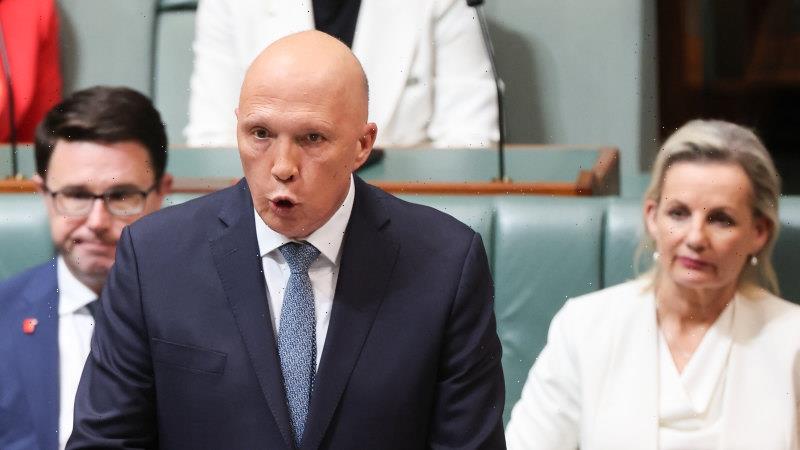 An opposition leader has a tricky task when delivering a first budget reply after an election rout. But circumstances played into the hands of Peter Dutton for his big parliamentary occasion on Thursday night.

Jim Chalmers’ budget was, as the treasurer argued, responsible and restrained. But it contained alarming numbers on the potent issue of surging power prices. They’re not Labor’s fault, and of course when it comes to energy policy the Coalition has dirty hands.

But dealing with the crisis, driven by the Ukraine war, is now Labor’s problem, and that gave Dutton something substantial to latch onto.

Aside from the budget, the government this week introduced its workplace reforms, which include extending multi-employer bargaining, and business is critical, fearing a rise in strike action. Industrial relations is traditional core ground for the Coalition (not that it has always gone well politically). The legislation provided some more fodder for Dutton.

In Thursday’s reply, Dutton sounded nervous and fluffed some lines. Without the troubles Labor faces, he probably would have struggled. In the event, it was a comprehensive effort that touched many bases. Chalmers had pre-billed his budget as “workmanlike”, and so was Dutton’s reply. Neither indulged in the “flashy”.

Homing in on the cost of living, Dutton told Australians: “Labor’s budget was a missed opportunity to help you at a time when you need help.” 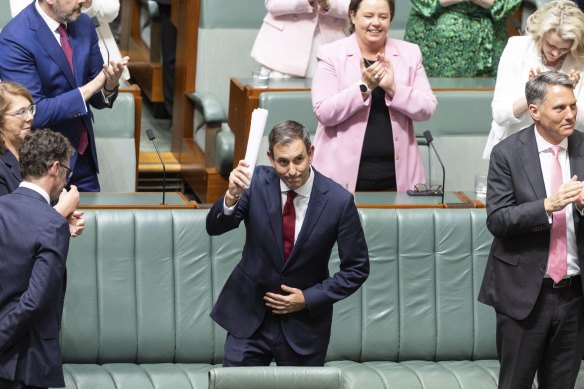 Notably, however, he did not say the government should have splashed cash around.

Dutton reprised Labor’s killer pre-election line: “On Tuesday, the treasurer failed to mention in his speech what Labor’s budget papers revealed: ‘Everything is going up, except your wages’.”

“Cost of living, power prices, taxes, interest rates, unemployment and the deficit are going up, or will be going up,” Dutton said, claiming that “by Christmas, a typical family will be $2000 worse off under this budget”.

The budget “makes life more difficult for millions of Australians,” he said; he invoked the familiar Coalition mantra that “Labor can’t manage the economy”.

It’s true that life will be more difficult for millions of Australians in coming months, with rising prices and interest rates. But it is not true, as Dutton claims, that this is because of the budget.

Despite the climate issue being a significant factor in the Coalition’s loss of teal and other seats, Dutton used the energy crisis to maintain a hard line.

“Labor’s push for 82 per cent renewables by 2030 comes without a plan to ensure reliable baseload power,” he said. “Labor is misleading Australians when it says it can roll out billions of dollars’ worth of transmission wires, cables and towers for renewable energy in the next few years.” Nuclear got a nod.

He said the budget saw the government “rip-up funding for gas exploration and cancel gas infrastructure projects which would eliminate shortfalls and make your bills cheaper. They handed over funding to environmental activists who want to overturn gas project approvals.

“Higher gas prices will be baked-in for the foreseeable future, putting high-paying jobs in regional communities at risk.”

The government retreated from its flirtation with recalibrating the stage three tax cuts, but Dutton painted this as just a temporary reprieve.

“Our legislated tax plan future-proofs your income,” he said. Labor had taken the Coalition’s tax plan to the election, “but now they are laying the groundwork to break this promise”.

“This budget provides no certainty for ten million Australians expecting tax relief in 2024. The budget is intended to soften up Australians. It gives the government time to come up with excuses by May next year to tax you more.” 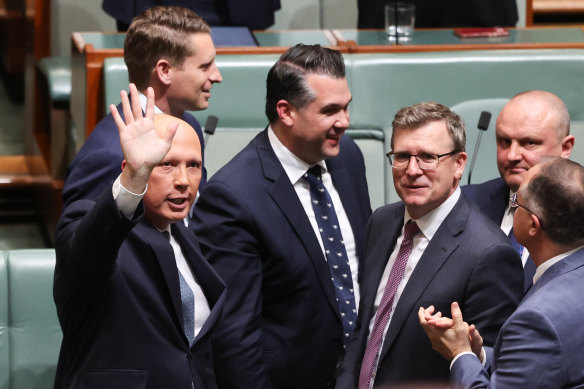 Unsurprisingly, the opposition leader didn’t announce major new Coalition policy, but he reaffirmed the election promise to allow first home buyers to dip into their superannuation to buy a home (which would be extended to women who separated later in life).

He contrasted this with the budget’s “housing accord” between governments, investors (Chalmers is thinking super funds) and industry to build a million houses. “They want your super to invest in someone else’s home – not your own.”

He cast the government’s multi-employer bargaining changes as a throwback to the 1980s, a world where “multiple sectors will be able to engage in crippling economy-wide strikes, where parties unaffected by disputes join in on protests”.

Dutton trod carefully in some areas, finding aspects of the budget with which to agree (the extension of the childcare subsidy, lower medicine prices), and promising co-operation on issues such as violence against women and children.

Elsewhere, notably on education, he was combative, saying “the system has allowed ideologically driven advocates too much influence over what is taught to our children”.

He also used the occasion to sketch his personal story, just as Anthony Albanese did so often in the run-up to the election. Albanese said he learned the value of a dollar growing up as the son of a single mum; Dutton told us his parents taught their kids “to appreciate the value of money”.

In the direct political contest – government versus opposition – Labor is in a very strong position. Post-election, the public is not expressing buyer regret. The opposition is painfully strung out on a spectrum stretching from its right wing to its moderates, with Dutton still to figure how he can shape his troops into a cohesive fighting unit.

But in that real world where families sit around those much-talked-about kitchen tables, the government knows it confronts intractable problems.

This week it has been criticised for not having sorted out a policy on power prices before the budget. One reason is because crafting one is fraught with difficulty. Nevertheless, the task looms more urgent by the day.

Wednesday’s unexpectedly high inflation number – 7.3 per cent for the September quarter – just reinforced how painful cost-of-living pressures are becoming. It also called into question the budget’s forecast that inflation will peak (in the December quarter) at 7.75 per cent, although Chalmers is sticking to it.

As if they don’t have enough bad news, households with mortgages will be slugged with another interest rate rise when the Reserve Bank board meets on Tuesday, Melbourne Cup day.

Labor was helped to office by the cost-of-living pressures and its promise it would get real wages growing.

But living costs are much more acute now, and the budget confirmed the earliest real wages are likely to start moving is 2024.

In the space of a few months the cost of living has transformed, politically, from a Labor weapon to a Coalition one. As it looks to the May budget, the government will be preoccupied with trying to deal with both the substance and the politics of the issue.