Russia’s ambassador to Australia has warned any move to expel him over the war in Ukraine would be swiftly followed by the removal of Australia’s top diplomat in Moscow, as he claims Australians have been “brainwashed” to take Ukraine’s side in the conflict.

Foreign Minister Penny Wong said during the United Nations General Assembly this month that the expulsion of Russian ambassador Alexey Pavlovsky was “under consideration” after Russian President Vladimir Putin stunned the world by announcing a partial military mobilisation and floated the use of nuclear weapons. 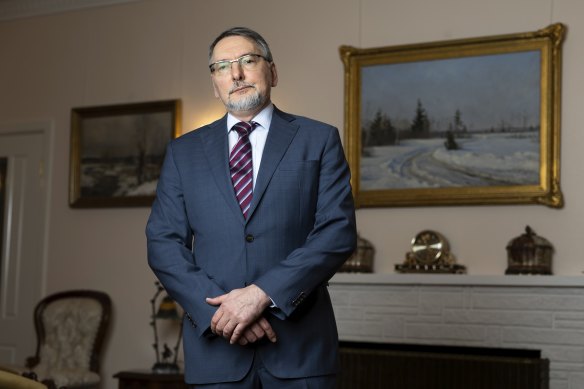 Having already announced sweeping sanctions on Russian individuals and businesses supporting the war effort, expelling the Russian ambassador is one of the few remaining levers available to the government to punish Russia over the invasion.

The Albanese government announced on Sunday it would impose further financial sanctions and travel bans on 28 Russian-appointed separatists, including individuals involved in legitimising what it calls “sham” annexation referendums in four Ukrainian regions.

The government also announced it had filed an intervention in the International Court of Justice supporting Ukraine’s claims Russia has violated the Convention on the Prevention and Punishment of the Crime of Genocide.

Pavlovsky told The Sydney Morning Herald and The Age retaining “a Russian embassy here, and an Australian embassy in Moscow, is not a concession to Russia”. 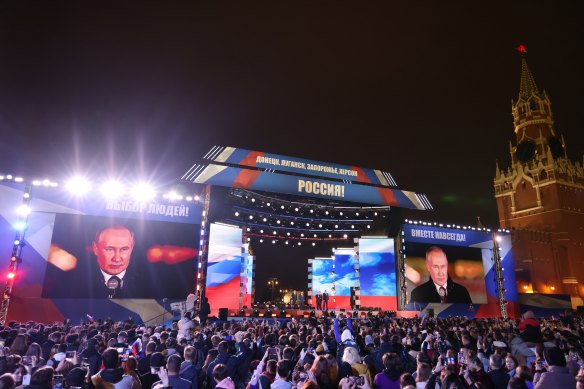 President Vladimir Putin speaks at a ceremony in Moscow marking the incorporation of four Ukrainian territories into Russia.Credit:AP

“It’s just an acknowledgement that despite very drastic differences between our countries we still need a dialogue and still can communicate,” he said in an interview at his Canberra residence.

Asked whether Moscow would retaliate by expelling Australia’s ambassador to Russia, career diplomat Graeme Meehan, if he was sent home, Pavlovsky said: “Retaliation is not the proper word. It’s just how it works … Reciprocity is a basic principle for interstate relations.”

Ultimately, Pavlovsky said that “it’s absolutely up to the Australian side to decide whether or not it needs to maintain communications through embassies with this or that state”.

Ukrainian ambassador Vasyl Myroshnychenko has said he would like to see the Albanese government “eliminate any presence” the Russian state has in Australia, including by expelling diplomats from Canberra.

Many countries supporting Ukraine’s war effort – including the United States and United Kingdom – have so far rejected calls to expel the Russian ambassadors from their capitals, preferring to keep some lines of diplomatic communication open.

Russian military doctrine since 2010 has stated that Russia may use nuclear weapons only in response to the use of nuclear weapons or other weapons of mass destruction by another state, or if the very existence of the Russian state is threatened by the use of conventional weapons.

Pavlovsky acknowledged the “predominant mood” in Australia was hostility towards Russia and the belief Ukraine had been the victim of bullying by a larger, more powerful neighbouring state.

But he said this was largely because the western media did not provide the public with the Russian perspective on the war or highlight wrongdoing by Ukraine, including restrictions on teaching the Russian language in Ukrainian schools.

“Australians are not informed on the genesis of the situation,” he said. “And frankly I would even use the word brainwashed.”

Even as nations such as Australia decry the annexation referendums as shams, Pavlovsky said he believed the “true mood” in those regions was widespread support to be part of Russia rather than Ukraine.

“So if somebody tells me that the numbers we have today of 97 per cent, 87 per cent [support] for joining Russia is a sham I will not believe it,” he said.

Putin has announced he considers the Luhansk, Donetsk, Kherson and Zaporizhzhia regions – comprising about 15 per cent of Ukrainian territory – to be part of Russia following last week’s referendums.

“This is not a small country on the other side of the world whose arguments are irrelevant or distinct from Australian interests.

“What is happening is nothing less than an assault on the liberal democratic values Australians uphold.”

NFL Betting Cheat Sheet: Why three is still the magic number in Week 4