The Chinese vessel is keeping an eye on the biennial Talisman Sabre war games involving Australia and the United States, which were officially opened for 2021 on Wednesday afternoon. 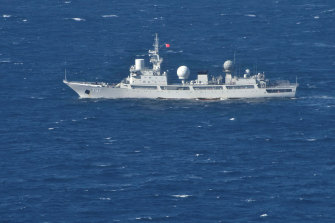 The Tianwangxing is sitting outside Australia’s territorial waters.Credit:Department of Defence

The Australian Defence Force has been monitoring the Chinese spy vessel, called the Tianwangxing, for a number of weeks. The auxiliary general intelligence ship, which is fitted with advanced communications systems, is sitting within Australia’s Exclusive Economic Zone but outside its territorial waters.

Similar Chinese ships sat off Australia’s coast and monitored the war games in 2017 and 2019.

Mr Morrison said the vessel was not in Australia’s territorial waters, but the government was still “very wary” of the Chinese ship’s presence.

“But they are in an area where they are allowed to be, and we know they are there and we are keeping a close eye on it.”

“They’re allowed to be there and the law says they can be there – the Law of the Sea – just like the law says we can be up in the South China Sea,” Mr Morrison said.

“And so we would just simply say that we think the same tolerances and the same appreciation of those international laws should apply.

“Of course we watch them. And they are watching us.”

Defence Minister Peter Dutton said the Australian government “fully expected” a ship of this nature to be arriving in the region during the joint exercises with the US and had “planned for its presence”.

“The presence of similar vessels did not detract from TS17 or TS19 and we are confident that it will not impede this year,” he said.

“Australia respects the right of all states to exercise freedom of navigation and overflight in international waters and airspace, just as we expect others to respect our right to do the same.”

Liberal MP Dave Sharma, a former senior diplomat, said the Chinese ship’s presence “does not strike me as the act of a friendly nation”.

A spokesperson for Defence said it was aware the ship was approaching Australia’s east coast via the Torres Strait.

“Australia monitors all vessels operating in our maritime approaches,” the spokesperson said.