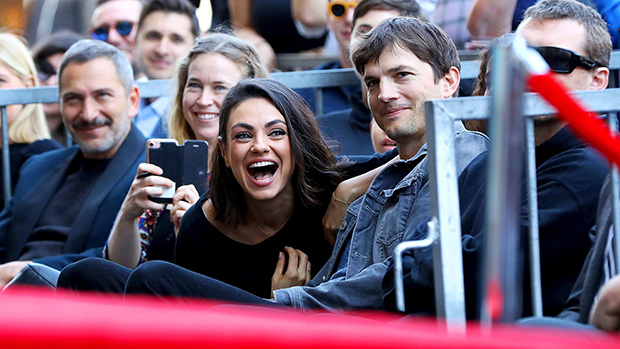 Mila Kunis and Ashton Kutcher have broken up — which was news to them! After seeing their love crumble on the cover of a magazine, the couple clapped back by squashing any and all rumors of ‘dark secrets’ and breakups.

“Babe, what’s happening? What’s going on?” a concerned looking Ashton Kutcher, 41, asked his wife, Mila Kunis, 35, in a June 19 Instagram video. Mila dropped a major bombshell, telling Ashton, “It’s over between us.” The Black Swan actress then held up her phone, showing a picture of a tabloid magazine cover with a picture of the That ‘70s Show sweethearts and the headline “IT’S OVER.” Ashton couldn’t believe his eyes or his ears. “It’s over between us? Oh my god! What are we going to do?”

“I felt suffocated,” Mila said, albeit nonchalantly. “You felt suffocated by me?” Ashton said with a shocked voice, before asking, “I was just so overbearing, wasn’t I?” Mila also relayed the news that she “took the kids” (daughter Wyatt, 4, and son Dimitri, 2) while revealing Ashton’s “very dark secret” was the cause of the breakup. As to what that “secret” was, Mila couldn’t say, as she didn’t read the magazine, but only had a picture of the cover. “I guess it’s over,” Ashton captioned this sarcastic video. “Maybe next week my wife will be having twins. For the third time. But who’s counting.”

Mila and Ashton’s video got some love from fellow celebs whose drama has been front page news on similar periodicals. “This is amazing,” Demi Lovato commented while adding a heart emoji, per Entertainment Tonight. “DAMNIT!!! I was gonna take a run at MK!!! I want a refund!” Ashton’s The Ranch co-star Dax Shepard wrote. Dax’s marriage to Kristen Bell has similarly ended five or seven times within the pages of certain magazines, so he would know how it feels to be the last person to find out about your “breakup.”

Ashton and Mila proved their love was still going strong when they went for a rock in Los Angeles in the middle of May. While taking a stroll, the two paused for Ashton to lean in and give Mila a sweet kiss. A week after this stroll, the two were once again spotted together. This time, Mila and Ashton looked so in love while flower shopping. Maybe his “dark secret” is that he told his wife that he didn’t like ranunculus flowers, but in truth, he loves Buttercups. Gasp!

Iran shoots down US drone: What we know about the tensions between the US and Iran