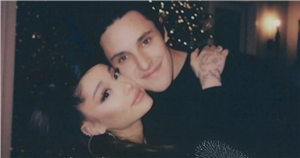 Congratulations are in order for newlywed Ariana Grande – especially now details of her "intimate" nuptials have emerged.

The superstar married real estate agent Dalton Gomez in a secret, back garden ceremony "surrounded by hundreds of white and light pink florals" in California at the weekend, according to reports.

Ariana and Dalton first got together in May 2020 and their whirlwind relationship went from strength to strength before they confirmed their engagement in December less than seven months later.

At the time of their engagement, Ariana shared a picture of her very unique engagement ring.

Dalton bought the star a ring with a oval-shaped diamond which is set diagonally onto a thin gold band, and it’s believed to have a hefty price tag.

How much did Ariana Grande’s engagement ring cost?

The experts explained: “Assuming the oval has high colour and clarity grades, it would be reasonable to assume Grande’s ring cost anywhere in the region of £110,000 to £250,000.”

You would not want to lose that ring down the sink!

What else should you know about Ariana Grande’s engagement ring?

As well as being pricey, it’s thought the ring also contains a family heirloom.

There’s speculation surrounding the pearl’s origin with some fans believing that the pearl was from a ring that her grandmother had made for her, featuring the pearl from her grandfather’s pin.

Taylor & Hart’s Design Director, Kate Earlam-Charnley, said it’s not unusual for engagement rings to have a family heirloom in.

“We saw this a couple of years ago with Harry & Meghan. Harry thoughtfully included two round diamonds from his mother’s personal collection as a way ‘to make sure that she’s with us on this crazy journey together’,” Kate explained.

She continued: “Repurposing heirloom jewellery or featuring materials once owned by loved ones in engagement rings adds sentiment to an already treasured item of jewellery.”

The stunning ring contains a whopping 12mm diamond and the oval shape of the gemstone is growing significantly in popularity.

According to sources in the US, Ariana and Dalton said their vows in an informal ceremony on the grounds of a £5 million home Ariana bought from chat show host Ellen DeGeneres in June last year.

The property is in the celebrity enclave Montecito, where Prince Harry and Meghan Markle live, as well as Katy Perry and Orlando Bloom.

Ariana and Dalton were wed surrounded by hundreds of white and light pink florals, according to reports.

One source said: "The couple always wanted an intimate ceremony. That was something that was important to both of them. They wanted it to be private and it was always on the cards for summertime."