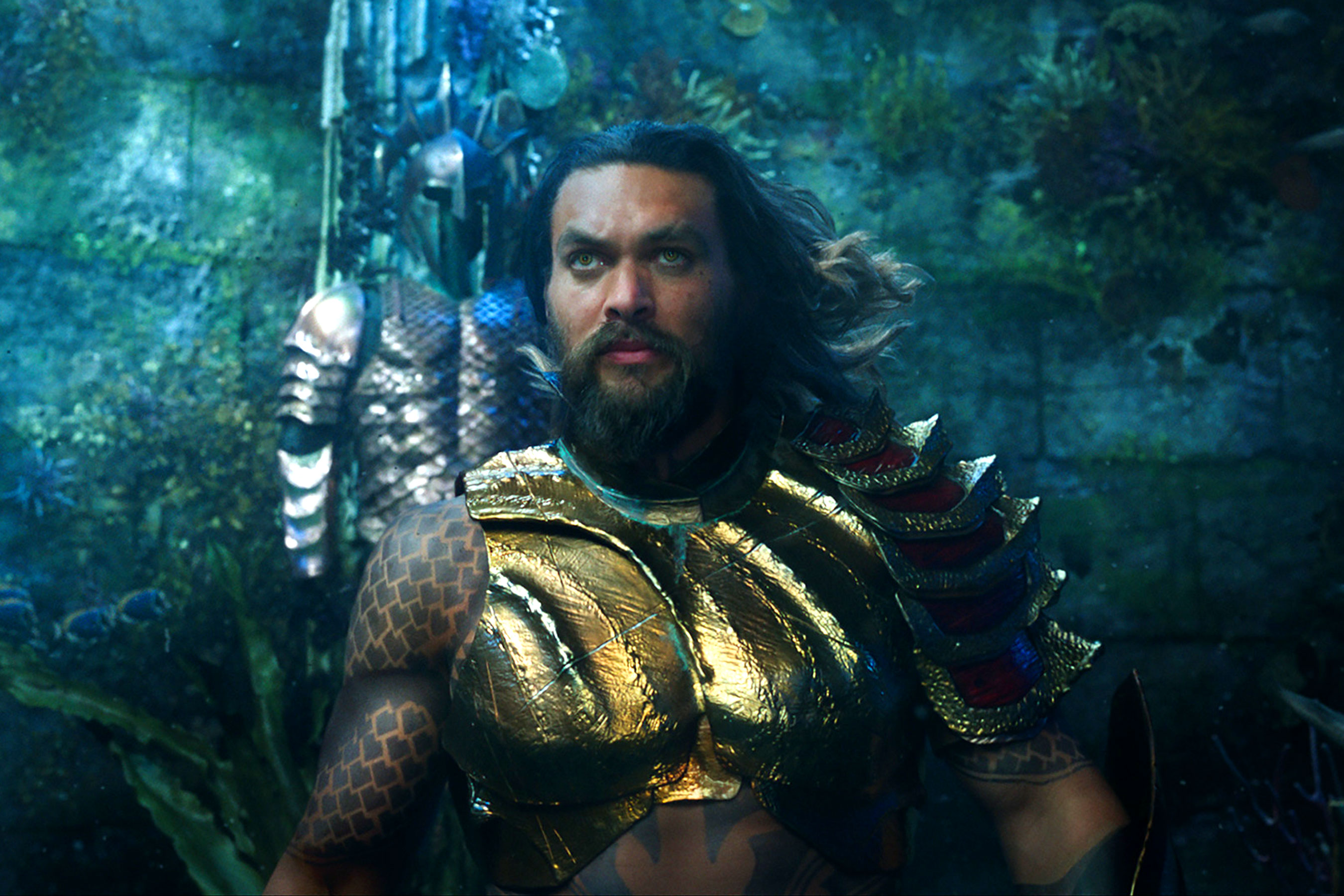 There’s a scene that comes early on in the goofy, tonally bizarre Aquaman where Jason Momoa’s half-Atlantean sea-hunk makes his first big entrance by boarding a Russian submarine that’s been hijacked by hi-tech pirates. He’s arrived to dispense his signature brand of fishy whoop-ass. The shirtless superhero leaps down through the top hatch, turns to the lead bad guy (who will later become “Manta”) and uncorks the one-liner: “Permission to come aboard.” Momoa delivers the cornball quip with a Dwayne Johnson-like smirk, then whips his long hair like he’s shooting an Axe Body Spray commercial as a thick heavy metal guitar riff is struck. I laughed, but I’m still not sure if I was meant to. That pretty much sums up every minute (and there a lot of them) in director James Wan’s new DC action-comedy folly. It can’t decide if it wants to be silly or serious — a superhero movie or a parody of one.

To be fair, there’s always been an inherent absurdity about Aquaman — telepathically communicating with fish isn’t exactly the most intimidating skill set, especially compared to his DC stablemates Batman and Superman. Even the writers of Entourage knew that much. But Momoa had enough badass swagger in 2017’s Justice League to make you curious as to what he would do with his own solo vehicle. Unfortunately, the bloated, waterlogged film is loaded with crummy CGI, cheesy costumes, and groaner dialogue delivered by actors who are too good to traffic in such nonsense (Nicole Kidman, Willem Dafoe, Patrick Wilson). The best that can be said about this epic misfire is that you get to see a pink-haired Dolph Lundgren riding a giant seahorse and an octopus playing the bongos.

The movie kicks off with a prologue showing us how Aquaman came to be. It’s right out of Ron Howard’s 1984 fish-out-of-water comedy Splash. Kidman, a wounded queen from the underwater kingdom of Atlantis, washes ashore in Maine, where she’s rescued by a lonely lighthouse keeper (Temuera Morrison) and nursed back to health. The interspecies couple consummates their forbidden love and soon a child is born. A child she has to abandon to return to the sea. The aqualad’s name is Arthur. And as he grows up into the chiseled, tattooed frame of Momoa, he will become the last best hope to unite the worlds of the deep and “the surface.” A series of training flashbacks between the teen Arthur and his Atlantean Mr. Miyagi (Dafoe) show him preparing for his warrior king fate.

Meanwhile, back below the depths, Kidman’s other son, King Orm (Wilson, whose hair goes from platinum blond to chestnut brown and back again), is scheming to wage war against the surface with the help of Manta, who has his own simmering grudge with Momoa’s Aquaman. But first King Orm has to unite the various tribes of Atlantis by visiting each and every one of them (the script says there’s seven, but it feels like a thousand) to engage in bare-knuckle realpolitik gamesmanship to get them to sign on to his nefarious power play. The movie toggles back and forth between dry land and the deep until an emissary from Atlantis — Amber Heard’s flame-haired Mera — arrives to convince Aquaman to jump in and take his rightful place as the first-born son and heir of Atlantis. The race is on. Can Aquaman retrieve the golden trident of King Atlan (a symbol of undersea might) before Wilson’s King Or assembles his fish and crustacean quorum?

Wan and writers Will Beall and David Leslie Johnson-McGoldrick seem to have raided every last dusty volume of Greek mythology to create their overly elaborate underwater pantheon of Gods and Kings. And the bottom-of-the-sea CGI confection city-states have a decent enough sort of visual grandeur with their soft, bioluminescent palette of pinks, blues, and greens. But it’s still pretty cheesy stuff. And Momoa seems torn between playing the material with a straight face or a Thor-like wink. The most excruciating moments come when Aquaman and Heard’s Mera head to the Sahara desert on a treasure hunt for the golden trident scored to a contempo R&B cover of Toto’s “Africa” — just in case you didn’t know where the Sahara Desert is. And their love-hate dialogue is just as painful. Here, judge for yourself. He: “Your ship has been marinating in chum butter. I don’t want to come out smelling like swamp butt.” She: “That’d be an improvement.” Ugh.

There was never a question that at this stage in Hollywood’s comic-book economy that every superhero would eventually get his or her own standalone blockbuster. Even Aquaman. But Wan, a director who’s proven himself to be a can’t-miss ace regardless of genre (from the horror formulas of The Conjuring and Insidious to the big-budget tentpole mayhem of Furious 7) seems to finally be out of his depth. He’s conjured an intriguing world, but populated that world with dramatic cotton candy and silly characters, including a hero who’s unsure if he wants to make us laugh or feel — and winds up doing neither. Pass the Dramamine. C-

Terrified of Killing Eve's Jodie Comer? You Won't Be After Reading These 12 Facts

Britain to be hit with SEVEN INCHES of snow, gales and -2C temperatures on Saturday
World News