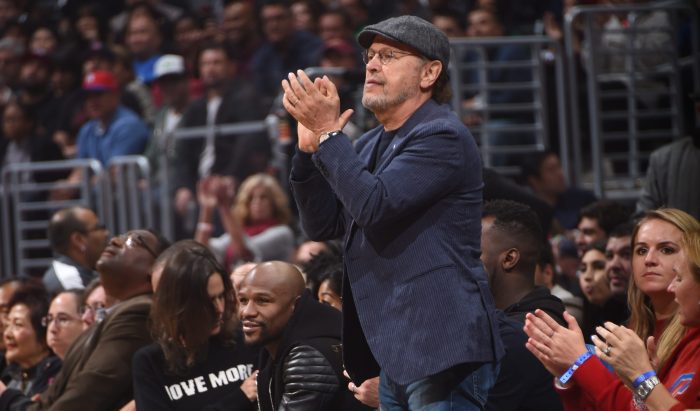 Billy Crystal has landed his next role, but he won’t need a script this time around.

The award-winning comedian and nine-time Oscar host has been tapped to serve as color commentator for the entire Jan. 31 game between the NBA’s Los Angeles Clippers and the team’s crosstown rival Lakers.

A diehard Clippers fan and courtside fixture at Staples Center since 1985, he will join Ralph Lawler during the legendary announcer’s final season on the air on Fox Sports Prime Ticket, the team’s pay-TV home.

The “Analyze This” star tells Variety that he approached the Clippers with the idea as a tribute to Lawler, whose 40 years as the voice of team he deemed “Hall of Fame worthy.” But Crystal also warned he may have trouble matching Lawler’s knack for trademark catchphrases.

“Mine are all in Yiddish, which may be difficult,” he joked to Variety.

Crystal isn’t a stranger to major league action — he had a one-day contract with the New York Yankees to celebrate his 60th birthday in 2008 — but says he’s “not totally ready” when it comes to announcing for his favorite team. He’s been preparing by taping himself offering commentary while watching games on TV. He plans to be funny, but doesn’t want to be a distraction to the action.

Crystal will be part of a rotation of guests that have worked opposite Lawler in the broadcast booth during a season in which the team has gone without a full-time color commentator. Other guests expected later in the season to join Lawler include current Nets analyst Mike Fratello (January 23) and former coach Hubie Brown (March 24).

The funnyman says although he still loves rooting for the underdog and admires the perseverance of Clipper Nation, he’s itching for a shot at a championship, especially after the team got close to glory during the Blake Griffin/DeAndre Jordan/Chris Paul “Lob City” era in the 2010s.

“With the Clippers, it’s always been, ‘Wait til next decade.’ I love the grit, I love the characters,” he says. “Sometimes that’s enough for me. But now it’s getting to the point where I really want to win it.”

It isn’t just the scrappy nature of the Clippers that have made him a diehard fan; it’s the family atmosphere, as he recalled in a memorable 2015 post-season game which Paul won with a last-second shot.

“We had gotten a little friendly, and for some reason, he came over to me and hugged me for a long time,” he recalls. “It was a really special moment.”

But for Crystal, the new gig is all about saluting Lawler.

“It’s going to be a real honor to sit with him and do this game,” he said. “And hopefully it goes well. Who knows? I may have a new career.”