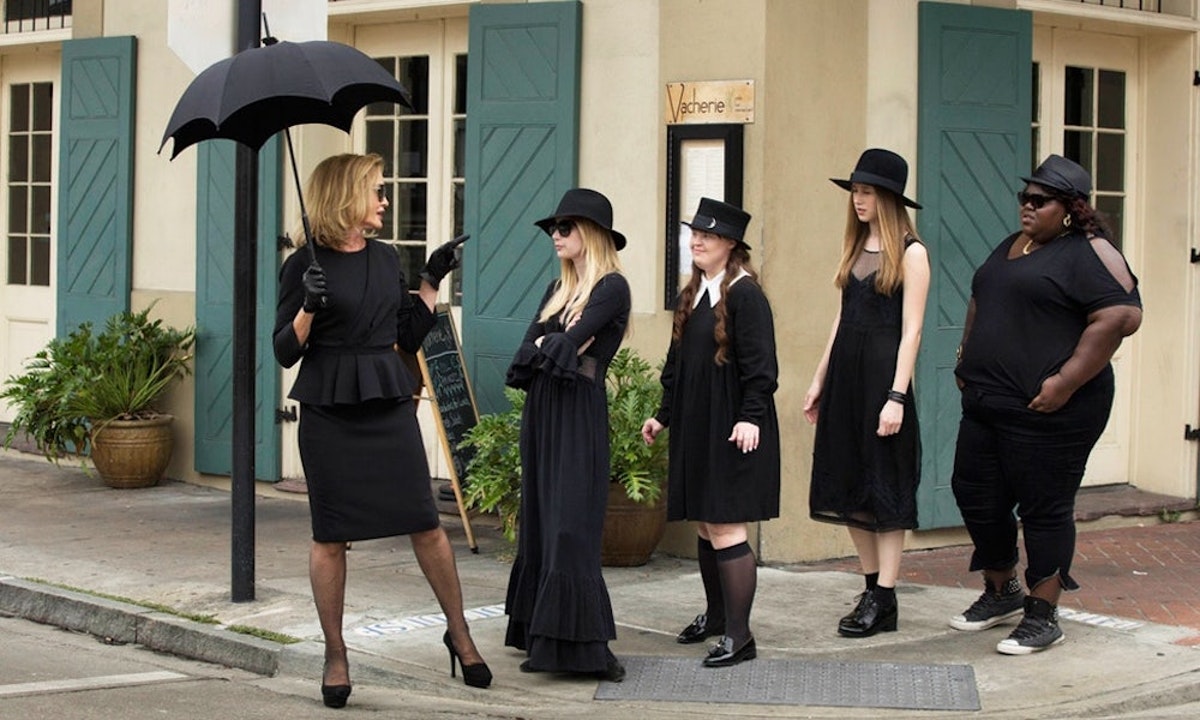 Each given season of American Horror Story is meant to serve as a standalone story. But Season 8 Apocalypse merged two of the show’s strongest seasons together for a Murder House (Season 1) and Coven (Season 3) crossover event that was nothing short of epic. But even though the season has come to a close, Ryan Murphy still has big plans for some of these beloved characters, specifically when it comes to the witches. According to Murphy, the Coven witches will be back for a future AHS season, which means it won’t be long until fans will be heading back to New Orleans.

"The witches will be back," Murphy told Entertainment Tonight, shortly after he was honored with a star on the Hollywood Walk of Fame on Tuesday. The witches he’s referring to are made up of Sarah Paulson’s Cordelia Goode, Emma Roberts’ Madison Montgomery, Taissa Farmiga’s Zoe Benson, Frances Conroy’s Myrtle Snow, Gabourey Sidibe’s Queenie, and Lily Rabe’s Misty Day, all of whom first appeared in the show’s third season of Coven.

It’s an exciting prospect, to say the least, given how easily all the actors seemed to fall back into their former roles, much to the delight of fans. However, if you were hoping this return would take place as early as Season 9, Murphy warns that his plans are a little further off than that. "Not next season," Murphy explained. "But we have something really fun planned."

Apocalypse ended on a somewhat hopeful note, though it was far from a happy ending. Mallory used her powers to go back in time and kill Michael Langdon before he could ever rise to power as the Antichrist, which meant everyone who had died by his hand in the former future was now alive and kicking. This included Zoe, Queenie, and Cordelia. But stopping one evil doesn’t mean that another can’t crop up in its place as a new potential Antichrist was born in Timothy and Emily’s son (hence why their DNA was so special to The Cooperative that earned them a place in Outpost 3).

So no, it didn’t wrap everything up in a neat bow (the series isn’t called American Happy Story, after all), but it did allow many members of the Coven to survive. Granted, it’s always possible the next season featuring the witches could take place in the past, thereby allowing even those who died for keeps a chance to return. However, even if it doesn’t take place in the Apocalypse aftermath, there will be still be plenty of witches to incorporate into the narrative.

Murphy didn’t go into anymore detail than that, nor did he specify how many future seasons need to come and go before he brings these Coven characters back, but that’s to be expected. The famed showrunner did tease, however, that he has an idea for the next season, and he said he plans on revealing the theme soon to his yet-to-be-announced cast. "I can’t say what it is! I’m going to this luncheon, and many of the Horror Story actors are there, and I’m gonna tell them for the first time," Murphy revealed during the same ET interview. "So I have to tell them first."

The mind reels at what new horrific creations are currently rattling around in Murphy’s mind, but just knowing that the Coven witches will eventually return makes the world a little bit brighter — even in the world of AHS.