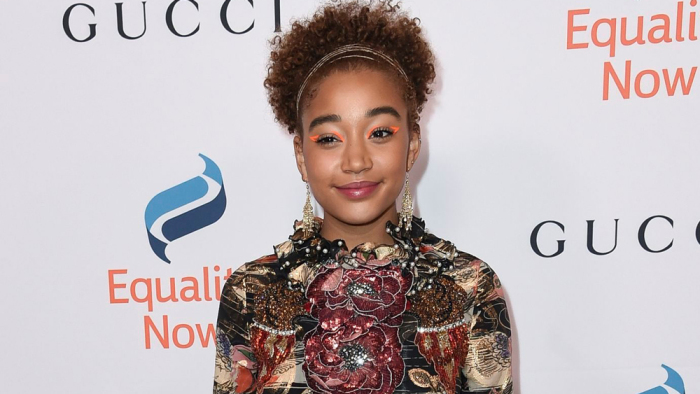 Amandla Stenberg is unleashing “rain and thunder” with her activism.

So said Tracee Ellis Ross on Monday while presenting the Change Maker Award to “The Hate U Give” star at Equality Now‘s Make Equality Reality Gala on Monday at the Beverly Hilton.

Tracee Ellis Ross presented “The Hate U Give” star Amandla Stenberg with Equality Now’s Changemaker Award, and recognized the “rain and thunder” the star has unleashed with her activism and voice.

“I’m starting to understand that the world is always going to politicize my actions because I came into the world the way that I am, which is black and a woman and gay,” she said. “There is going to be political weight in what I do. And I don’t necessarily have to place that weight on myself because sometimes that can be debilitating.”

She also praised actress Hari Nef, who remains true to herself, even as her actions are also politicized because she is transgender.

“At the end of the day the most powerful thing that you do is be you,” Stenberg said. “And if that happens to destroy olden constructs at the same time, I think that’s all the more powerful.”

In her speech, Atwood noted that Republicans in Ohio are proposing “mandatory motherhood,” which would criminalize miscarriages and make fertilized eggs persons under the law. She dryly remarked that this would “give rise to a whole new genre of murder mysteries.”

She also compared mandating pregnancy to the draft, which are both “requisition of your body,” but only one provides medical care, food, lodging, and clothing. “Enforced pregnancy is a form of slavery,” Atwood said. “It is time it’s recognized as such.”

Atwood, who is writing a sequel to her acclaimed novel, said Equality Now’s work perhaps one day “all girls may be able to grow up believing no avenues are closed, simply because they are girls.”

Warren Littlefield, an executive producer of Hulu’s adaptation of “The Handmaid’s Tale,” told Variety that the Trump administration is the biggest threat to women’s rights in the United States. “Handmaids” series creator Bruce Miller said there are “too many” events in the real world that outpaces the horrors in Atwood’s novel and the show.

“Everything on the show is something that’s happening in the real world. So we are in the unfortunate position of having to keep up very very deeply in the news,” Miller said. “There are so many terrible, cruel, and misogynistic things going on in the world at large that, it’s there too many to enumerate.”

In his introduction of Atwood at the gala, Miller reminisced about the author’s cameo in the show’s first episode, in which she slaps Elizabeth Moss’ character.

“Margaret just whacked Lizzie on the head so hard,” he said. “I’m reminded how lucky we are to have her to slap some sense into all of us when we need it, through her writing, through her voice.”

Who is Princess Latifa, how did she escape Dubai and who's her father?
World News