Home » Lifestyle » All The Spideys In ‘Spiderman: Into The Spider-Verse,’ From Peter Parker To An Actual Pig 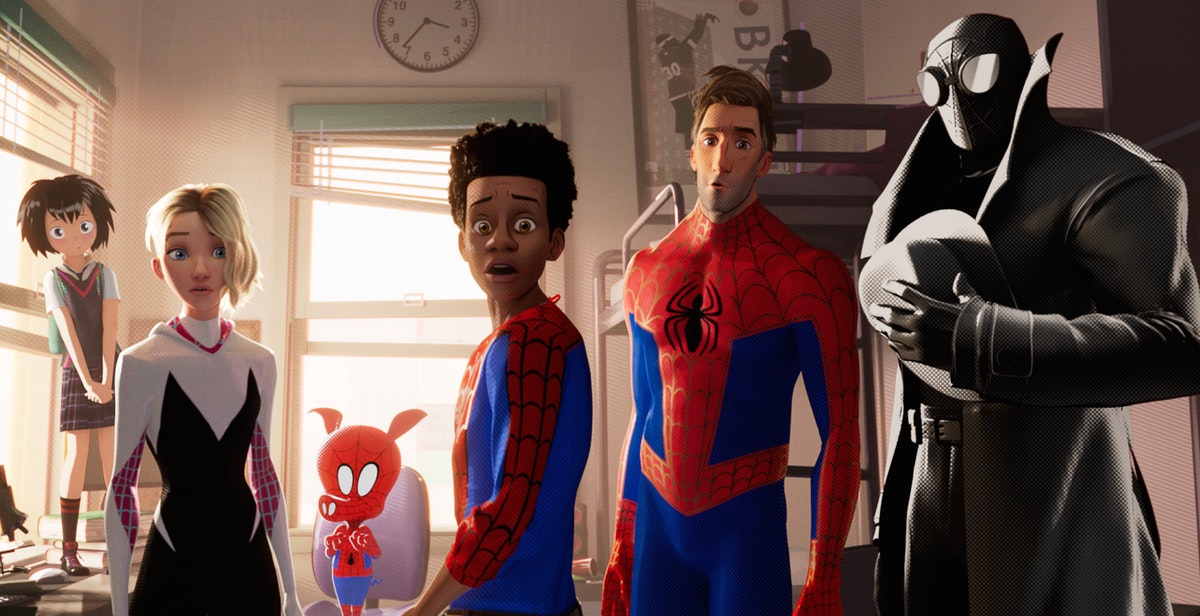 All The Spideys In ‘Spiderman: Into The Spider-Verse,’ From Peter Parker To An Actual Pig

Anyone who’s seen the trailers for Spider-Man: Into the Spider-Verse knows that this is a Spider-Man movie that is not just about a singular superhero. While the film focuses on Miles Morales (Shameik Moore), who becomes a new Spider-Man, all the Spideys in Spider-Verse contribute to the mission at hand. You just might not immediately recognize them (or even think they existed before this movie — looking at you, Spider-Ham) unless you’re a big comic book fan. So, here’s a rundown of all the Spider-People, whether you want to know what you’re getting into come Dec. 14 or have already seen the movie and are still a little confused.

Spider-Verse spoilers ahead. There are seven Spideys in Into the Spider-Verse: Miles Morales, Peter Parker (Chris Pine), Peter B. Parker (Jake Johnson), Spider-Man Noir (Nicolas Cage), Peni Parker (Kimiko Glenn), Spider-Gwen (Hailee Steinfeld), and Spider-Ham (John Mulaney). (There’s also, very briefly, another surprise Spider-Person in the post-credits scene.) The Spider-People all come together after the villain of this film, Kingpin (Wilson Fisk), tries to access other dimensions, causing Spider-Men of different realities to all exist in the reality of Miles Morales and his dimension’s Peter Parker.

The two Spider-Men that are the most confusing to separate are Peter Parker, a 26-year-old Spider-Man, who exists in Miles’ world and dies early on in the movie, and Peter B. Parker, a Spider-Man in his late-30s from an alternate reality, who becomes Miles’ friend and mentor.

There have been many, many versions of Spider-Man over the past five decades. IGN explained, "In many cases, these alternate Spider-Men aren’t so terribly different from the original. On some worlds, Peter Parker stayed married and had a child. In others he might be a gun-toting vigilante or still a teenager learning the ropes of the superhero game. And on still others, it wasn’t Peter Parker who was bit by the radioactive spider at all, but someone else." This is what the Spider-Verse is based around, and the younger and older versions of the "classic" Spider-Man in the movie are meant to represent just two Peter Parkers who were bitten by spiders.

In particular, when the younger one is introduced there are references to the Spider-Man movies staring Tobey Maguire (including that dancing down the street and pointing finger guns scene from Spider-Man 3). According to Nerdist, in the comics, this 20-something Spider-Man would have existed in the Ultimate Comics universe, since he is part of Miles Morales’ world and that is where Miles originated. As for the older Spider-Man, he’s a more jaded one. He’s been in the game for a while, his marriage to Mary Jane Watson has hit a rough patch, and he’s made some poor financial decisions.

It’s in this state that the elder Spider-Man meets Miles, who has only recently been bitten by his own spider and met — and taken over for — the Peter Parker of his world. Miles is a young kid from Brooklyn, who is excited to become Spider-Man, but has no idea what he’s doing just yet. In the comics, Miles was introduced in 2011.

The remaining Spideys all also existed in the comics. There’s Spider-Gwen, a version of Peter Parker’s love interest, Gwen Stacy, who got powers instead of him in her world. Spider-Man Noir is a Spider-Man who’s active during the 1930s. Naturally, this one wears all black, including a trench coat. Peni Parker controls a robot with Spider-Man-like powers that was created by her father, who died while he was operating the machine himself. According to Polygon, she was introduced in the 2014 comic miniseries Edge of the Spider-Verse, which also featured all the other Spideys in Into the Spider-Verse, although it was not their initial introduction like it was hers. Lastly, we have Spider-Ham aka Peter Porker, a spider who was bitten by a radioactive pig. And he really did have his own comic, starting with his introduction in the 1980s, according to Nerdist.

Now, this is only scratching the surface of these characters’ history. The Marvel universe runs incredibly deep, so if you’re really looking to find out more and end up in an endless Wiki hole, the Marvel Wikia is ready for you and any further questions you may have. Enjoy exploring those multiple realities.

‘We drank mine water’: Survivors detail ‘life-changing experience’ trapped in mine