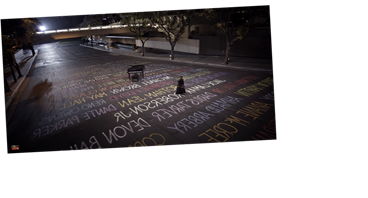 The annual BET Awards were held Sunday night, and they featured a ton of stars who came together virtually. One of them was Alicia Keys, who did her first live performance of her new single “Perfect Way to Die,” a song that honors Black victims of police brutality.

While Alicia performed the song, large murals featuring images of victims were showcased on buildings behind her. And, at the end of the song, the camera pans out from Alicia as she kneels over names of victims that are written in chalk on the ground below her.

Alicia opened up on Instagram earlier this month about writing the song. “The song title is so powerful and heartbreaking because WE are heartbroken by so many who have died unjustly,” she wrote. “Of course, there is NO perfect way to die. That phrase doesn’t even make sense. Just like it doesn’t make sense that there are so many innocent lives that should not have been taken from us due to the destructive culture of police violence.⁣ Sometimes I don’t have the words and music is the only thing that can speak.⁣⁣ I hope this speaks to you.⁣⁣ I hope one day this song won’t be so relevant. Let’s NEVER stop fighting for justice.”

While you’re probably familiar by now with the heartbreaking stories of Sandra Bland, Breonna Taylor, and George Floyd—all of whom are featured in the music video—there are many, many other names written around Alicia at the end. It’s not easy to make out all of them, but the point is made: Too many Black Americans have died as a result of police brutality and racism, and their lives are just as important as those who have died more recently and made headlines.

Watch the full music video for “Perfect Way to Die”:

Here are just a few of the many people Alicia honored in her new song:

Jones was a 7-year-old girl who was killed in her sleep during a police raid on her home in Detroit. Police conducted a SWAT-style operation designed to arrest her uncle, who lived in an apartment upstairs from where she was sleeping, The Guardian reported. A flash-bang grenade was fired, and officer Joseph Weekley shot Jones in the head.

McBride was a 19-year-old Black woman who crashed her car while intoxicated at a street in Detroit. She knocked on the door of a house and was shot and killed by homeowner Theodore Wafer. He said he shot McBride because he feared for his life when he heard loud banging on his door very early in the morning, per NBC News.

Gaines was killed during a standoff with police in her home after a traffic violation, per The Baltimore Sun. Portions of the standoff were filmed by Gaines and shared on social media, showing her loading a shotgun and telling the police officers outside that she was attempting to protect her son and that they had no right to break into her home. Police came to her home to serve her a warrant, and she was killed during a subsequent standoff.

In 2017, Owens held a 1-year-old boy and 4-year-old girl hostage with a butcher knife in a home where he was staying. He was killed in a standoff as mental health professionals were making their way to the scene, The Baltimore Sun reported. Body cameras clearly captured the officer in charge telling his colleagues to walk inside and shoot Owens.

Parker died in police custody in 2014 after he was tasered. The father of five was suspected of trying to break into a home when he was shocked with a taser, NBC 4 reported. He later died at a hospital.

Roberson was shot dead in his home by police after his fiancé called 911 for help when he overdosed on medication for his diabetes, the Daily Mail reported.

Tarver suffered what an attorney for his family called a “mental health crisis” after sustaining a traumatic brain injury in a car accident, according to CBS DFW 11. Tarver’s roommate called for help one night, and police fatally shot him in the stairwell of his apartment when he approached them with a frying pan and knife.

Arbery was an unarmed 25-year-old Black man who was shot and killed by two white men, Gregory McMichael and his son Travis McMichael, in Georgia in February while he was out jogging, The New York Times reported. Authorities later said it seemed like he was pursued and gunned down by three men in car.

The 19 Coolest and Comfiest Jeans Money Can Buy