Home » Lifestyle » Adele transformation: Inside the singer’s amazing fitness overhaul as she turns 32 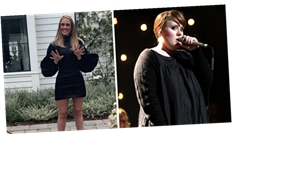 Adele transformation: Inside the singer’s amazing fitness overhaul as she turns 32

Yesterday, 5 May, was Adele's birthday and she posted a snap of herself looking stunning, healthy and svelte in a tight black dress. Its been over a decade since she released her album 21, and a lot has changed. The 32 year old now has the world in the palm of her hand even when she is not holding a microphone, leaping from strength to strength in a blaze of awards and hit songs.

Her personal life too has burned bright with the birth of her son Angelo in 2012 and her subsequent marriage to Simon Konecki in 2016, whom she split from last year.

However, through all this professional and personal life transformations the star has undergone a physical one too. She has been candid about how she has done this over the years; what bad habits she has dropped and which good ones she has taken on to improve her health.

In 2015 the star was asked in an interview with Rolling Stone magazine about her diet and she said that although she was cutting back on sugar and carbohydrates in preparation for going on tour she would “never deprive” herself.

She also explained that she chose to exercise to “get in shape for myself, but not to be a size zero or anything like that."

In regards to her exercise regime she said “I mainly moan”

"I’m not, like, skipping to the f**king gym. I don’t enjoy it. I do like doing weights. I don’t like looking in the mirror," she quipped.

"Blood vessels burst on my face really easily, so I’m so conscious when I’m lifting weights not to let them burst in my face. And if I don’t tour, you’ll catch me back down at the Chinese [restaurant]!"

The next year, Adele posed for Vogue and in conversation with the magazine proceeded to share her diet and workout routines that she claimed were working. She also revealed that she was ceasing from eating certain foods and drinks, and had given up smoking in order to protect her voice.

"I was trying to get some stamina for my tour, so I lost a bit of weight," she said before bemoaning her shopping habit. "Now I fit into normal, off-the-shelf clothes — which is really a big problem for me!"

Adele also worked out while on tour and and even shared a humorous photo to Instagram of herself lifting weights while in Toronto, Canada.

Last May Adele further proved that self improvement was still her end goal, sharing a photo of herself on her birthday surrounded by mirrors. She captioned it: “"This is 31…thank f**king god 30 tried me so hard but I’m owning it and trying my hardest to lean in to it all.

“No matter how long we’re here for life is constant and complicated at times. I’ve changed drastically in the last couple years and I’m still changing and that’s OK. 31 is going to be a big ol’ year and I’m going to spend it all on myself.”

An insider told People magazine that Adele was working out a lot doing pilates and personal training classes. They said: “After Adele started working out, she never looked back. She was instantly a changed person with a different mindset.

“At first, she was very hesitant about keeping a workout routine. It was like she was questioning if she was gonna enjoy it enough to stick with it. But she has been incredibly dedicated. She continues to work out with a trainer. And she looks fantastic.”

And it seems to be going to plan as back in October she shared a photo of herself at Canadian singer Drake’s 33rd birthday, looking svelte in a figure-hugging velvet dress. She captioned it: “I used to cry but now I sweat”.

But now the recent image of Adele looking stunning and healthy on her birthday shows that she has stuck to her regime. Go Adele, happy birthday!