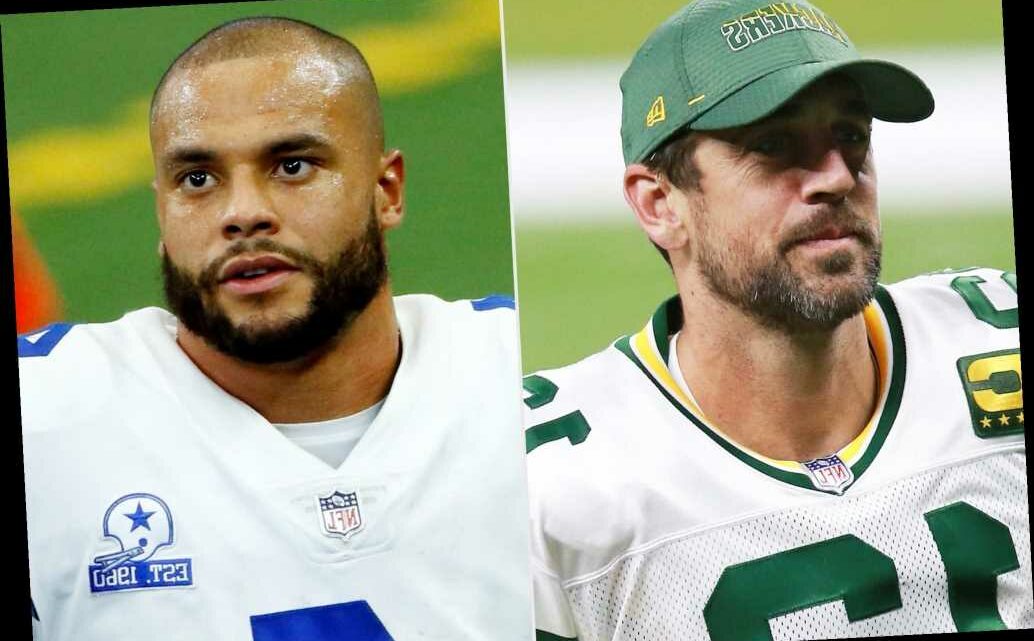 Aaron Rodgers Applauds Dak Prescott for Opening Up About Mental Health: It's 'Phenomenal' Dallas Cowboys quarterback Dak Prescott is earning the praise of his rivals after emotionally revealing his struggles with depression following a family tragedy.

Earlier this month, the 27-year-old NFL star publicly announced he recently has experienced anxiety and depression, which was worsened by the start of the coronavirus pandemic and his brother's death by suicide in April.

While Prescott was applauded by many for his candidness, he was also criticized by Fox Sports commentator Skip Bayless, who said the admission was a sign of "weakness." Bayless later said his comments were "misconstrued."

When asked about Prescott speaking out about his mental health, Green Bay Packers quarterback Aaron Rodgers called the moment "phenomenal" in a call with reporters last week.

"I think it’s great, I saw what Dak said and I applaud him," Rodgers said, according to The Athletic. "I think it’s phenomenal, him speaking out because that’s true courage and that’s true strength. It’s not a weakness at all."

Rodgers went on to say that by opening up about his experiences, Prescott made himself more relatable to NFL fans who may be going through a similar situation. "That we have the same struggles and the same issues, and the same desires to grow and change and see things in a better, positive light that so many people out there do," he told The Athletic.

"I think the more that we can connect with people, especially with conversations like this, the better our society can be moving forward as a connected society built around love and positivity," Rodgers continued.

Prescott — along with his brother, Tad Prescott — spoke about the death of their older brother, Jace, in an interview with In Depth with Graham Bensinger, published on Sept. 9. The brothers said Jace had a difficult time being the primary caregiver for their mother, Peggy Prescott, who died of colon cancer.

Following Bayless' criticism, Prescott said he would be doing a disservice to his teammates if he wasn't open about his mental health.

"I think being a leader is about being genuine and being real," he said. "If I wouldn't have talked about those things to the people I did I wouldn't realize that I, my friends and a lot more people go through them, and they are as common as they are. I don't think for one-second leaders are not, and no matter how big of a person you are, if you're not mentally healthy. … If you're not thinking the right way then you're not going to be able to lead people the right way."

"So, before I can lead, I got to make sure my mind's in the right place to do that, and lead people to where they want to me," Prescott continued. "I think it's important to be vulnerable, to be genuine, to be transparent. I think that goes a long way when you're a leader and when your voice is being heard by so many, and you can inspire."

If you or someone you know is considering suicide, please contact the National Suicide Prevention Lifeline at 1-800-273-TALK (8255), text "STRENGTH" to the Crisis Text Line at 741-741 or go to suicidepreventionlifeline.org

Who Is Basil Eidenbenz? ‘The Witcher’s Eskel Is A New Addition