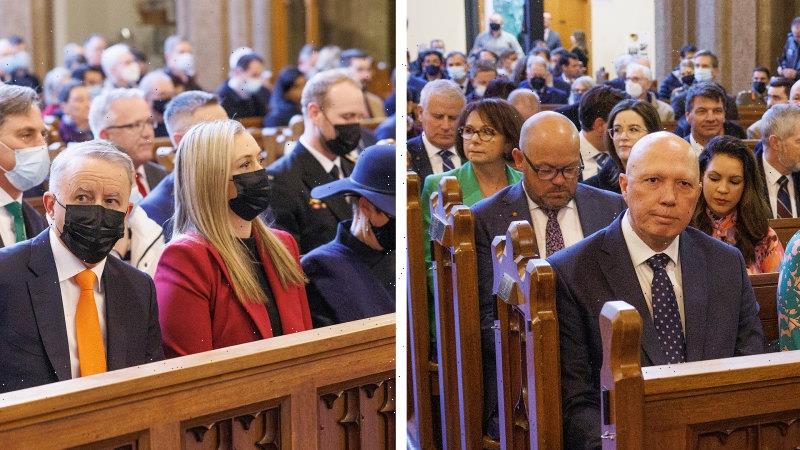 A new parliament, a new government and a new political divide: masks

Cannon roared, ceremonial and artillery smoke drifted, political combatants shook hands across a church aisle, the governor-general rolled up in a Rolls-Royce and face masks emerged as the new political divide.

The 47th Australian parliament opened with much circumstance to a new Labor government – only the eighth time government has changed hands since World War II – and a composition of MPs unlike any before. 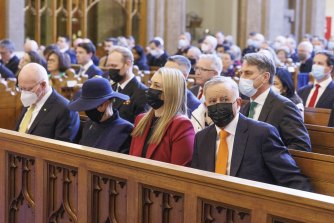 Prime Minister Anthony Albanese and his partner Jodie Haydon during an ecumenical service at St Andrew’s Presbyterian Church to mark the start of the 47th parliament.Credit:Alex Ellinghausen

A peculiarly pandemic-era approach to distinguishing the political victors from the vanquished revealed itself as the ranks of parliamentarians assembled.

While all MPs in the new government of Labor Prime Minister Anthony Albanese, plus all teals and Greens, wore face masks, almost all Liberal and Nationals MPs were bare-faced – first in the pews at the ecumenical service at St Andrew’s Presbyterian Church and then on the opposition benches.

It seemed a curious departure from mainstream health advice on a day when Australia recorded the highest number of COVID-19 hospitalisations – 5433 – since the pandemic began. 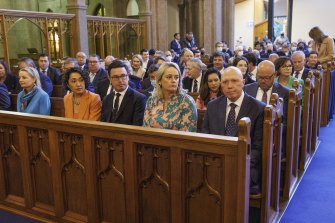 Opposition Leader Peter Dutton and his wife Kirilly during the ecumenical service.Credit:Alex Ellinghausen

Indeed, the Usher of the Black Rod and the Serjeant-at-Arms before parliament convened had stressed that face masks were “strongly encouraged within Parliament House where physical distancing is not possible”.

Still, the new Opposition Leader, Peter Dutton, was among the handful from his side of politics to don a mask.

His predecessor, Scott Morrison, didn’t turn up. He was away in Tokyo, where he is due to speak on Thursday at a “global opinion leaders’ summit” alongside former conservative leaders from the UK, Canada and Ukraine. 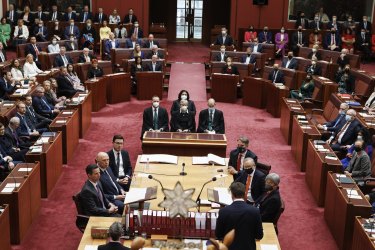 Cheers came from the public gallery as the representatives of a previously unheralded force, the “teal independents”, their victorious colours an amalgam of conservative blue and environmental green, were sworn in.

Greens leader Adam Bandt, leading a record four MPs in the lower house and 12 in the Senate, urged the new Speaker to broaden the traditional nod to the right (the government) and to the left (the opposition), and to extend his gaze straight ahead to where the significant gathering of crossbenchers now sit.

A new Speaker of the House of Representatives, Labor Queenslander Milton Dick, was elected to keep the place in order. Those with memories recalled him being booted out in 2018 for carrying an armful of muppets into the chamber. 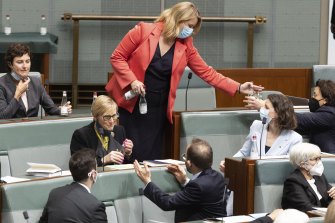 Greens leader Adam Bandt speaks with crossbench MP Zoe Daniel after the administration of the oath or affirmation of allegiance to members in the House of Representatives. Credit:Alex Ellinghausen

In the Labor way, the two new jobs were the result of factional dealing: Dick is from the Right, Lines is of the Left.

In the Westminster way, Dick was “dragged reluctantly” to the Speaker’s chair – a piece of theatre dating from harsher times when Speakers could lose their heads if their decisions displeased a monarch.

Any Speaker reluctance these days is eased by pleasant perks such as a magnificent office with vast dining room, courtyard, and a salary of around $370,000.

The House, however, is the place of the people, and by tradition is off limits to the monarch and in Australia’s case, her vice-regal representative, Governor-General David Hurley.

Thus, when it came time for Hurley to read the government’s agenda, he first ordered – as always – the Usher of the Black Rod to march from Senate to House, to bang on the people’s door with the rod and to summon the members of the House of Representatives to amble across to the Senate. 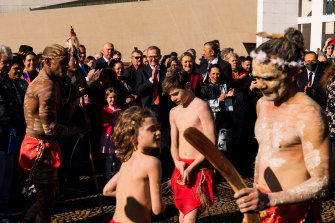 The Welcome to Country was attended by nine Indigenous MPs and senators.Credit:James Brickwood

High on the agenda recited by Hurley was Labor’s promise to hold a referendum seeking to insert into the Constitution an Indigenous Voice to Parliament.

It was a reminder of further diversity within the parliament, which has never had so many Indigenous people within its walls.

Indeed, nine Indigenous MPs and senators had attended during the morning a smoking ceremony on the parliamentary forecourt. 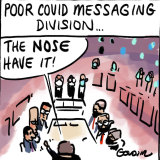 Finally, with the afternoon advancing, Hurley was done, his Rolls-Royce awaiting, and he formally declared the 47th parliament open.

Outside, military teams set booming a 19-gun artillery salute, the sound bouncing and echoing across the city of Canberra.

The day had begun with a post-dawn ecumenical church service, where Albanese and Dutton reached across the aisle to shake hands.

Now, however, politics was about to resume. 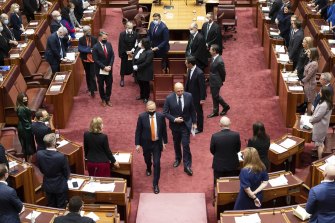 The divide across the political aisle, you might be sure, will reveal itself as a lot deeper than the business of wearing a mask or not.