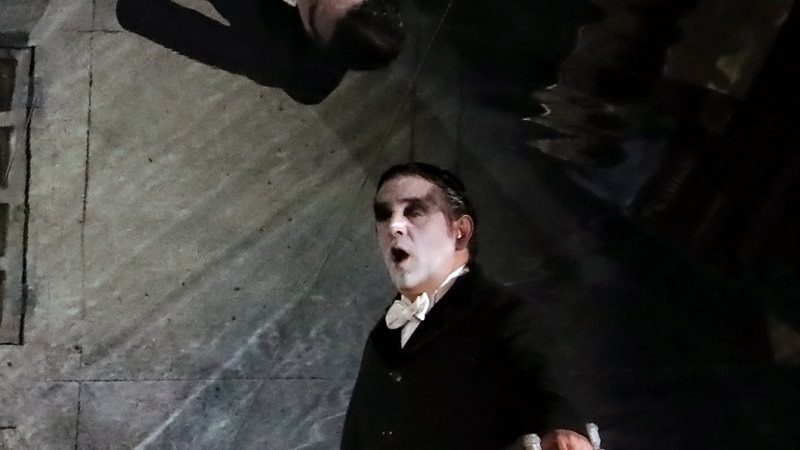 A depressing reflection on happiness

Director Greg Eldridge and Designer Emma Kingsbury’s production of Aribert Reimann’s opera The Ghost Sonata (after the eponymous play by Strindberg), is dominated by a large cantilevered mirror, cleverly angled so action on the floor is reflected back to the audience as a back wall, with trapdoors opening as windows and writhing dancers apparently defying gravity.

Given Strindberg’s depressing view of the prospects for happiness in middle-class family life, it could be taken as one of those none-too-subtle gestures of modernism – “this story is about you sleepwalking through your comfortable life of denial and hypocrisy”. On the other hand it could just be taken as an ingenious way of creating striking visual compositions amid the workaday clutter of Opera Australia’s scenery workshop. In the latter capacity, it worked brilliantly, giving this singular and powerful work a distinctive savour. 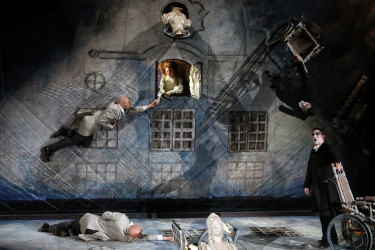 The central character is a student, freshly arrived from a night of rescue and heroism in a building disaster, into a glamorous apartment where he is drawn into a world of wealth so compromised by deceit that meaningful communication has all but ceased.

As the student, tenor Shanul Sharma, delivers the angular atonal energy of Reimann’s vocal line with resplendent clarity, precision and beauty of sound even when the melodic shapes are so sharp-cornered to almost to seem self-parodies. Richard Anderson, as the Old Man who tries to entrap him in a web of complicity, sings with a voice of fierceness and power coloured with complexity, embodying the character’s ingratiating guile and dark fears.

His nemesis, Alexandra Graham as the silent milkmaid stalks him with demonic convulsiveness. Dominica Matthews as The Mummy, who has ostensibly gone mad but finds truth at the climactic moment, creates a wild variety of sounds, indomitable as an avenging angel and with a particular if hitherto unsuspected talent for bird imitations.

As the Colonel, John Longmuir’s part was shadowed by fractured parodies of militarism on the trumpet which he matches with solid vocal fortitude which fades to silence as the character crumbles. As the Young Woman, Danita Weatherstone has a radiant moment of efflorescence and gleaming vocal colour in her aria just before the close.

Ruth Strutt is fearsome as the strident cook who macerates and pummels away all goodness while Virgilio Marino and Alexander Hargraves sketch a pair of resentful servant roles with finely hued edge.

Conductor Warwick Stengards led Riemann’s superbly crafted, brittle discordant score with sensitive finesse, drawing out its layers of textural clashes as though cutting sheet metal, while the players in the chamber ensemble created haunting instrumental colours as though heard in a psychotic dream.

This is a work whose early twentieth century stereotypes of bourgeois dysfunctionality and modernist gloom could have become dated, but which is given enduring relevance and force in this production.

The Movers List: How Tanayah Sam is using cricket to help others learn from his mistakes
World News