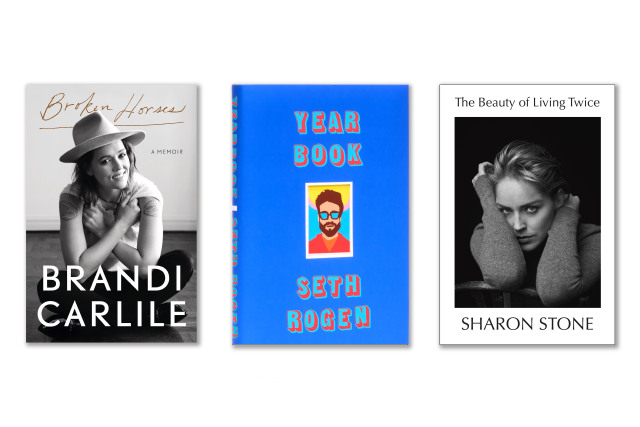 6 Celebrity Memoirs to Read This Spring

“Sharon Stone: The Beauty of Living Twice” by Sharon Stone, March 30
Actress and humanitarian Sharon Stone — she of “Basic Instinct” and “Casino” fame — recounts her process of healing, often with dark humor, in her new memoir “The Beauty of Living Twice.” But rather than focus solely on her film career, the nonlinear book offers a portrait of survival amid adversity; including, for Stone, childhood trauma, the toxicity of the film industry and challenges of celebrity, and the devastating stroke that altered her career in the early 2000s.

“Broken Horses” by Brandi Carlile, April 6
The singer-songwriter recounts her path to 11 Grammy nominations and the release of six studio albums. Carlile shares her journey with readers, from the early days of her career — performing in a local singing competition and opening for Dave Matthews Band — to the collaborations and accolades that have defined her nearly two decade career. Carlile also gets personal, opening up about raising two children with her wife Catherine Shepherd. The book is described as “an examination of faith through the eyes of a person rejected by the church’s basic tenets and a meditation on the moments and lyrics that have shaped the life of a creative mind.”

“Mutha: Stuff and Things” by Vincent D’Onofrio, April 20
Vincent D’Onofrio’s book isn’t a traditional read: it veers art installation, with short bits of writing and sentiments from the actor alongside photography by Carin van der Donk. (Tagline: “This book wasn’t written it was spewed.”) “Mutha” also features a forward penned by fellow actor-scribe Ethan Hawke (who, it’s worth noting, recently released a new novel of his own.)

“Sunshine Girl: An Unexpected Life” by Julianna Margulies, May 4
While Margulies made her name on iconic shows like “ER” and “The Good Wife,” the actress’ memoir is titled for her childhood nickname. “Sunshine Girl” is at its core a coming-of-age story, focusing on the experiences that preceded fame. In the book, Margulies recounts her tumultuous upbringing, as the child of divorced parents living on different continents, early career rejections and a toxic relationship. There’s a sunny ending ahead: Margulies meets her husband and becomes a mother.

“Yearbook” by Seth Rogen, May 11
Funnyman Seth Rogen penned a collection of personal essays for “Yearbook,” which draws comedy from the actor’s earlier years: bar mitzvahs, Jewish summer camps and adventures living in L.A. as a young aspiring comedian. His mother, Sandy Rogen, offers high praise in her blurb for the book: “Overall, I think it’s more sweet and funny than anything, so I like it, and I’m glad he wrote it.”

More From the Eye:

Ten of the Year’s Most Anticipated Book-to-Screen Adaptations

Bevy Smith Is Finally Exactly Where She Wants to Be