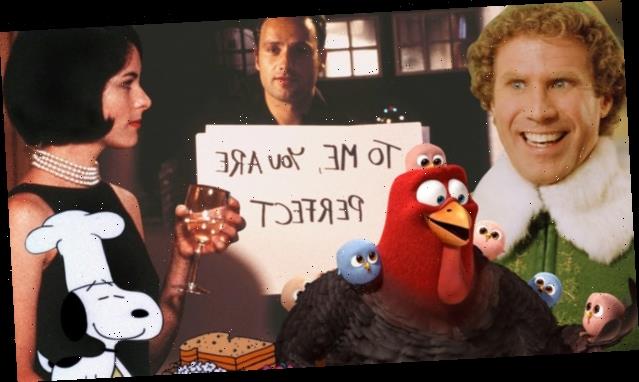 15 Thanksgiving Movies to Get You in the Holiday Spirit

While it’s a tradition for football to follow Thanksgiving dinner, there aren’t any rules that say it has to be that way. After all, there are plenty of festive movies that can help you commence your post-dinner ritual of unbuttoning your pants and cozying into the nearest couch nook for a nap.

Here are a few Thanksgiving movies you’ll want to check out, some of which you’ll probably find on cable television — hello, A Charlie Brown’s Thanksgiving — and others you can stream on services like Netflix, Hulu, and Amazon. There’s a little bit of something for everyone, no matter your feelings about the holidays and all they bring to the, well, table.

If there’s one thing you can rely on during the holidays, it’s Hallmark to dish you a full schedule of feel-good movies. For Thanksgiving, that includes A Family Thanksgiving, the story of a wealthy attorney (Daphne Zuniga) who wakes up one morning to find herself in an alternate reality. Yes, you've see this same storyline set-up countless times, and yes, you should still watch this Hallmark version.

This movie is your chance to score a peek at Katie Holmes in the early 2000s. Holmes stars as 21-year-old April Burns, a woman living in a small New York City apartment (and, really, who isn’t?) who invites her estranged family to Thanksgiving dinner. The result is an interesting reunion — to say the least.

Resvisit the movie you loved as a kid for a bit of animated nostalgia. Watch as Snoopy and Woodstock share a piece of pumpkin pie, and even break apart a wishbone, then follow it up with A Charlie Brown Christmas to complete the full seasonal experience.

Home for the Holidays

Released in 1995 and directed by Jodie Foster, Home for the Holidays has all the elements of a great family comedy-drama. When her teenage daughter decides to celebrate Thanksgiving with her boyfriend, single mom Claudia Larson (Holly Hunter) decides to have dinner with her dysfunctional family — sound familiar? — in her childhood home. Naturally, a series of issues occur, along with a love connection between Claudia and her brother’s friend, Leo (Dylan McDermott).

Hear us out: The holidays are, essentially, about love and, even though this one’s about Christmas, it’s impossible to pass up a little Love Actually when you’re in a cozy, festive mood. Plus, it's hard to pass up a chance to revisit the cast, which, incase you forgot, includes Hugh Grant, Emma Thompson, Liam Neeson, Laura Linney, and Keira Knightley — to name a few.

In the mood for a classic black-and-white movie? Most people associate this holiday favorite with Christmas, but the 1947 film actually takes place during the annual Macy’s Thanksgiving Day parade, so, it’s the perfect movie to transition you from turkey dinner to decking the halls.

Snuggling up on the couch with a few kiddos (or maybe you’re just a kid at heart)? Try this computer-animated comedy about two turkeys (voiced by Owen Wilson and Woody Harrelson) who travel back in time to try and prevent Thanksgiving.

Love Greta Gerwig (who doesn’t)? This 2015 comedy-drama, which she wrote alongside Frances Ha’s Noah Baumbach, features the story of Tracy (Lola Kirk), a college freshman who finds herself alone on Thanksgiving. That is, of course, until her stepsister Brooke (played by Gerwig herself) joins her for some fun.

The House of Yes

This dark comedy takes place on Thanksgiving Day, when Marty Pascal (Josh Hamilton) brings his fiancée Lesly (Tori Spelling) home to meet his family. The one problem? His twin sister Jackie — who’s obsessed with Jacqueline Kennedy Onassis — has just been released from a psychiatric hospital and she’s not happy when she learns her brother is bringing a “friend.” Watch as Jackie, dressed like the former first lady, teeters between dealing with symptoms of borderline personality disorder and her fixation with her brother.

Yes, it’s a Christmas film, but, really, would a holiday be complete without a dose of Chevy Chase and his crew? Plus, the movie makes light of several things that are universal to all holidays, including less-than-favorable relatives, screwing up dinner and, of course, coming together in spite of it all.

Again, it's not a Thanksgiving film per say. But seeing as how you could watch Will Ferrell and Zooey Deschanel in Elf year-round, the passing of Thanksgiving means it's A-OK to add it to your regular viewing schedule until, well, basically the new year.

This 2000 comedy-drama combines the stories of four families in Los Angeles, each from a different background (African-American, Latino, Jewish, and Vietnamese) who come together for a melodramatic Thanksgiving dinner.

Thanksgiving makes a small appearance in this 1998 rom-com, but with a duo like Tom Hanks and Meg Ryan, the season for tuning in is always right. Watch as the pair fall in cyber love at a time when the Internet first emerged — and prepare for all the 90s fashion inspo.

Not your classic, touchy-feely holiday film, this drama features the story of Krisha (Krisha Fairchild), who decides to join her family for Thanksgiving after not seeing them for ten years. As if that’s not enough tension, the story also touches on the reality of addiction and how it affects a family as a whole.

Adam Sandler plays George Simmons, a stand-up comedian who’s famous, but has zero friends. But when he learns he has a fatal illness, he decides to befriend a fellow comedian, Ira Wright (Seth Rogen), who invites him to Thanksgiving dinner. What unfolds is a story true to Judd Apatow’s famously funny writing style.