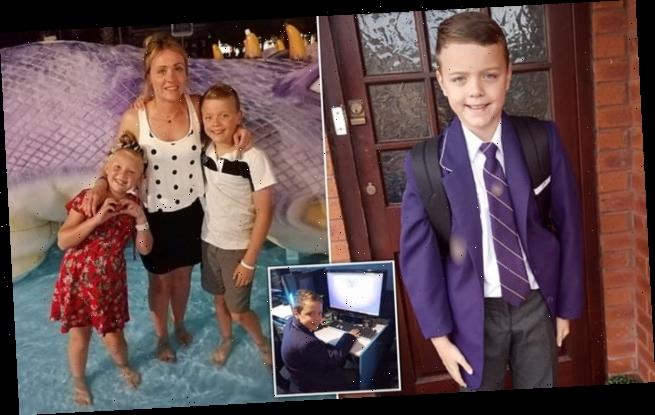 A real child genius! Schoolboy, 12, answers up to 124 maths questions a MINUTE after swapping Fortnite for online quizzes

A 12-year-old boy can answer up to 124 maths questions in just one minute after swapping computer games for online quizzes.

His mother Angela Livesey, 35, confessed she would need a pen and paper to work out the sums and said she can barely read the question in the time it takes Mason to calculate the answer. 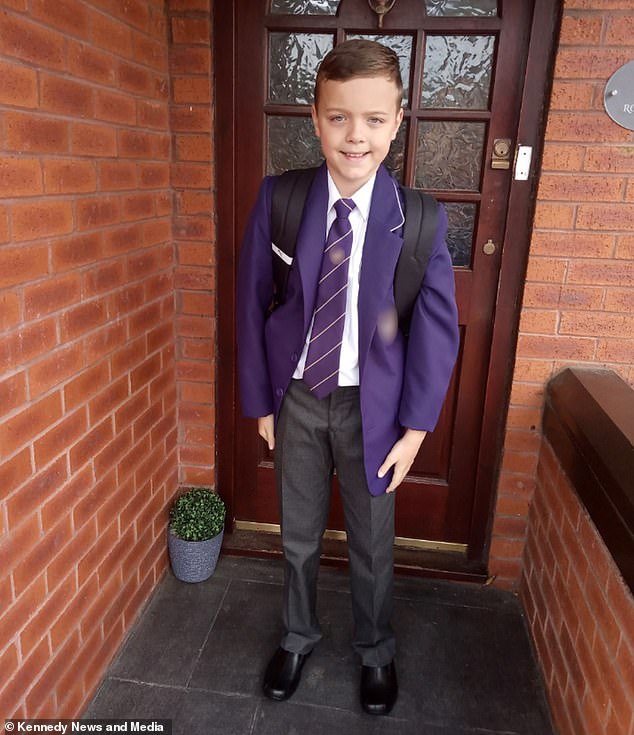 Mason Moorhouse, 12, (pictured) from Golbourne, Greater Manchester, has become a local celebrity at his secondary school after he was filmed completing a series of mental maths questions at lightning speed 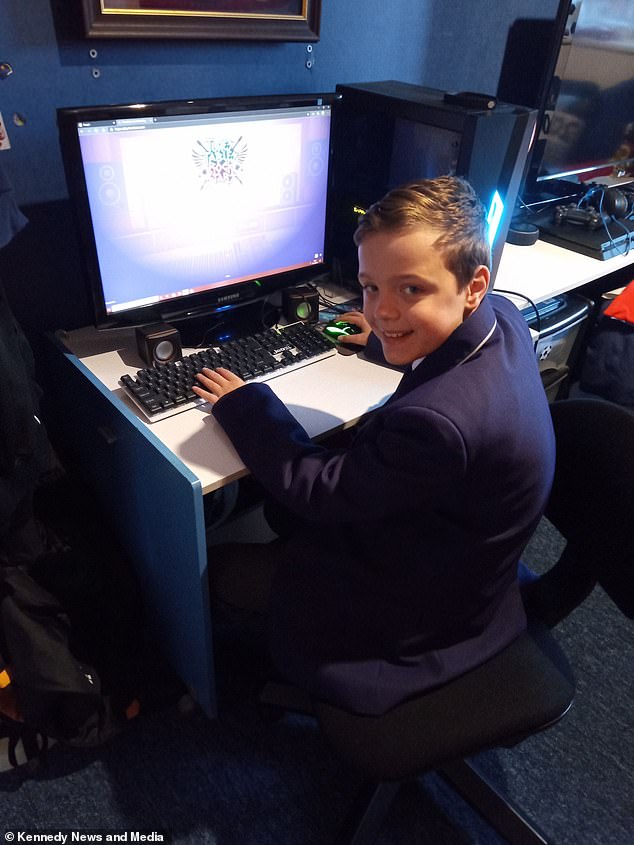 Mason used to be a keen Fortnite player, but his mother says he has now ditched the popular computer game in favour of practising his maths

The schoolboy’s impressive performance has earned him a place at the top of the school leaderboard, which takes in scores of 16 year olds.

Angela, who is also mother to nine-year-old Keira, said her son used to enjoy playing Fortnite but now spends more time practising his maths skills to keep himself ahead of the competition.

She said: ‘He’s always been good at his times tables, but now he’s got used to this game on the computer he’s just got quicker and quicker.

‘I don’t know how he works it out so fast in his head, and his little fingers are on fire on that thing. It’s like lightning speed and there’s no stopping in it.

‘He spends an hour on it every night after school and even at weekends you can hear the clonking on the keyboard, so he’ll wait until we’re up to go on it so he doesn’t wake us up.

‘The whole school is competing on this leaderboard from year seven to year eleven and he’s at the top. His score’s on the school forum and kids have been saying, “who’s this Mason?”. 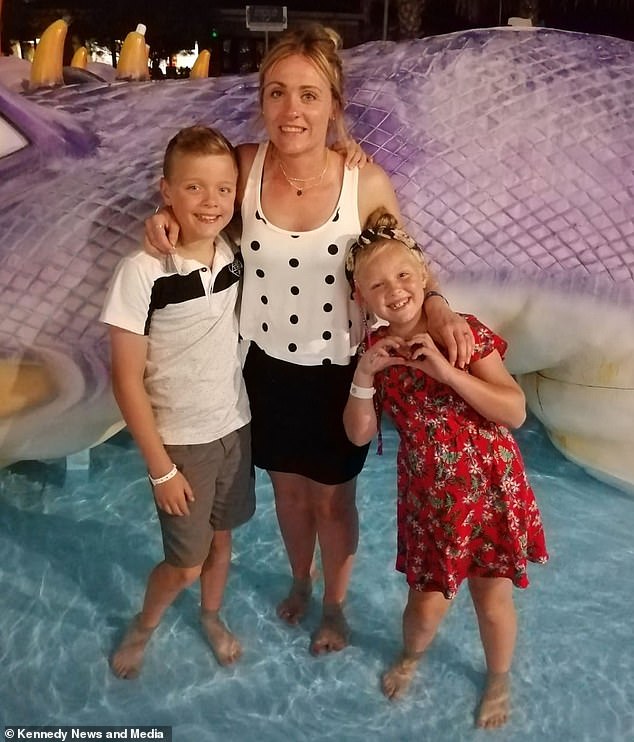 Angela (middle) said that she would need paper to work out some of the questions that Mason (left) reeled off. Pictured: Mason, his nine-year-old sister Keira (right) and Angela on holiday in Alcudia, Spain in August 2019Mason used to be a keen Fortnite player, but his mother says he has now ditched the popular computer game in favour of practising his maths

‘He was sat next to a girl in school the other day and she turned and asked him, “are you that Mason from TTRockstars?”. He’s like a little celebrity. I’m chuffed to bits for him.’

Times Tables Rock Stars is a website which aims to teach children maths by having them complete quick-fire quizzes, with their speed, accuracy and number of correct answers contributing to their overall rank on the leaderboard.

Mason’s father Keith recorded one of his son’s quick-fire maths sessions as proof for those who didn’t believe his scores.

More than 8,000 people have reacted to Angela’s video since she posted it, with more than 2,500 people commenting to praise Mason’s talent.

Angela said: ‘Everyone at first was saying “that can’t be right”, “what are you doing”‘, “are you hacking” and that’s why Keith took a video to prove it is right. This is what he’s doing.

‘If he didn’t have anything to compare it to I think he’d think it’s normal speed, but with the leaderboard he knows he’s thinking “I’m not doing too bad, here”. 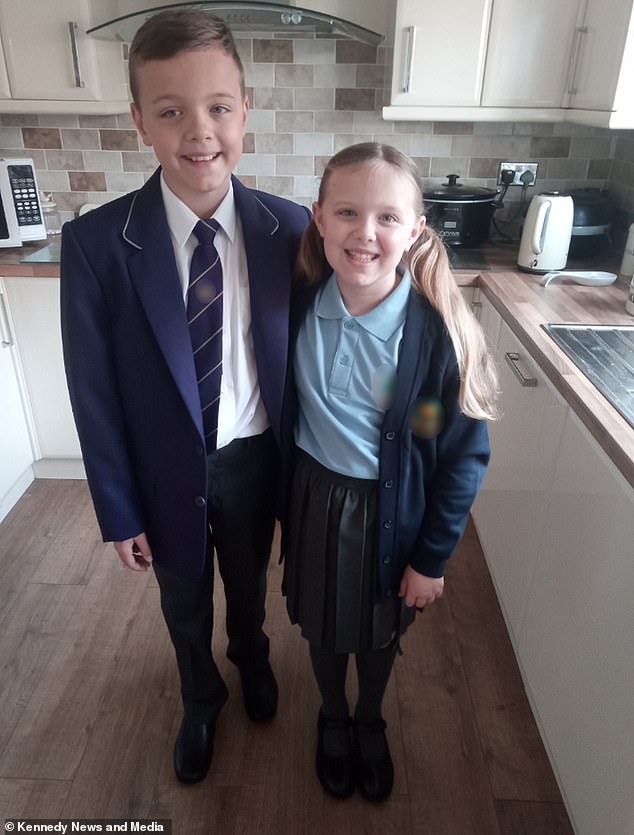 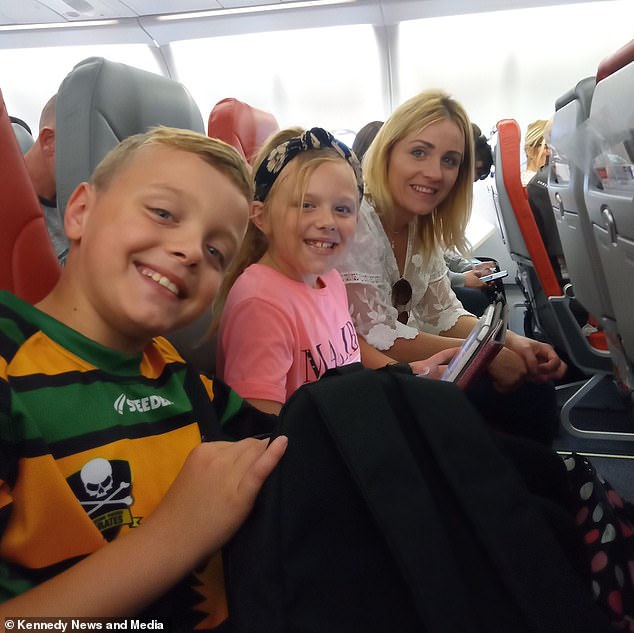 Angela said that all of Mason’s school is competing on the maths quiz game but he has managed to beat all other pupils, including those in older years, to top the school leaderboard

‘The teachers are in amazement, and his tutor group are cheering him on because he’s got them to the top of their leaderboard.’

Angela, who works as a prison officer, said she would ‘need paper’ to complete some of the questions her son breezes through, and 43-year-old geology graduate Keith can’t keep up either.

Mason, whose high score is 124 correct answers in one minute, said he’s enjoying his newfound notoriety at school.

He said: ‘My form is at the top of the leaderboard, so they’re well happy.  Maths is my favourite subject, so it’s linked well. My teacher’s like “how are you so quick at it”. I just played it and I’ve got better and better each time.

‘We have to pick a username, so it’s hard to identify who that person is, but my teacher put my name next to the score [on the forum] and everyone recognised me from that.’

The 12-year-old hopes to be a footballer or rugby player after school but if those career paths don’t work out he would also like to earn a degree in maths. 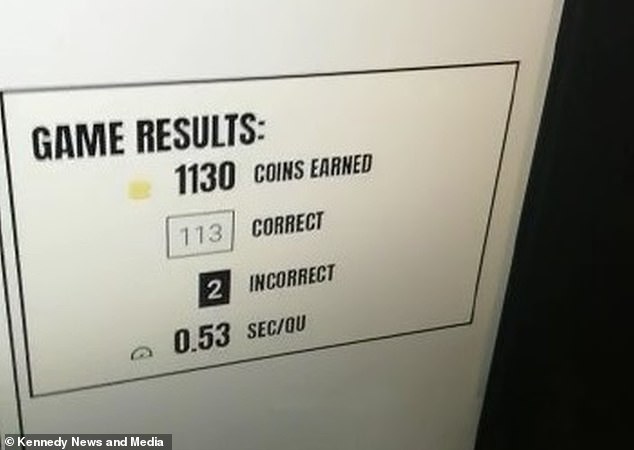 Incredible talent: Evidence from one of Mason’s attempts shows that he completed 113 correct questions in one minute, at a rate of 0.53 seconds per question

His mother Angela Livesey, 35, posted the footage on social media to prove to others just how good her son was at Times Tables Rock Stars

People were quick to respond to Angela’s video, with one person calling Mason a ‘child genius’, while another suggested he tried for a World Record