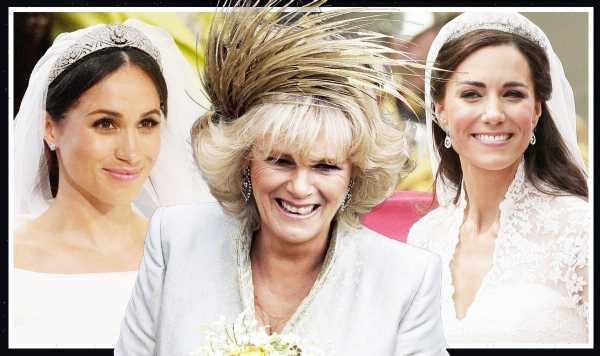 Prince Charles knew Camilla Parker-Bowles for decades before the pair finally tied the knot in 2005, and their royal wedding was very unusual in many respects. The couple married at the Windsor Guildhall in a civil service as both were divorced, and a religious wedding blessing and a reception were later hosted at Windsor Castle. Royal weddings are almost guaranteed to include a tiara, but the Duchess of Cornwall swayed from this tradition for her nuptials.

As Camilla and Charles’ wedding didn’t take place in a religious setting, it is thought Camilla opted not to wear the traditional royal tiara as she said ‘I do’.

Kate Beavis, owner of the contemporary wedding blog Magpie Wedding and the ECO Weddings Shows, told Express.co.uk: “The Duchess of Cornwall wore two outfits on the day both designed by Anna Valentine and Antonia Robinson.

“Her second outfit was a full-length pale blue chiffon dress with a gold embroidered coat over the top.

“Her headpiece was unusual and a real statement – made from dramatic gold feathers.

“She did not wear a tiara as it was not a church wedding.”

Camilla’s decision not to wear a tiara has proved to be unique, as royal brides since have taken the Queen up on the offer of borrowing a tiara for their trips down the aisle.

Kate Middleton married Prince William at Westminster Abbey in 2011, and the future Queen borrowed the Cartier Halo Tiara from the monarch’s extensive collection.

The tiara was gifted to then Princess Elizabeth by her parents as an 18th birthday present in the 1940s, and its main feature is its delicate scrollwork.

The tiara started life in the 1930s when it was commissioned by the Duke of York for his wife, just a few weeks before they became King George VI and Queen Elizabeth.

Meghan Markle also wore a tiara when she married Prince Harry in 2018, Queen Mary’s Bandeau Tiara, which belonged to the Queen’s paternal grandmother.

Art Deco in design, Queen Mary’s Bandeau Tiara was made to accommodate a brooch, and it is adorned with several glistening diamonds.

The Greville Emerald Kokoshnik Tiara perfectly complemented Eugenie’s green eyes and, with an estimated eight-figure price tag, it is thought to be one of the most expensive royal diadems.

Beatrice’s choice, Queen Mary’s Fringe Tiara, was particularly special as it was the same tiara worn by the future Queen when she married the Duke of Edinburgh in 1947.

The tiara had only previously been worn by the Queen’s only daughter Princess Anne when she married Captain Mark Phillips in 1973.