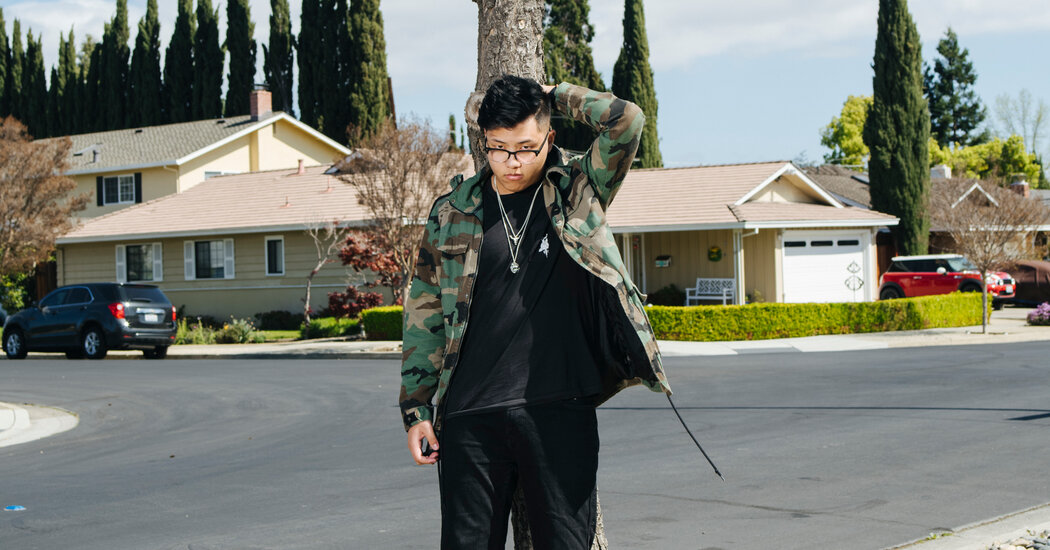 With millions of fans on social media, gamers have stepped up their game, incorporating luxury, streetwear and even cosplay into their looks. 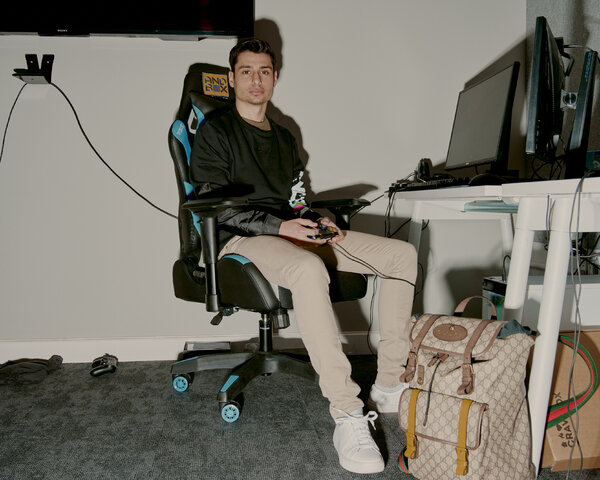 Video games entered mainstream culture decades ago, but these days, gamers are more like celebrities, with millions of fans online. That means, among other things, that the days of gamers wearing jorts and oversize T-shirts are long past. Esports athletes and streamers alike now dress with urban panache mixed with opulent sensibilities.

Major brands have taken notice. Tyler Blevins, the mega-popular video game streamer known as Ninja, signed a deal with Adidas and released a limited edition run of “night joggers,” which sold out almost immediately. Gucci partnered with the London esports team Fnatic on a $1,600 dive watch. Louis Vuitton teamed up with League of Legends, the most popular esport in the world, for a limited run of capsules and shirts. And the designer Jeff Staple, often credited with kick-starting the collectible sneaker revolution, worked with the Overwatch League on a line of jerseys.

“I feel that while streetwear was rising, gaming culture was also rising,” Mr. Staple said. “In 2018, when Overwatch League first reached out, that’s when the paths started to cross.”

Gaming accessories too are style. Players can be seen wearing large headphones with keyboards sticking out of their backpacks. HyperX creates a popular line of gaming headsets. Its ambassadors include the singer Post Malone, JuJu Smith-Schuster of the Pittsburgh Steelers and Daigo Umehara, the Street Fighter champ.

For their fans, players display a wide array of styles, from a team-branded hoodie to a camo jacket to Pokémon cosplay. We spoke to three players about how they think about their appearance: an influencer, a pro gamer and an amateur gamer.

The 24-year-old Twitch streamer known as Pokimane has more than 7 million followers on the platform. Her style mixes comfort, cute spectacle and streetwear. 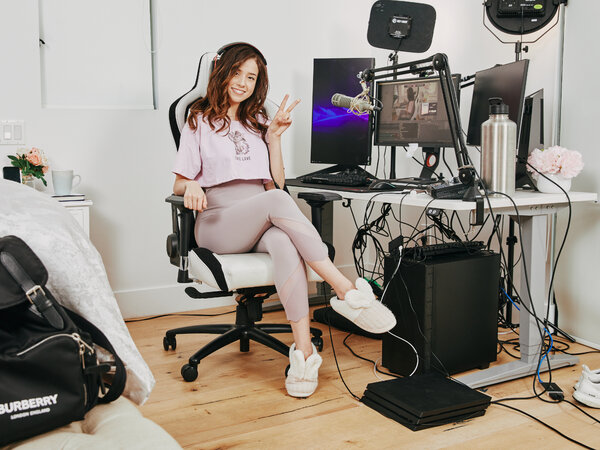 I see many streamers and esports athletes dying their hair in nonnatural colors. Why?

Whether it’s your hair or accessories, it really becomes part of your branding and, in essence, iconic to who you are. So for example Ninja: It’s the blue hair. For me, it’s become kind of curly wavy brown hair and wearing a headset, almost all the time.

In regard to accessories, what do you like to wear while you stream?

Streetwear is especially popular in gaming and esports circles. Why?

It’s still something that you feel comfortable in. You can dress it sort of up or sort of down. That aspect of comfort is really important when you’re sitting down for six plus hours on your PC chair.

What streetwear brands are you wearing right now?

I love Prix. I’ve always really enjoyed some nice athleisure — if you would consider an Adidas or Nike a kind of streetwear. And one of my all-time favorite stores is called Maniere De Voir.

Is there pressure for women who stream to want to look cute, and does that come at odds with comfort?

I think because no brands are specifically targeting that — clothing that’s comfortable to sit in or walk around in — athleisure seems to be what everybody defaults to because there isn’t another option. Adidas, Nike and especially Lululemon.

With Twitch having a largely male audience, is there more demand to wear sexier outfits? Does that clash with your more modest look and how do you navigate that?

How has the pandemic affected your style?

Initially, quarantine didn’t impact my style too much since I’ve always worked from home. However, I’ve recently started reaching for the pieces I’d usually save for special outings, and wearing them at home just to spice things up and put them to use until it’s safe to go out again.

Known as ZooMaa, he is a professional Call of Duty League player for the New York Subliners, part of the Andbox esports organization, which houses a clothing design arm. Earlier this month, he announced that he would be stepping back from competition due to ongoing wrist pain, though he will continue to stream.

What are you wearing here?

I wore a part of my collection, which is the hoodie, and I just put on a pair of jeans and some white shoes to go with it. I’m a very simple guy when it comes to clothes.

What was your goal with this collection?

What do you mean by “scream ‘gamer’”?

Like a team name maybe. Or like a bunch of sponsored jerseys, stuff like that. I wanted something more, like everyday wear that people can wear to work or wear to school or wear around the office.

Is there anything wrong with clothing that screams “gamer”?

Absolutely not. It’s just, for me, not everybody knows much about gaming, so I just think having something that’s more versatile that anybody can wear would be really cool. But obviously I’m a gamer, so having a little bit of gaming twist to it.

What things are integrated into clothing for gaming purposes?

Hand warmers are a big thing. So having a nice hoodie pocket or having nice pockets like that can keep your hands warm in between matches.

And why are hand warmers important?

The venues are always really cold. So having hand warmers on deck, just holding between matches keeps your hands nice and warm and loose.

You have a custom PlayStation 4 controller made by Scuf Gaming. Explain the importance of having a custom controller.

It’s a comfort thing. They do little things that help your game. They give you a really good grip on controllers. The smart triggers and smart bumpers, which I think is like the most important thing. They’re just more responsive than a regular controller.

You grew up in Cranford, N.J., and now you represent the New York Subliners. How important is your image?

It’s pretty important to me. I always want to rep the team that I play for just because I’m proud of it.

Have you changed your look in the pandemic?

Not really, just like to change styles depending on what’s hot and what season it is.

The 20-year-old gamer and upcoming Twitch streamer out of San Jose, Calif., goes by Nate.

Explain your get-up with the camo jacket.

I decided to pick up that jacket simply because it’s something a little bit different but not too flashy. I tend to not wear a ton of print varieties of colors, but I think camouflage is something that’s not really worn too much anymore.

And what are these necklaces?

One, a skull, and the other one is a pendant of a lion. They add a little bit of flair to whatever you’re wearing and it does add a sense of personality to your outfit. I think one of them in specific looks like an esports team logo, Houston Outlaws.

And then the rest of your ensemble?

So starting with the shoes, I’m wearing the Adidas Yeezy Boost Pirate Black. I think they stand out. Fairly simple because they’re all black, as well as the Levi’s 501 original fit men’s jeans.

You’re wearing HyperX headphones, and HyperX has landed endorsement deals with major athletes and gamers. Is that why you chose them?

I think HyperX makes a lot of audio devices with better quality and a little bit more comfort as well as with just a cleaner look.

What about the keyboard you’re using?

The keyboard is a Ducky One 2 Mini. It is a 60 percent keyboard, meaning that it’s traditionally smaller than most keyboards also comes with less keys, so the arrow keys are actually also the I, J, K and L keys. I hopped on this hype train where the player Tfue had been using this keyboard. I thought it was really cool.

As you build up your presence, you gain more clout. And with clout comes a greater adherence to your personal image and brand. How does fashion play into all of that?

How has your style changed during lockdown?

Since quarantine, I have been going for a much more comfortable look yet with a skater aesthetic. I think the best thing about dressing this way is that it doesn’t have to be super expensive. Finding clothes, with most places being closed and mainly being inside most of the time, there’s lots of time to shop online.

Target handing out FIFTH $500 Covid bonus to 375,000 frontline workers as a 'thank you' for working during the pandemic