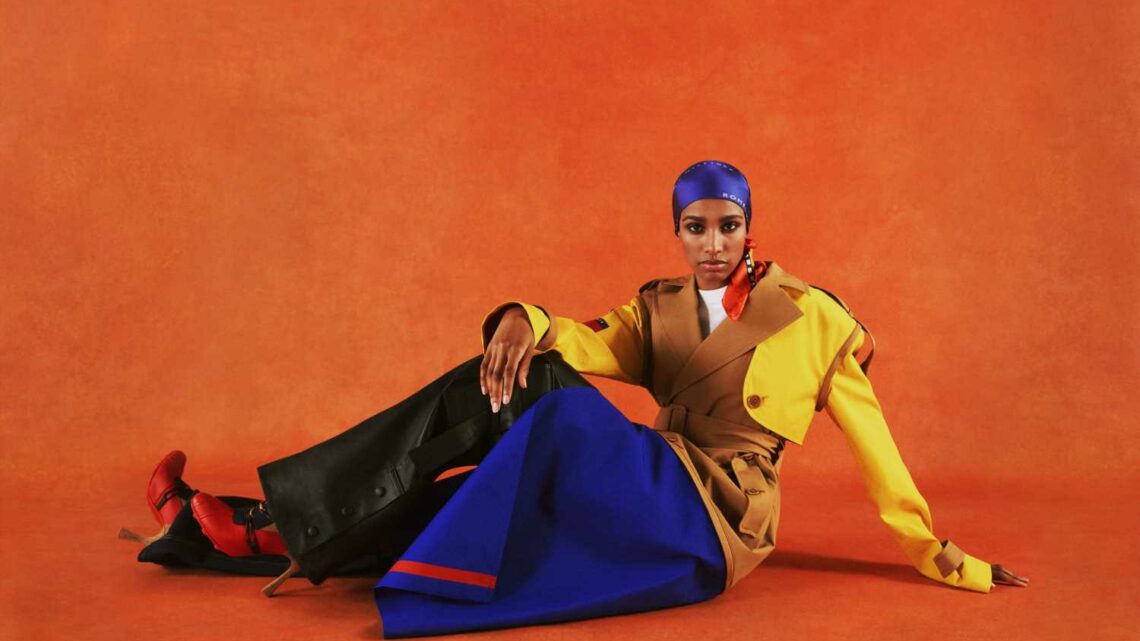 Tommy Hilfiger has taken mentoring to another level.

The brand, which is owned by PVH Corp., will roll out the Tommy x Romeo capsule today, codesigned with Brooklyn designer and Hilfiger’s long-term mentee, Romeo Hunte. The dual gender fall collection digs into the Hilfiger archives, using Hunte’s signature deconstruction techniques to reconstruct, remix and reimagine iconic pieces such as the classic bonded trenchcoat remixed with sailing jacket colorblocking or clashed with a leather biker jacket.

The Cape Makes A Return On The Runway

The fall Tommy x Romeo capsule will be available starting today at tommy.com in the U.S., at exclusive wholesale partner Selfridges in the U.K. and on romeohunte.com. 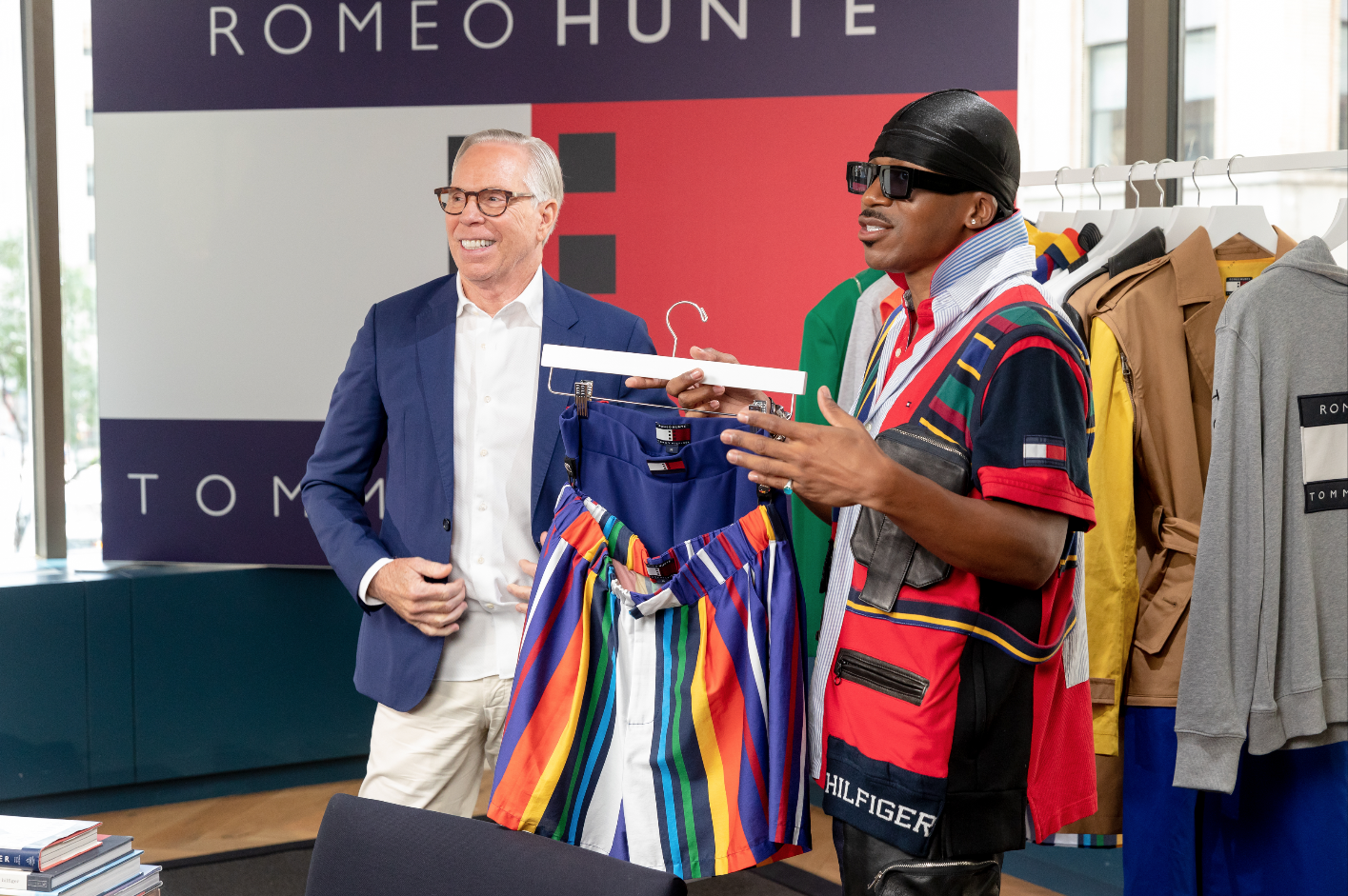 The capsule includes an oversized shirt, T-shirt, hoodie, hybrid short, hybrid leather and denim pant, boxy blazer, trenchcoats, puffer jacket and utility vest. Prices on apparel range from $130 for the T-shirt to $990 for trenchcoats and the utility vest. The line also features boots for $269, as well as accessories such as bandannas, eyewear, trunk bags, and caps, ranging from $119 for the bandanna to $269 for trunk bags.

“As a young, upcoming designer, I was lucky to be guided by incredible leaders who made a huge impact on my career,” said Hilfiger. “I am passionate about passing that on, mentoring the next generation of design talent. Romeo Hunte is one of those truly exceptional newcomers — someone you know is going to make an impact as soon as you can see his work. I’m really proud of our capsule — it’s truly a meeting point of our two worlds. Together we’ve also really focused on passing the mic to the next generation of BIPOC creatives and through leaders to increase representation and amplify their talent globally. Through the People’s Place Program, we want to give them a true platform to shine.” 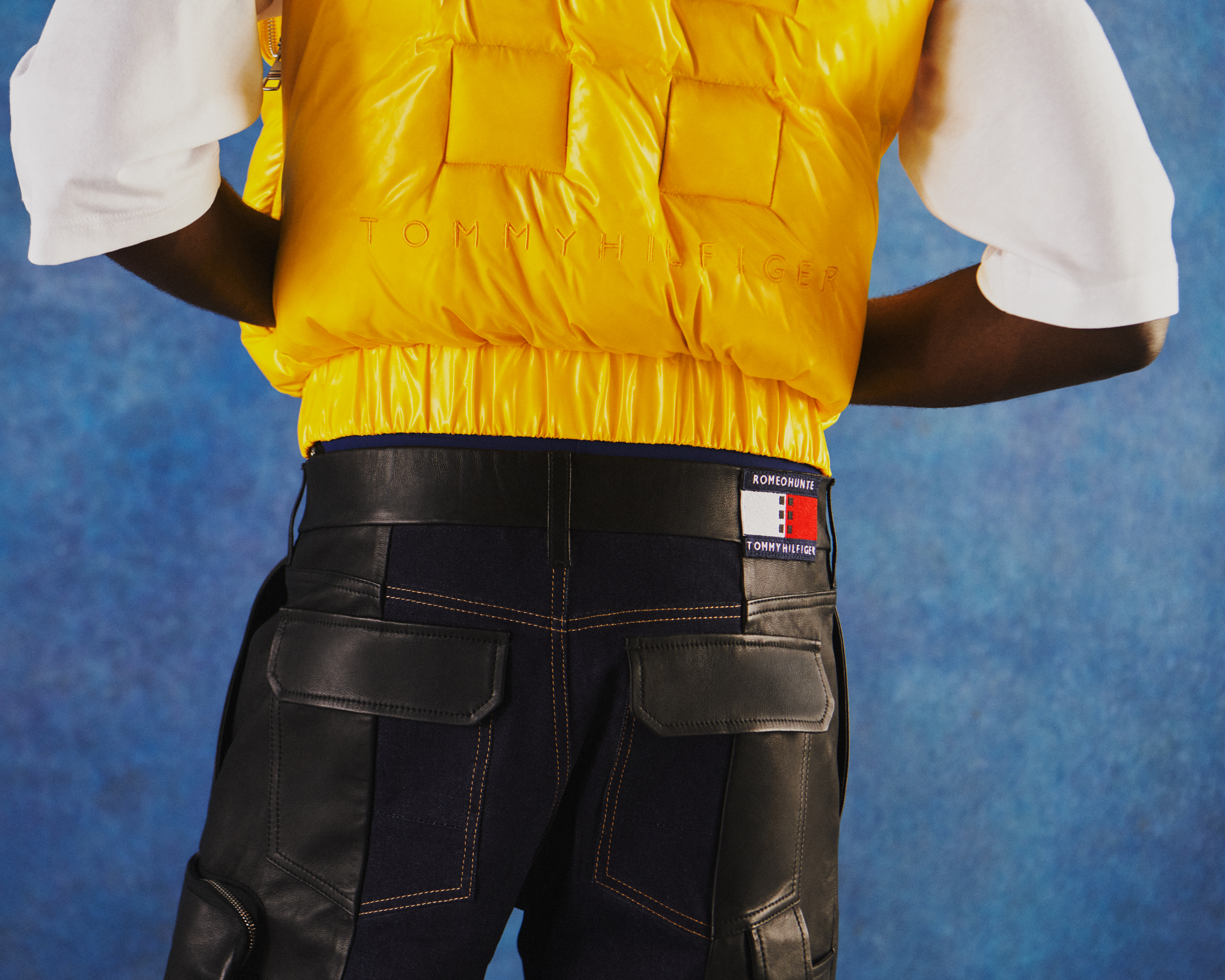 Hunte added, “Tommy has been such a supportive mentor to me over the years. Revinvention is a fundamental part of my design DNA, so pushing the boundaries of the brand’s archives has been an incredibly creative and meaningful experience. We also wanted to take this concept further, challenging the status quo from the design process to the campaign and the crew to reimagine and redefine the future. I’m really proud of what we’ve achieved and hope to inspire the next generation of talent to dream big.”

For the capsule, Hilfiger opened the archives to Hunte, who clashed classic Hilfiger design codes with his signature techniques and with a focus on nongender-specific outerwear. He worked throughout lockdown to create the line. 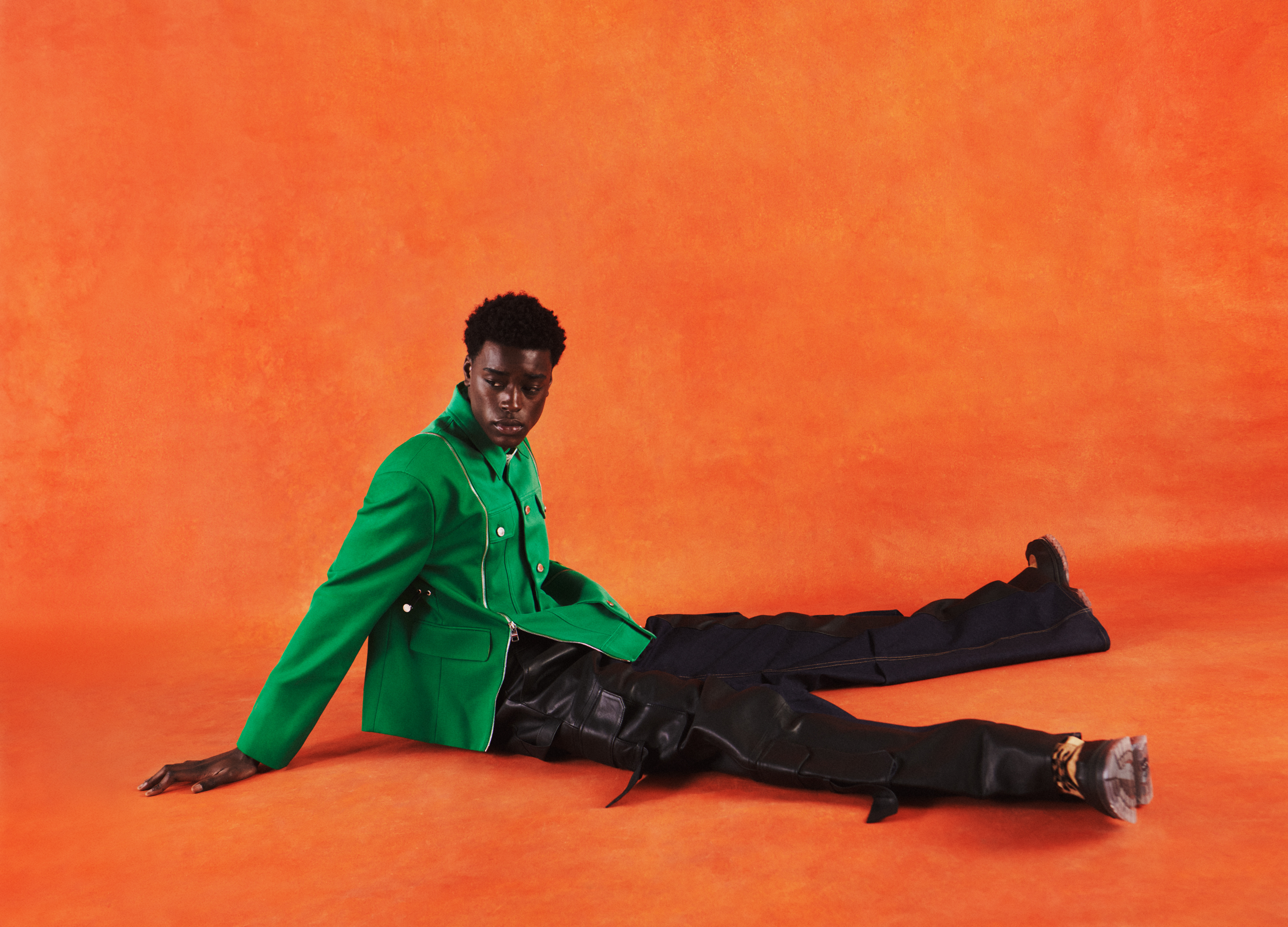 The collection brings a modern and bold twist to the iconic pieces that the brand is best known for — the trenchcoat, the biker jacket, the Oxford shirt are all remixed and reimagined. The result is Manhattan prep meets Brooklyn Street. Hero styles include mixed media outerwear with clashing silhouettes and contrasting fabrics. The Tommy preppy stripe is reworked in bold primary colors inspired by the New York City Subway map, and Hilfiger’s iconic flag is combined with Hunte’s graphic six-block logo.

When asked how he went about developing the capsule, Hunte explained, “The first thing I envisioned was the logo — the hybrid of both logos. I started envisioning ideas immediately.” He said he took his six-block logo, which came out of a Buffalo check, and combined it with Tommy’s flag. “The thing about this is it’s all embroidered, it has a rubberized texture to it,” he said. “This is a collector’s item to me. The whole Brooklyn is going to go ape s–t when they see it,” said Hunte.

He added about the project: “The first thing I wanted to do was really impress Tommy and show Tommy and the industry what Romeo Hunte could do.”

Known for his outerwear, Hunte said he wanted to use mixed media, pointing out an overcoat with a blazer on the outside. For the “It’s Just a Trench” piece, “it’s not just a trench.” said Hunte. “You can remove the sleeve, you can drop the waist. I thought about the yellow, I thought about Tommy 90s, the cobalt blue. It’s a perfect piece that reminds me of my childhood.” 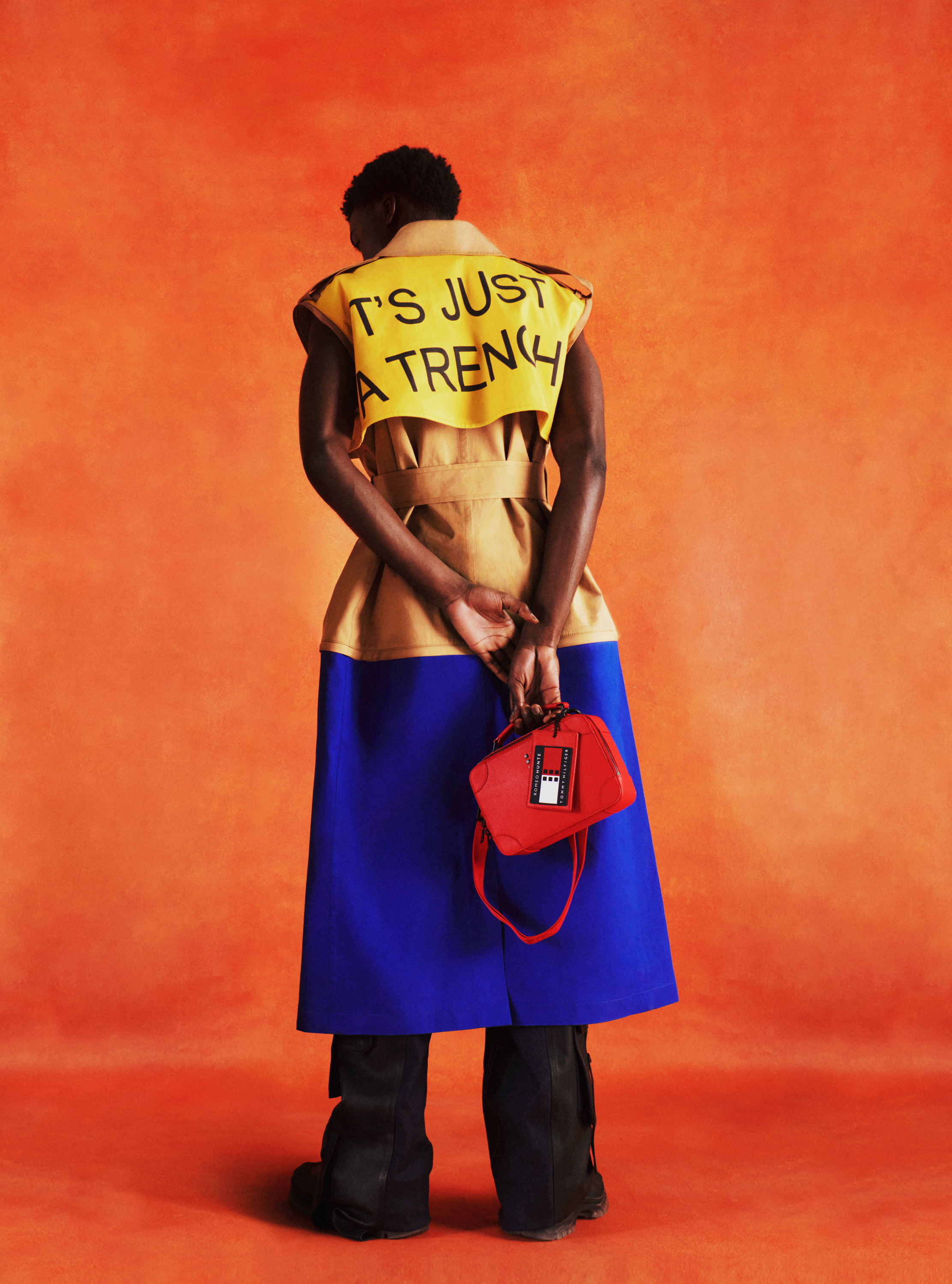 Hilfiger said he met Hunte about five years ago, he was very impressed with his drive and became his mentor. “He asks my advice on everything he does from his collection to his fashion shows to his team setup, and I’ve been happy to share my experiences with him and guide him,” said Hilfiger. The two first collaborated on Hunte’s fall 2020 collection, where Hilfiger opened his archives to Hunte, who looked to incorporate 12 vintage pieces into his fall 2020 collection, reinventing and upcycling them into something entirely new.

Asked what was it that Hilfiger saw in him, Hilfiger replied, “I see this relentless drive, and I see a lot of me in him because he started with nothing, he had a dream, he has a goal and he doesn’t give up. He may run out of a certain fabric and he finds another one. He may not be able to afford to have his fashion show in a certain venue and he finds another. He may not be able to deliver on time, so he goes to the factory at midnight. What I love about Romeo is he actually listens to my advice. You can give a lot of people advice and many people won’t listen. Romeo has sought out my advice and executes on whatever direction I usually give him.”

As for what Hunte has learned from Hilfiger, he said: “So many things I’ve learned — how to lead a team, strategic ways of doing a brand, how to pivot, how to be known for something.” He said the advice has made him want to push who he is, his career and where he comes from. “How can I change the narrative between luxury and urban street? How can I, as a young designer, who sometimes seems like an underdog, push forward to have an impact on the world? Tommy’s work ethic inspires me,” said Hunte.

The collection features about 21 pieces including accessories that will drop today. “We think it will sell out very quickly and then we’ll go back to the drawing board,” said Hilfiger.

Ronan McKenzie was the photographer, stylist and curator; Nathan Klein was the stylist, Amidat Giwa was the hairstylist and Megumi Matsuno was the makeup artist.

Two local artists in London and New York were invited to reinterpret the campaign imagery through vibrant wall art at key city spots in the week prior to the campaign launch. Painter and patternmaker Uzo Njoku painted her mural on Nassau Avenue and Banker Street in Brooklyn. In London, fine artist Annan Affotey is showcasing his talent by reinterpreting the Tommy x Romeo campaign imagery at 112 Tabernacle Street in London. The murals include a QR code for consumers to explore video content, including behind-the-scenes footage of the making of the murals and interviews with the artists, as well the ability to view and purchase the collection online.

As part of the campaign, seven one-off upcycled Tommy x Romeo polos will also be auctioned via the online auction site CataWiki, with proceeds donated to the Fashion Minority Alliances, a nonprofit focused on collaborating with fashion and industry stakeholders to build and foster a more diverse, balanced and inclusive industry that advances meaningful and long-term equity and advancement for people of color.