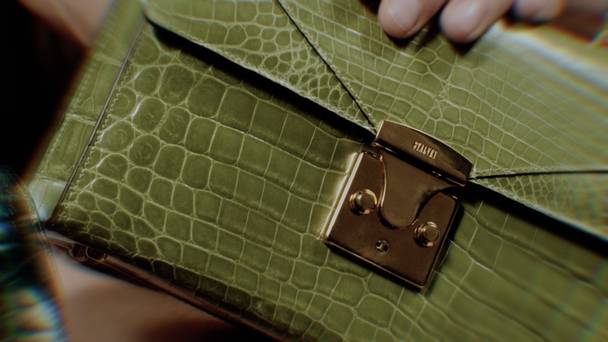 With enough sales savvy, you can make anything a must-have.

The Hermès Birkin and Chanel double flag shoulder bag might be iconic bags that never go out of style, except of course, in the year 2018 when a rising accessories designer made his alligator micro bag, made with a 24-carat handle, on sale for €10,000 and by placing it in the hands of the right people has blown all other bags out of the water. Jason Stalvey is the man behind his eponymous range that makes luxury goods in New York City.

Luxurious frivolity is all part of fashion’s enduring appeal. But this doesn’t have the same sense of enjoyment that Beyonce’s €45,000 patchwork Tribute Louis Vuitton boots did in 2007, largely accepted as a well-timed publicity stunt for the brand; this bag, with its day-to-day street style popularity is drawing an even clearer line between the haves and have nots.

The ever-increasing appetite for designer culture is becoming an all-consuming beast, fuelled by #OOTD pictures and money is fast outlasting taste with this conspicuous consumerism. There was a time not so long ago that most women in their twenties would have given their right arm for a Michael Kors bag, averaging at a somewhat attainable €250. It had that same designer feeling, but it felt within grasp, as did the LV Neverfull, which, once upon a time retailed for €400 before inflation lifted it to its current €1,000 price tag.

For some, depending on your disposable income, a Mulberry satchel was the next step up, but for most, a Prada Galleria or a Fendi Baguette were always impossibly out of reach, an unjustifiable expense that literally costs four times my rent. I love a designer purchase and wear my bags with pride, but there is something increasingly vulgar about this need to overspend for the sake of it.

So, when magazines declare a new ‘it bag, one that happens to cost €10,000, I can’t help but feel jipped, not only because I’m not being served suggestions for things I can actually enjoy but in any of the stories on Harper’s Bazaar, Vogue or InStyle, there’s no mention of the absolutely insane price tag.

On its website, getting to know Jason Stalvey, who, by all accounts seems like an exceptionally intelligent individual, a biochemist at Columbia University turned luxury designer is impressive by anyone’s standards, and its ethos is admirable: at its core, he wants to create an American-made product and for those who are in a different tax bracket, they will always find the money to spend however they wish.

Gigi Hadid has worn it 11 times! Priyanka Chopra has two! Rihanna loves it! Good for them, but I am neither the supermodel daughter of a billionaire, a Bollywood superstar or a living music legend. Not to mention the fact that the chances are, they aren’t even paying for it in the first place, and when everything is free, nothing is impossible.

“At the end of 2017, STALVEY launched a 24kt gold capsule collection, a newly-developed process that evokes Jason Stalvey’s previous career in biochemistry. This capsule marks the first time in history that 24kt gold is embedded into exotic skins, a process that took over two years to perfect. This exclusive technology was developed as a partnership with the world’s leading aeronautic laboratory along with the premiere luxury tannery in France,” it reads.”

“If you’re not familiar with the brand, learn it, memorize it, and bookmark it now. It’s not every day that you come across a high-end bag that’s made right here in the U.S.—New York City to be exact. The opulent brand launched just four years ago in 2014, but it already boasts A-list fans.”

There used to be a time when watching celebrities flash their cash was influential – after all, it’s how the hot pink Motorola Razr became the ‘it’ gadget for women of my generation in the noughties – but now it’s getting out of hand. It’s taken me some time, but I think I’m finally wising up.