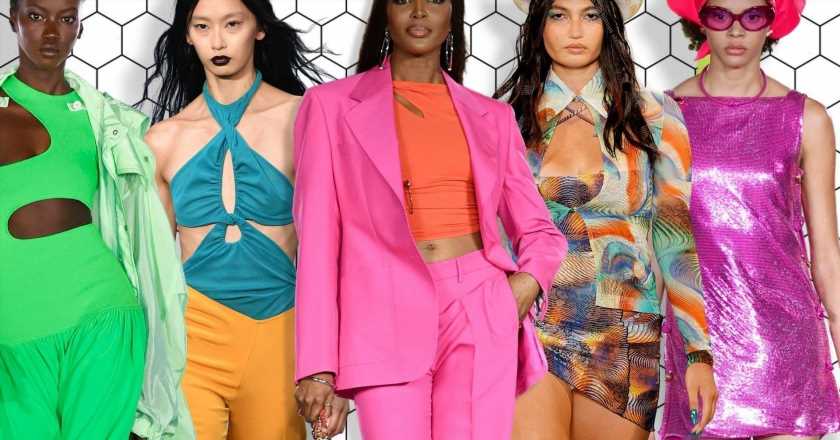 Written by Naomi May

From peekaboo dressing to the return of sky-scraping skirts, this summer’s trends are going to put the fun back into fashion.

The glitz! The glamour! The glitter! The spring/summer 2022 collections were proof that designers across the board are betting big on dopamine dressing for this year by hiking up the hems of skirts and establishing the waist and hips as the body’s new erogenous zone. Fashion will be bigger and bolder and more baring than ever before, a sartorial riposte to to the feral state we’ve existed in for much of the past two years.

There were notable moments for big brands, too. In Milan, there was a serendipitous collaborative effort between Fendi and Versace, which saw Fendi directors Kim Jones and Silvia Venturini Fendi design 25 Versace looks, and Donatella Versace reciprocate by imagining 25 Fendi looks. A first of its kind for both brands, the show notes aptly summarised the mic-dropping mash-up by describing it as “a celebration of Italian fashion and a to-hell-with-it disruption of the established order of things, Fendace is Fashion with a capital F – and a capital V. Together they stand for Freedom, Fun and Virtuosity.”

A few days later, as the fashion cognoscenti descended upon the French capital for the final hurrah of peacocking, Balenciaga flipped the script by eschewing a catwalk in favour of a 10-minute Balenciaga-themed episode of The Simpsons, which was preceded by a live-streamed red carpet, and Virginie Viard resurrected all of the 90s nostalgia for Chanel’s retro-inspired collection.

The takeaway is clear: this summer, with the stop-and-start lockdowns that marred 2021 (hopefully) a thing of the past, fun is to be injected back into fashion with all of the flesh-flashing, midriff-baring and OTT trends anybody could wish for. These are a few we’re betting everybody will be wearing in no time at all.

The return of the micro mini

If the Hemline Index theory is to be believed then our hemlines become increasingly vertiginous as the economy booms, which is fitting given the post-lockdown wave we’re collectively riding. Across the board at fashion month, bottom-grazing, teeny tiny micro miniskirts were as ubiquitous as Anna Wintour’s bob-and-sunglasses combination.

At Miu Miu in Paris, they sat on the hips in a blink-and-you’ll-miss-it nod to the once floor-scraping school skirts of yesteryear, while at Kim Shui, vertiginous hems kept space-dyed mini dresses short and sweet. Whichever way you choose to embrace next year’s teeny-tiny hems, the sartorial diktat is clear: get those legs out of hibernation once and for all.

At Stella McCartney, Rejina Pyo and recent LVMH prize recipient Nensi Dojaka’s shows, pushing the boundaries of flesh-flashing was asserted as a main priority, as the designers took it upon themselves to establish a buffet of erogenous zones across the body; there were cut-out slits located on the pelvis, the chest and the stomach.

The appeal of baring all lies in its versatility; here’s a trend that you can either politely dip a toe into by way of a modest slit or dive headfirst into the deep end and let it all hang out by embracing a barely-there mini. The one thing to keep in mind is that less is absolutely more, quite literally.

The good news for those whose styles sit as far away from flesh-flashing fashion as can be is that androgynous oversized suiting is also set to be big next year. Jil Sander and Rejina Pyo both endorsed the trend in the form of big and boxy suits in versatile hues, while Donatella Versace made the case for a hot pink two-piece.

In Copenhagen, the dynamic duos were imagined in a sea of whites and creams (most notably at Holzweiler and Baum und Pferdgarten), a real-life iteration of Scandinavian sensibility done right.

If you’ve been struggling to fit your life in your bag, then you’ll rejoice at the fact that fashion’s love-in with teeny-tiny totes is fading into the distance of its rearview mirror. In their place are XXL totes, with an emphasis on the X.

Embraced by Max Mara and Tory Burch, next year, in accordance with the plethora of plans we hope to be embroiled in, a capacious carry-on is the only plus-one you’ll need, which leaves plenty of room for all of that hand sanitiser.

If the last 18 months have been defined by elasticated waistbands and more gym leggings than you could shake a stick at, then the next year looks set to be determined by high-octane glitz and glamour. At Loewe, Northern Irish designer JW Anderson reinvented the thigh slit by adding a hole to sequin-smothered slip dresses, while in New York, buzzy designer Kim Shui made the case for tiny tops, cowboy hats and torsos aplenty; a veritable case of more-is-more peacocking done right.

The overarching mood across the board at the spring/summer 2022 shows was that fashion is back, and it’s time – once and for all – to dress for the occasion.