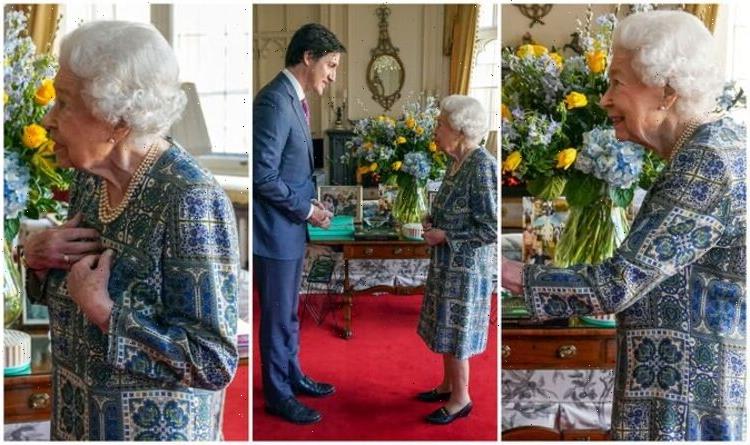 Why the Queen will not return to Buckingham palace

The Queen met the Prime Minister of Canada Justin Trudeau today at her home, Windsor Castle. For the occasion, Her Majesty wore a long-sleeved blue, yellow and white dress, which many have argued was an homage to Ukraine which is currently being invaded by Russia. The Queen paired her dress with some black shoes featuring a small heel, however the 95-year-old was not seen walking much in the shoes, preferring to stand still in one spot as she met the Prime Minister.

She then, of course, wore her signature pearl necklace with some matching pearl earrings.

Although the Queen normally wears her staple piece of jewellery which is a brooch, she did not appear to be wearing one today to meet Mr Trudeau.

The monarch, who usually takes a neutral stand on political matters, greeted Mr Trudeau in front of a vase of blue and yellow flowers.

These, along with her blue patterned dress appeared to be a subtle message of support for Ukraine. Blue and yellow are the colours on Ukraine’s national flag.

Royal fans took to social media to praise the Queen’s style and first in-person appearance for some time.

One Twitter user @loveforcambridg said: “So lovely to see Her Majesty having in-person engagements again.”

“What a gorgeous dress she’s wearing too!”

Twitter account @saveHOVE said: “Thank you for the yellow and blue Ukraine national colours floral display, front and centre for the cameras!

While the Queen wore pearls and a blue patterned dress for the occasion, the 50-year-old Prime Minister of Canada sported a blue suit and purple tie.

Mr Trudeau is in the UK for talks on the war in Ukraine with his Dutch counterpart Mark Rutte and Boris Johnson.

The Queen did not carry the walking stick she has been using of late to accompany her blue patterned dress.

She smiled warmly at Mr Trudeau as he held her right hand in both of his.

The Canadian Prime Minister was seen laughing as the Queen gestured towards herself during the meeting in the Oak Room sitting room.