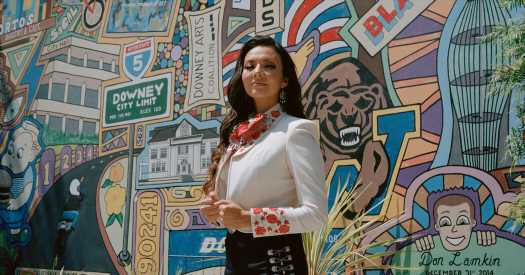 How a former white enclave became an aspirational suburb for Latinos in Los Angeles. 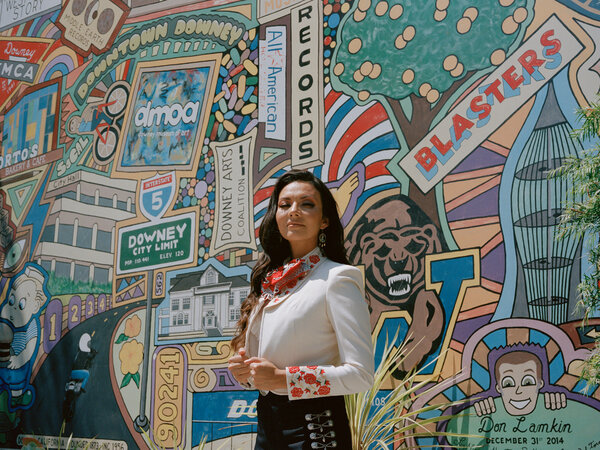 I was having dinner at some fancy beach-side eatery in early March when someone said they had just moved to Downey, a Southeast Los Angeles suburb 12 miles south of downtown.

The other Latinos at the table oohed. “You finally made it,” someone said. “To the Mexican Beverly Hills.”

In many ways, that is what Downey represents. It’s hoity-toity, gilded and more conservative than surrounding neighborhoods — a status-marking place where the average household income, at $88,000, is significantly higher than in other areas in Los Angeles with a similar ethnic makeup. In East Los Angeles, which is also predominantly Latino, the average income is $56,000, according to census data. (If you’re wondering, the average income in Beverly Hills is $191,000.)

It’s the kind of place where many people feel entitled enough to not wear face masks despite coronavirus infection spikes, where many homes featured “Thank you, Downey PD” banners at the peak of the George Floyd protests — but where an overwhelming majority of its citizens voted for President-elect Joseph R. Biden Jr. over President Donald J. Trump. (With a vote of roughly 2 to 1 for Mr. Biden, Downey voted more conservatively than Los Angeles County as a whole, which voted for him 3 to 1.)

In short, it’s a great example of a place that rebukes the idea of a singular Latino vote, or of any ideological uniformity among the nearly 61 million people of Latin American descent who live in the United States.

Because even in the so-called Mexican Beverly Hills, Latinos are not a monolith. In October, the city was trending on Twitter after a “Latinos for Trump” caravan rode through north Downey, drawing snarky social media criticism. That same morning in South Downey, a single horseback rider galloped down Imperial Highway, drinking beer and professing his disdain for the president in Spanish, as people cheered him on from their front lawns.

The city of Downey itself has an interesting history: Home to the world’s oldest McDonald’s in operation — and the site of the first Taco Bell (which is now a museum at Taco Bell headquarters in Irvine) — Downey was also the birthplace of the Apollo Space Program.

The city was essentially modernized from an orange-grove farm town into a missile factory town by Boeing during World War II. The space program was just a continuation of that. In the 1980s, it began to transition into one of the most diverse areas of Los Angeles County thanks in part to Ronald Reagan’s 1986 amnesty bill, which naturalized people like my parents and allowed them to come out of the shadows to find higher-paying careers.

Today, many of Downey’s fanciest restaurants are Latin American or are owned by Latinos. Spanish is the predominant language of people decked out in Prada, Gucci and Burberry. It is home to fantastically wealthy families, including the Saavedras, who own the Tapatio hot sauce company; the Flores family, who live in a giant estate rumored to be modeled after the Palace of Versailles; and the Infantes, Mexican musical and cinematic royalty.

But there are also the Galindos.

When my family moved here in the mid-90s, after years living in different spots in Southeast L.A. County’s poorer neighborhoods, Downey was considered a mostly white, upper-middle-class oasis. It’s still upper-middle-class, but the population is about 74 percent Hispanic, and the place where the space program was conceived is now a 24-Hour Fitness, adjacent to a luxury movie theater that shows most blockbuster films with Spanish subtitles.

My immigrant parents scraped and earned and brought us to South Downey in 1995 to keep their five kids out of gangs. The schools in Downey were known for their prowess and the Downey Police for their severity. Back then, we were the only Mexicans on my block, living next to the only Cuban and only Asian-American families for miles.

As early as 1988, the city’s edges became a gateway for working class Latinos seeking to spend their hard-earned savings on a first home in a neighborhood with access to great public schools. The Downey Unified school district consistently ranks in the top 20 safest districts of L.A. County. For parents like mine, who had bought into education as the key to a life of American exceptionalism, Downey was a beacon.

South Downey was considered the poor part of town — which Beverly Hills also has, by the way — because it’s right on the border of less affluent cities like Lynwood, South Gate and Paramount. And when we first moved there, it was, frankly, boring, and hard to stay out of trouble.

There were fights, drug abuse, police and gun violence. And at times, it appeared each one of us five kids would squander the opportunities our parents were working hard to shape for us. But my family evolved, and South Downey has evolved with it.

This summer, Downey had what one 60-year resident described as the “largest display of civil disobedience in a generation.” It was some 300, mostly young people of color led by a 19-year-old college freshman named Donald Arrington, marching for Black Lives Matter.

Property value here has also boomed as real-estate prices have ballooned to the million-dollar range, according to Sergio Orzynski, a realtor with Keller Williams. A house on the very end of my block just sold for about $700,000 and a few blocks over, there were multiple million-dollar listings.

“I mean, you got all these rich Latino families here, all these mini mansions everywhere. So if you’re first generation or second or even a recent immigrant, that’s where your American dream is,” he said. “It’s to one day work so hard that you can live in these large spaces in clean neighborhoods that have these great schools.”

That’s the paradoxical part about Downey: It shows that Latinos can live a life of relative wealth and influence in the United States without having to give up ties to their respective and diverse Latin American cultures. But it also exemplifies a distinctly American idea: the possibility of upward mobility across generations.

The phrases “Mexican Beverly Hills” and “Latino Beverly Hills” aren’t great for many reasons, especially because they center the success of people of color through a white lens (Beverly Hills being one of many elite American suburbs that was originally planned as an all-white community). But the truth is, this is the name Southeast L.A.’s Latin American community created, and it signifies an important ideal.

It doesn’t hurt that Downey is glittering with mansions, lush gardens and a Portos, the lauded Cuban bakery that always has a massive line out the door and regularly features catty verbal altercations when someone tries to cut.

Elon Musk even considered opening his factory here before Toyota wooed him to Silicon Valley. The long flirtation with South Downey ended with Mr. Musk penning a public letter titled “Downey is Great.” (It’s true that there are Tesla charging stations all around town.)

My parents don’t own a Tesla or mansion. But they do live in a large compound that houses three generations of Galindos. So there are resources and we band them together, a multigenerational approach to long-term stability that has helped us survive the worst of the coronavirus recession.

The whole neighborhood is like that now. Generations of families, working together to put down roots.

Erick Galindo writes about life in Los Angeles for LAist and other publications. June Canedo is a photographer based in Los Angeles, Calif.

Anthony Yarde vs Lyndon Arthur: What time is the fight and how can I watch it on TV or live stream?