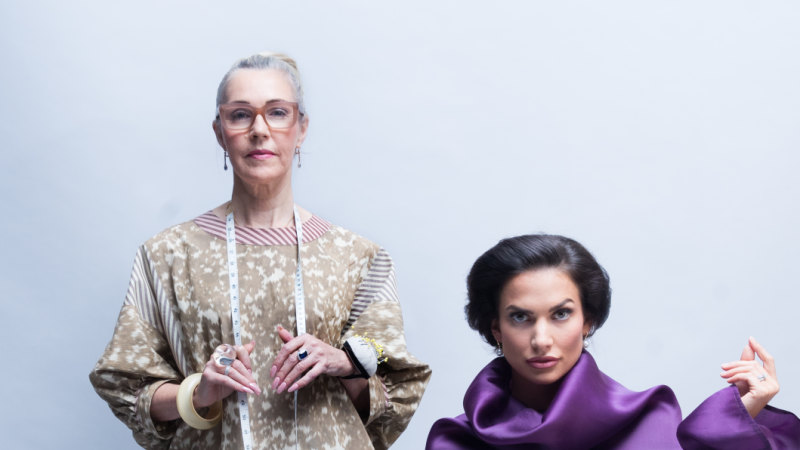 The handmade tale: Why more women are spending big on one-off clothes

Down there, they queue for the fitting rooms and cash registers with arm-loads and arm-loads. Ka-ching, ka-ching.

Up here, the elegant couturiere hosts seasonal soirees, intimate affairs with cocktails and a couple of chatty models to drift about in her latest collection of handcrafted womenswear.

Guests are a mix of old chums-cum-clients, a smattering of media and arty types, and a category of guests that, Baker says, has ‘‘exploded’’ in the past couple of years: couture-curious newbies.

Many of the latter have grown up and out of that reactive, trend-driven Instagram-influenced fashion jungle down the street. Baker’s clients are well beyond their foolish fashionable youth, now mostly in their late 20s, 30s, and on up through un certain âge. 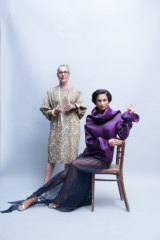 Designer Kara Baker with one of her couture creations worn by model Shoona Davies. Jewellery by Kozminsky.Credit:Simon Schluter

All are acquainted, by word of mouth, with Baker’s atypical way with fashion: ‘‘Perfectly fitted, perfectly proportioned, strongly feminine but not girly,’’ she says. ‘‘I’m probably a bit old-fashioned, driven by silhouettes more than trends; silhouettes that are flattering to the figure. If you want the latest look and really want to show off your figure in a very sexualised way, well, you won’t be interested in what I do.’’

At her soirees, Baker’s like-minded devotees lounge on her just-so curation of modern and vintage decor surrounded by her objets d’art and paintings as quirky and timeless as her couture.

Eventually, they all gravitate to a rack of Baker’s samples propped on one side of the stylish room, to stroke the fabrics, feel the silky slip or tweedy texture of them on their skin, inspect their pernickety hand-stitched interiors.

And to consider their options: $600 for a unique, made-to-their-precise-measurements blouse, $700 to $900 for a dress, perhaps $1600 for a jacket or coat exquisitely tailored to their hips, their bosom, their armpits, elbows and a dozen more physical touch-points.

Baker’s prices are at the lower end of the couture economy, partly because the high-end fabrics she offers are often rare bolts of never-used vintage ‘‘dead stock’’. (Hence the ‘‘quirk’’ in her couture’s beauty.)

For many wage-earning women, some tricky fashion maths is required to justify that. So most begin with "cost per wear", an equation that can justify almost any price. A Kara Baker frock that costs 10 times more than a fast-fashion alternative from a rack down the road, for example, is likely to be worn 100 times or more in its decade-long lifespan while, statistically, the cheapie – and its 20 or 30 replacements in the same period – is likely to be discarded after just a few wears. Or less.

Divide use into price, and you’ve got your cost per wear.

For another fashion equation, useful to some, Baker’s couture is also roughly half the price of many off-the-peg garments from the swank global designer brand boutiques strung along Collins Street.

Back at Baker’s atelier, when – or if – her guests do pick a design to order, a slow process begins: measurements are taken, a pattern made, often a toile cut and sewn, fitting and final adjustments done, fabric cut, canvas cut and sewn in to thicken and stabilise tailored panels, seams stitched and delicately Frenched by hand to disappear, edges and hemlines hand-sewn and anchored with tape to counter the natural twist of bias-cut fabrics, buttons hand-covered, loops and details hand-embroidered, a final fitting, last adjustments. Joy.

And in a decade or three or more, another precious couture garment – an heirloom of sorts – will still be treasured and worn by the woman who instigated the process, or perhaps her daughter.

It’s all tres Parisienne or, how you might imagine a French couture house to operate in the 1950s or '60s before the global fashion industry bloated, lost its focus on flattery and quality, got fast and nasty.

Bespoke’s not going to solve all our problems, but I like to think it’s part of the mosaic of solutions toward a sustainable fashion future.

"We often talk about how we’ve lost connection with our clothes," says Clare Press, sustainability editor-at-large for Vogue Australia and author of Wardrobe Crisis and Rise and Resist.

"We buy so much. There’s that buzz when you buy something new but it doesn’t last. It doesn’t make sense that our clothes are so … disposable. When the conversation’s about a more sustainable fashion future, one of the things we’re going to do is look back and appreciate the way things used to be made.

"The idea of slowly crafted, extremely beautiful made-to-measure clothes gets us back to the magic of fashion but it also addresses moral questions like sustainability and that disregard for human rights we’ve found in some parts of the industry. Bespoke’s not going to solve all our problems, but I like to think it’s part of the mosaic of solutions toward a sustainable, ethical fashion future."

The global swell of disgust against some aspects of fashion could be partly responsible for Baker’s and other couturiers’ uptick in business in recent years. 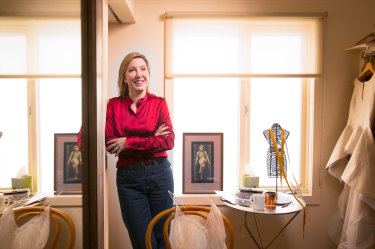 "In that new moral fashion landscape I think women are giving themselves permission to buy more beautiful, expensive (fashions): like, one Julie Goodwin instead of 10 Zaras." 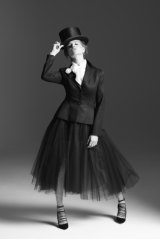 She plucks proof out of her archive rack, an impossibly chic Balenciaga-esque dark wool jacket, fully tailored with a dozen canvas-backed gore panels cut and hand-stitched to a tilted silhouette and deeply kinked waistline for maximum flattery on the front, back and profile views.

Goodwin will design something comparable but unique in a $3000 cost range and in 20 or 30 years, with careful wardrobing, a few alterations for weight fluctuation perhaps, and a couple of replacements of its silk lining, her client will have buttoned herself into that beauty and strutted into the world, glamorous as a modern Greta Garbo, a thousand times or more.

Goodwin’s business is understandably booming. Wealthy professionals are her core clientele, but she also has several who save to buy one glorious piece every year or two, gradually building their classic bespoke wardrobe coat ($5000) by jacket ($2000 to $3000) by blouse ($700). 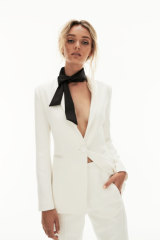 "Racing season used to be my busiest," she says.

"I’d make all my money for the rest of the year in that one season. Now it’s consistent all year and my [clientele] is getting younger and sharper. It’s fantastic."

Goodwin’s good fortune is likely to continue unless the global industry thoroughly corrects itself. At the moment, it’s still pickling in its own horror statistics: arguably the second most polluting industry on the planet, contributing to 20 per cent of global water wastage, 10 per cent of climate-changing carbon emissions and a mixed bag of human rights abuses in mostly developing countries from Bangladesh to Uzbekistan.

Fashion producers and sellers from fast-cheap-trendy global chains to one-craftsman ateliers are frantically scrubbing what sins they can out of their business models and supply chains and casting about for ways to divert millions of tonnes of near-new clothing from incinerators and landfill dumps into re-sale and recycling systems.

Morality is fashion’s new black and in the complex suite of solutions proposed to fix a sick industry, couture is one tiny, terribly elegant, blip.

"There’s just so much crap out there," says veteran couturier Sam Oglialoro, sadly. "You buy it, maybe you buy it online, it doesn’t fit, you wear it twice, you throw it away." 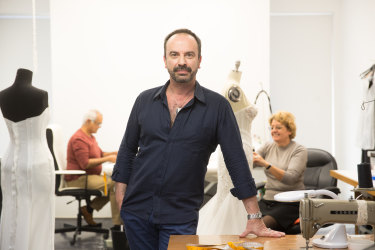 He’s aghast at what women will endure now, what fashion has become outside of his elite orbit; fashion bought for a quick buzz, a cheap thrill. 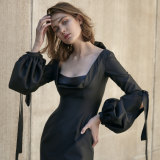 "You cry! Only education will change things," he says, gesturing along the lush avenue of couture racked in his sleek South Yarra salon.

"They need to understand the power of couture and the reasons behind the cost."

After 38 years at the top of his profession, Oglialoro has accumulated a breathtakingly beautiful archive, ranked along his salon walls in froths of tulle, cascades of silk satin and glints of embroidery, sequins and beading.

It’s quite a spectacle. And though it’s not his entire repertoire – he also crafts summer shorts and singlets, corporate suits and daywear, coats and heavenly cocktail frocklets for his expanding clientele – it is these marvellous, once-in-a-lifetime masterpieces, he says, that hook couture newbies into a habit of made-to-measure. 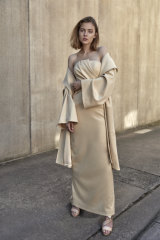 "That’s when they first understand it; the control they have over the process, the feeling of something that fits like a glove, something that’s unique, that’s perfect for the way they live their life, that makes them feel a million dollars."

Oglialoro meets lofty expectations with his typically complex and exhaustive process of measurement (up to 30 touch-points), micro-questions (how do they they sit, stand, walk, work, reach up, bend down, ride a bike…), and brutal honesty.

"Especially, I have to be very honest," he says. "Or there’s no point."

Honest eyes are vital couture tools. If a client desires a style, for example, that sits awry with her symmetry, proportions or form, Oglialoro delivers the truth without fuss.

Oglialoro is a renowned perfectionist and consequently, operates at the top of the couture economy.

He uses fabrics so rare and fine for example, $1000 a metre is not uncommon. And his ultimate couture prices are – apparently – so expensive he only smiles ruefully with a finger to his lips, ‘‘Shhhh’’, when I ask him to be specific.

But he still believes couture can be accessible to most women who genuinely love fashion, not for the short-lived thrills of a hundred trendy purchases, but for the joy of one garment dreamed, designed and beautifully crafted especially for them.

"You have to love fashion if you’re going to spend that much on a garment," he says.