Home » Fashion » Something to Really Talk About 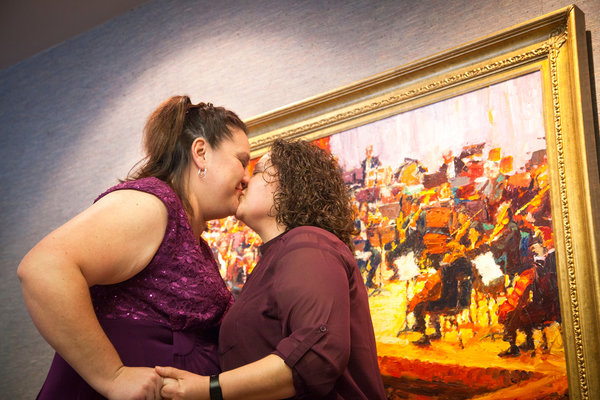 Something to Really Talk About

Before they became lovers, Stephanie Segura and Becca Sicairos were nearly inseparable, friends with opposite outlooks and personalities, like Bert and Ernie from “Sesame Street,” Ms. Segura laughs, “but without the thick eyebrows.”

They met in 2003 at their jobs at the Salt Lake City Costco, where Ms. Segura worked as a floor supervisor and Ms. Sicairos worked in the membership department. Shifts together preceded evening outings, several days each week, at restaurants; at Ms. Segura’s home in Taylorsville, Utah, watching reruns of “Friends”; or at a karaoke bar where Ms. Segura would belt out rousing renditions of Bonnie Raitt’s “Something to Talk About.”

Despite the amount of time the two women spent hanging out, there was one thing they could not bring themselves to talk about: their feelings of attraction.

As her previous same-sex relationship nose-dived, Ms. Segura, who is now 39, leaned hard on Ms. Sicairos, 32, for support, and Ms. Sicairos, in turn, shared tales about her unappealing dates with men. Ms. Segura was in doubt about whether the attraction was mutual.

Finally, on Dec. 28, 2005, Ms. Segura summoned the courage to tap out a text message: “I am having feelings I probably should not have for you.” But Ms. Sicairos recalled the language as more unclear, “like, ‘You know what I’m trying to say and if you think about it for a while, you’ll know.’ ”

In retrospect, the two understood the underlying issue but were unprepared to address it.

In the end, the friendship survived, and a loving relationship blossomed and thrived, leading to the births of two children and then, on Dec. 27, their marriage in a government building in Salt Lake City, in a state where same-sex unions had never before been allowed. Ms. Segura and Ms. Sicairos were among the approximately 1,300 same-sex couples to wed in a frenzied rush after Dec. 20, when a Federal District Court judge found Utah’s voter-approved ban on same-sex marriages unconstitutional and barred the state from blocking them.

“We never thought this day would happen,” Ms. Segura said after their wedding, “here, in our home state of Utah.”

As for those marriages that have already taken place, a legal tug of war quickly ensued between the state and the White House. On Wednesday, the governor’s office announced that it would not recognize any of those marriages while it presses its case. But Friday, shortly before press time, the Obama administration countered that the federal government would indeed recognize them as lawful, despite the state’s refusal to do so.

All of this seemed quite unimaginable back in 2005, a time when Ms. Segura and Ms. Sicairos were trying to figure out whether they would be in a relationship of any kind, never mind a romantic one, and were sorting out their feelings as they went along. 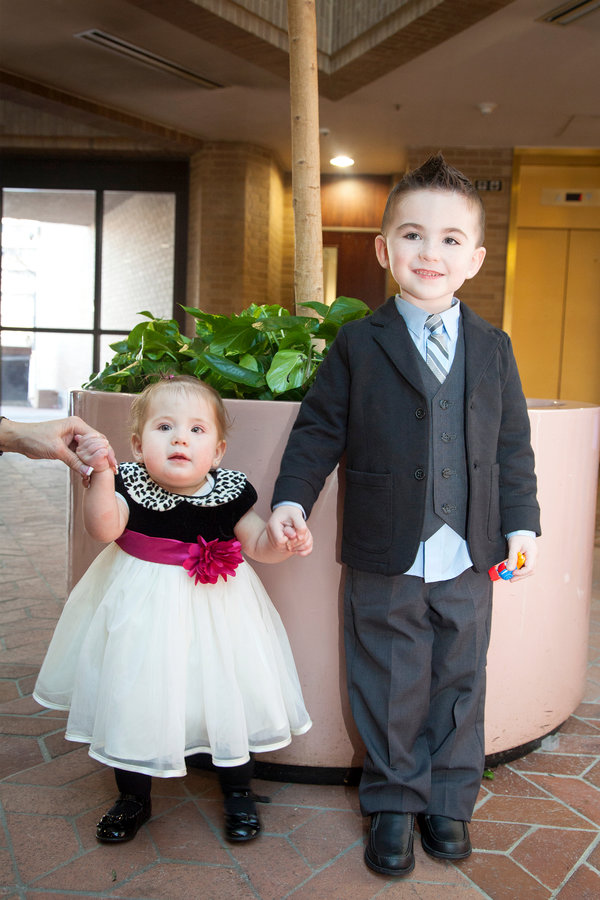 If Ms. Sicairos’s “it’s my fault” text caused confusion for Ms. Segura, she was feeling plenty of it herself. She, too, did not want to lose her closest pal, and criticized herself for being “overly flirtatious.”

There were other reasons for caution. Unlike Ms. Segura, who grew up a tomboy and knew she was attracted to girls before she turned 13, Ms. Sicairos had never been in a relationship with a woman. She worried how the tight-knit Sicairos family might react. (Her mother, Cheryl Sicairos, who also works at a Costco warehouse, had been friends with Ms. Segura since the mid-1990s.) And there was the matter of being co-workers.

In Costco’s small marketing department office the next day, the two felt excruciating embarrassment. The day dragged without the usual banter. Finally, Ms. Segura invited Ms. Sicairos to a birthday party for her father, Joe Segura, a retired construction worker.

Neither enjoyed it, nor spoke a word to each other. Afterward, Ms. Segura drove Ms. Sicairos to her family’s home, where she was then living. It was a ride of eerie silence.

“I didn’t dare speak,” the voluble Ms. Segura said. “I was so nervous.”

The reserved Ms. Sicairos had expected that Ms. Segura, always “gutsy,” direct and quick to express her feelings, would initiate a talk. So Ms. Sicairos braced herself and placed a phone call — no more text messages — to say that “for me, this was serious; it wasn’t a fling.”

Discussions lasting hours ensued, including their “first date” — chatting in the cab of Ms. Segura’s truck in the Home Depot parking lot near Costco, so co-workers would not spy them.

On their second date, on New Year’s Eve 2005, they stole a surreptitious kiss, their first, while on a trip with the extended Sicairos clan to a casino resort in West Wendover, Nev. Ms. Sicairos’s family members were unaware of the budding relationship, or Ms. Sicairos’s sexual orientation, so the couple dared not hold hands, let alone kiss in front of them.

As a couple, they reveled in silliness. On a trip a few years later to the Las Vegas Strip, they caused a spectacle with an ill-conceived piggyback ride, while they were tipsy, that left them in torn clothes and in tears of laughter. On a vacation in the Ozarks in Missouri, they won T-shirts for knocking back shots containing minnows. They found joy on a cruise of the Mexican Riviera, not knowing it was for “old folks,” seeing hilarity in dining nightly with a man who wore ties depicting Goofy and with his wife, who drank milk with dinner.

Ms. Sicairos said she loves that Ms. Segura is animated and affectionate and “so lighthearted, always walking around singing and finding funny things in everyday life.” Ms. Segura, for her part, called Ms. Sicairos “a sweetheart, sincere, caring and so loving to our kids.”

Ms. Segura said that the seriousness of the relationship pointed to a desire “to have a family and not just be a couple.” Indeed, they identify first as mothers and members of a huge extended family. Portraits of their children — Brayden, 3, and Ellie, 1 — as well as nephews, nieces and dozens of relatives, line nearly every wall of their home. As often as possible in warmer months, they haul their trailer to the outdoors, to places like Soapstone Basin in the Uinta Mountains.

As parents, the couple have encountered difficulties in Utah. Before conceiving their children using a sperm bank, they said it irked them that the state required a counselor there to conduct a lengthy evaluation to determine their “fitness” to be parents. Similarly, Ms. Segura, who is not the biological mother of Brayden or Ellie, is not listed on the birth certificate of either child and cannot adopt them.

In the face of obstacles, they say, their vast families have helped to keep them strong. Weekly Sunday dinners at one of their parents’ homes are the norm, and they rely on relatives for help with babysitting.

“We’ve always thought of Stephanie as our in-law,” said Diana Sicairos, a sister. Their brother, Marcus Sicairos, marveled at how much Ms. Segura had influenced his sister, helping to make her “a little braver.” 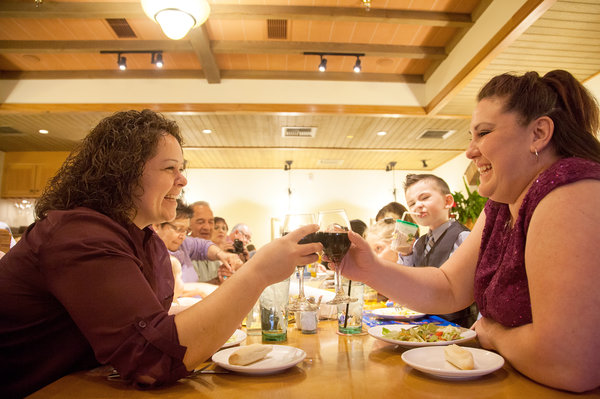 So when baby Ellie was hospitalized in January 2013 — a 12-day ordeal when Ellie could not eat because of an internal infection and nearly died — a surprising side of Ms. Sicairos emerged: bold yet calm, fearless yet rational.

Describing that episode, Ms. Sicairos gasped midsentence and quietly cried. Ms. Segura quickly gave her shoulder a caress and finished the thought. “We’re very, very thankful for Ellie,” she said. “We were so close to losing her, and now she’s our little chunky monkey.”

The couple are fully aware of the unaccepting attitudes toward gay people exhibited by many in conservative-leaning Utah. Still, both insist they had never encountered “negativity” in face-to-face encounters. Attitudes are changing, with “more open-mindedness,” Ms. Sicairos said.

“In the eight years we’ve been together,” she continued, “our world is a totally and completely different place”

Ms. Segura, who was raised Roman Catholic, and Ms. Sicairos, who is not religious, have assiduously surrounded themselves with people who support them.

But as for those who oppose the notion of their relationship, Ms. Segura has little patience.

“Shame on you,” Ms. Segura said of those state politicians and leaders of the Church of Jesus Christ of Latter-day Saints who are pushing the appeal to keep the ban on same-sex marriages in place. “We pay taxes. We’re just married, that’s it. It has no effect on anybody.”

Coincidentally, just two days before the federal judge’s ruling calling the ban on same-sex marriage unconstitutional, the couple talked about the possibility of moving to another state to marry. Marriage was a practical issue, not a political statement. “Kids change everything,” Ms. Segura said, speaking of their motivation. But they had no interest in traveling to get a marriage certificate with no legal effect in Utah, and they also knew they could never replicate their family support elsewhere.

In fact, when Ms. Segura heard the news about the ruling from a friend while pumping gas at Costco after work, she initially thought it was a joke. Then she frantically called Ms. Sicairos, who was equally incredulous, to ask her hand in marriage, in Utah.

The Rev. Christopher T. Scuderi of the Universal Heart Ministry, led their Dec. 27 ceremony in the alcove off the lobby of the Salt Lake County Government Center, surrounded by boisterous relatives and their children. Family members stood in a tight semicircle around the couple, straining to hear the minister and jockeying for position to capture images of the couple on cellphones or tablet computers.

“We know we’re loved,” Ms. Segura said of her family. “That is so important.”

Bosco Kayembe, Ms. Sicairos’s boss, who identifies himself as a Mormon, surprised the couple by attending their wedding. A towering man born in Belgium, he knows that plenty of gay men and lesbians work at Costco, and he said he believed that the ruling allowing these marriages was just.

After the Supreme Court decision, Ms. Segura expressed disappointment. Even if their marriage is voided on the state level, she said, “it won’t change anything in our relationship, except our marital status.”

“We consider ourselves married, and we have two kids,” she added, “and they can’t take that away from us.”

Who is Gino D’Acampo, is the Italian TV chef married and was he jailed for robbing Paul Young?
World News