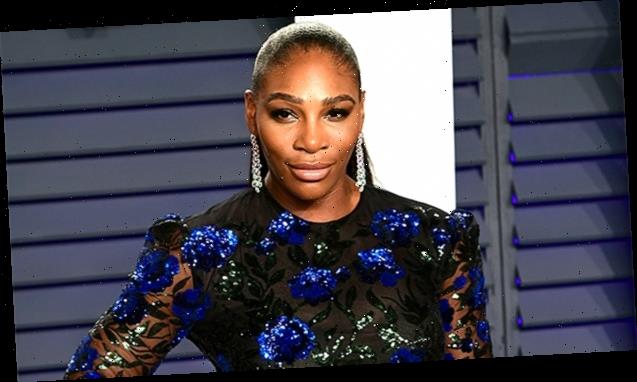 Serena Williams is sizzling hot in new behind-the-scenes photos (seen here) from her latest Stuart Weitzman photoshoot! The tennis icon, 39, who was named the global spokeswoman for the celeb-obsessed footwear brand in May, showed off her incredible curves in a belted black bodysuit and red leather boots. Serena posed with her hair pulled back in a side-parted long, blonde ponytail.

“These boots are made for walking,” she wrote across three separate Instagram posts on Monday, October 26. The BTS photos appear to show an outdoor makeshift backdrop due to the COVID-19 pandemic. Nonetheless, we have a feeling the campaign photos turned out better than expected!

Serena stepped onto the white photoshoot backdrop in a pair of Stuart Weitzman’s “The Parton Boot,” which retail for $795. The crocodile pointed leather boots (in Chile red) have a 4-inch heel and fall just below the kneecap. Additionally, the eye-catching boots were crafted by the brand’s artisans in Spain for maximum comfort. They’re also available in black.

Serena’s straight ponytail was courtesy of her go-to hairstylist, Angela Meadows Salon. She’s worked with the Miami-based hair and wig expert on a number of other projects, outside of her Stuart Weitzman campaign. Natasha Gross was responsible for Serena’s glam, which included neutral, soft tones. The shoot was styled by Gabriella Karefa-Johnson, fashion director for Garage magazine. She most recently styled Kendall Jenner, who covered the magazine in February. Jenner is also part of the Stuart Weitzman family, as well as Gigi Hadid and Willow Smith.

It’s unclear if Serena’s BTS photos were shot recently, or if she was holding onto them for a rainy day. We say that because the 23-time Grand Slam winner shared similar photos with a near identical background in October, that showed her on set of a shoot with the brand.

In collaboration with Stuart Weitzman, Serena’s hoping to create change through the brand’s partnership with Vital Voices — a non-profit that that works with women leaders in the areas of economic empowerment, politics and and human rights.

“I hope through this campaign and Stuart Weitzman’s partnership with @VitalVoices, we can share a message of hope and optimism, and celebrate women and their ability to lift up their communities,” Serena wrote on Instagram last October.

In other Serena news, she recently discussed her favorite beauty products in a cover interview with British Vogue, where she recommended a firming chin and jaw mask by Sarah Chapman. The athlete even hinted that it was her close friend Meghan Markle who out her on to the miracle mask. Now, Serena’s obsessed with the beauty product, which you can purchase here!