Home » Fashion » Say hello to SS19: our fashion editor delivers her style forecast for the season 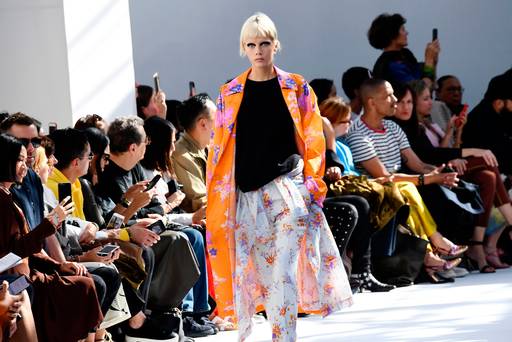 Say hello to SS19: our fashion editor delivers her style forecast for the season

Sartorial dressing continues in a big way in SS19 and the incoming fashion season will be remembered as being “a very colourful one with lots of fun, feminine shapes and the addition of volume which is something we have not seen for some time,” reports Shelly Corkery, Fashion Director of the Brown Thomas Group.

“There is a very diverse feeling this season – there is something for everyone and the key trends include Utilitarian which is very streetwear, Minimalism which is very clean and sophisticated, and All Dolled Up which is very embellished. Another trend is to trim in a very couture way using feathers, lace, sequins, beads and raw edges,” says Shelly.

After attending all the designer shows in Milan, Paris, London and New York, the Valentino collection with its mix of colour and pleated pieces in shades of burgundy and cognac (above) topped Shelly’s favourites list, followed by Dries Van Noten for his embellishment and strong skirts with fake volume at the side, the London-Irish designer, Richard Quinn, whose latest collection was “superb with layers of stunning prints – including animal, florals and polka dots – an amazing mix of volumes in his dress, couture elements of femininity with wowness and glamour, glamour, glamour,” says Shelly.

The dress is king and a lot of shapes fall away from the body, as opposed to bodycon which ruled the roost for so long in women’s affections. There’s oceans of scope in the 1960s trend where silhouettes include printed baby doll dresses, double-breasted swing coats and Shelly reports “a nostalgic ambience” from Miuccia Prada who delivered a strong ’60s vibe but “with a modern attitude.” Watch out for the sporty ’60s surf girl invading our affections with printed neoprene tops, bicycle shorts and tie dye skirts in vibrant reds and pinks.

The cycling short trend is of limited appeal to ‘real women’ and I think most will sidestep its Kim Kardashian look-at-me vibe for a more tailored bermuda short in a shiny satin like Prada offered. The addition of knee-high pop socks are a take-it-or-leave-it moment.

One name that won’t go away on the fashion landscape is Phoebe Philo whose shock exit from Céline a year ago – after a 10-year tenure as creative director – came as bombshell to her devotees, known as ‘Philophiles’.

Shelly says they have been looking at brands to replace the Philo aesthetic “and this season we picked up Jil Sander (a minimalist German brand), we have developed our Loewe offering and these are the two brands that our customers will be looking to instead.

“While Hedi Slimane will have fans for his structured tailoring compared to Phoebe’s ethos of oversized femininity falling away from the body in a more relaxed way, the importance of Phoebe cannot be underestimated and her minimalist legacy at Céline shapes the future of the Minimalist trend,” says Shelly.

The Nomadic Cool trend delivers “a hippy modernism and a new age Boho and draws from archive scarf prints, decorative Paisleys and memorable patchworks,” says Shelly, who namechecks Natacha Ramsay-Levi, creative director at Chloé, who took the scarf print successfully across her collection.

Running through the ‘new girls’ this term, there’s Kenzo, Kitri which comes from a small team of London creatives, MM6 which is part of the Maison Margiela family, and Stine Goya – a Copenhagen-based label known for its playfulness. Rotate comes from two Danish influencers, while Comme des Garçons ‘Girl’ mirrors the architectural appeal of Rei Kawakubo’s respected main collection. Samsøe & Samsøe takes its inspiration from Copenhagen street style, Temperley London is the ultimately feminine label from Alice Temperley, and lovers of fashionable sportswear and activewear will be charmed by the arrival in store of The Upside, a Sydney-based label founded by Jodhi Meares and which so many Irish girls have missed since returning from their Antipodean adventures.

On the shoe front, denim has infiltrated footwear bigtime with acid wash finishes, and Balenciaga crossed it successfully with the mules trend. Feathers are firmly ensconced as the must-have trim and sneakers continue to be an important category. The chunky sole has been given a feminine edge, like in Versace (below) moving it firmly out of the traditional ‘Dad’ category.

Take a cue from Victoria Beckham whose split at the front of trouser hemlines is finding favour, especially with shoe fiends, while Stella McCartney did a zip-front trouser end version.