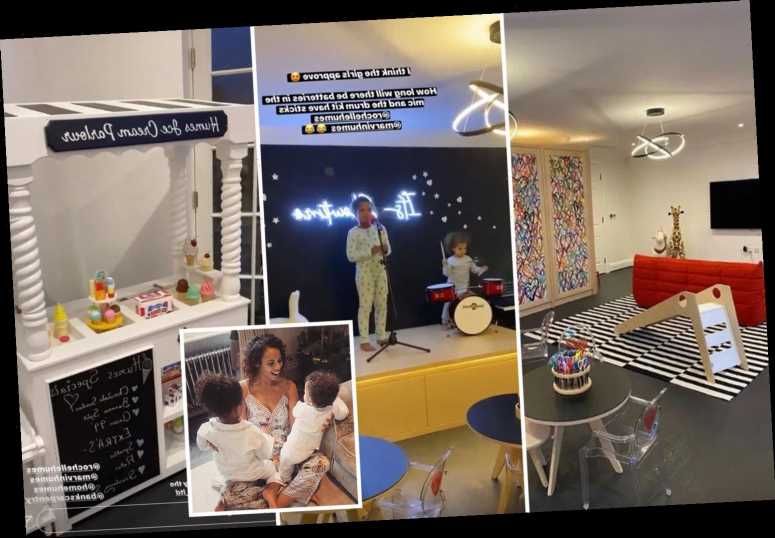 ROCHELLE Humes has shown off her two daughters’ incredible new playroom, which comes complete with its own stage.

The TV host, 31, shares her beautiful home with JLS husband Marvin, 35, and decked out the room yesterday for Alaia-Mai, seven, and Valentina Raine, three. 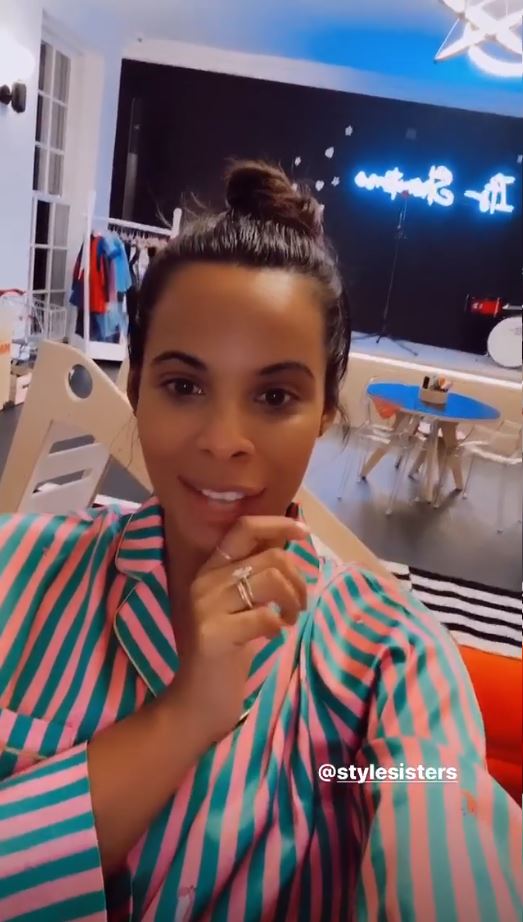 The finished playroom includes floor-to-ceiling rainbow-coloured cupboards for toys, a giant giraffe, a huge dolls house, and an enviable collection of board games.

It even has a giant slide and a fake kitchen, as well as a shop which has its own electronic till for Alaia-Mai and Valentina to play with.

And unsurprisingly given their parents shot to fame as singers, the young girls even have their own performance stage with microphones and a chic drum kit.

One of the walls in the room is also magnetic, so the privileged youngsters can display their pictures with star magnets. 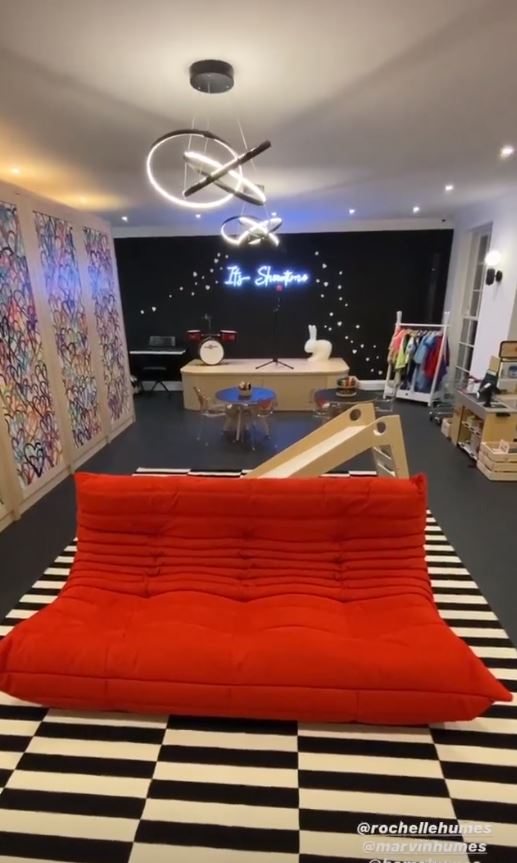 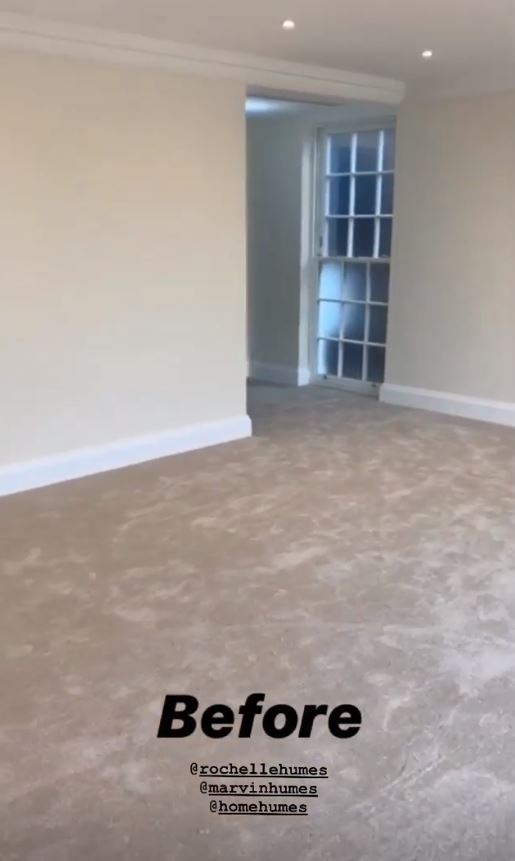 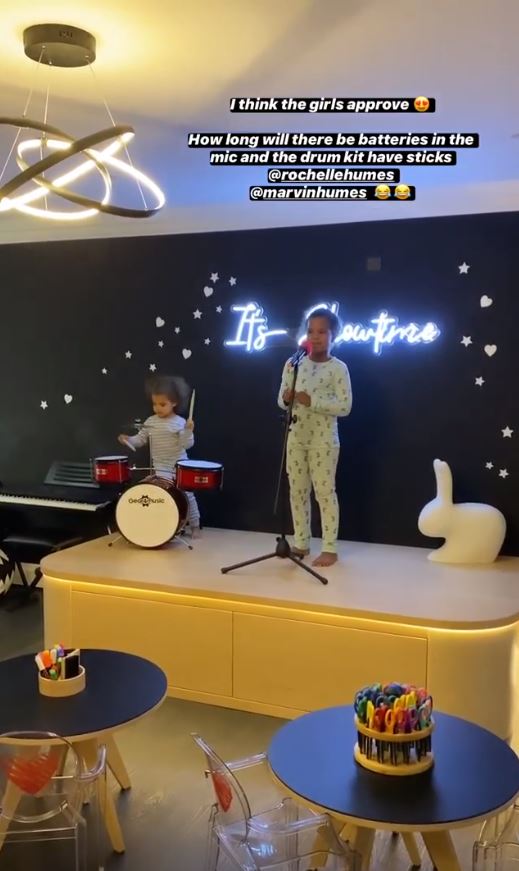 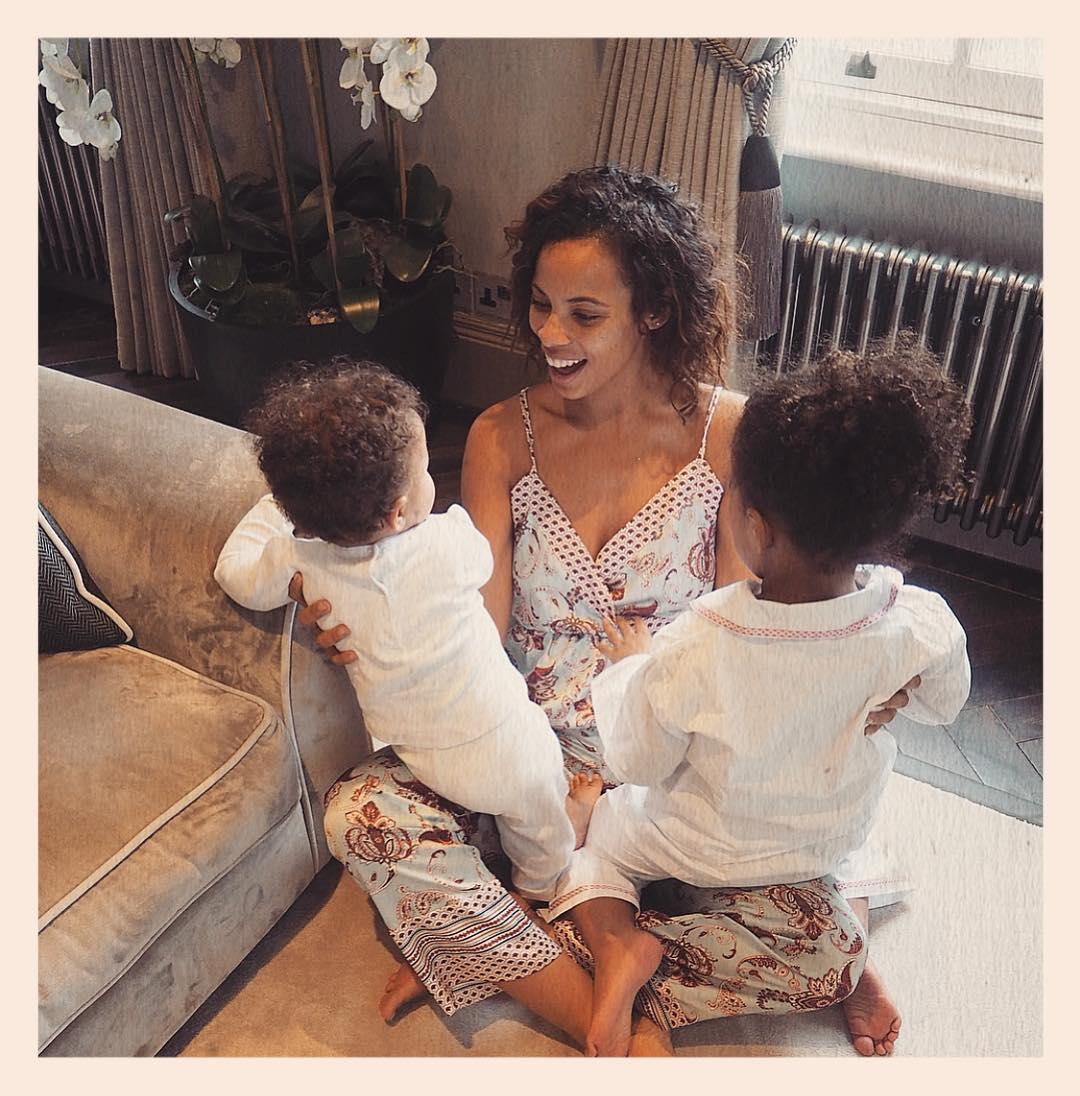 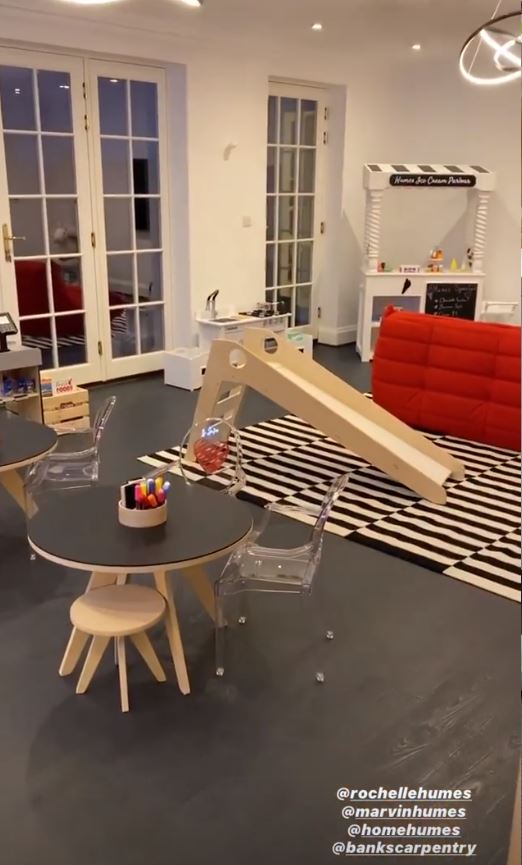 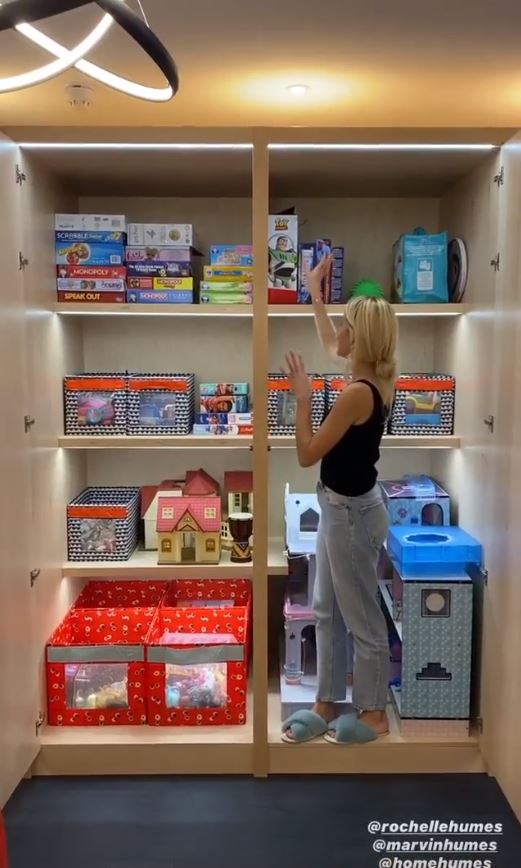 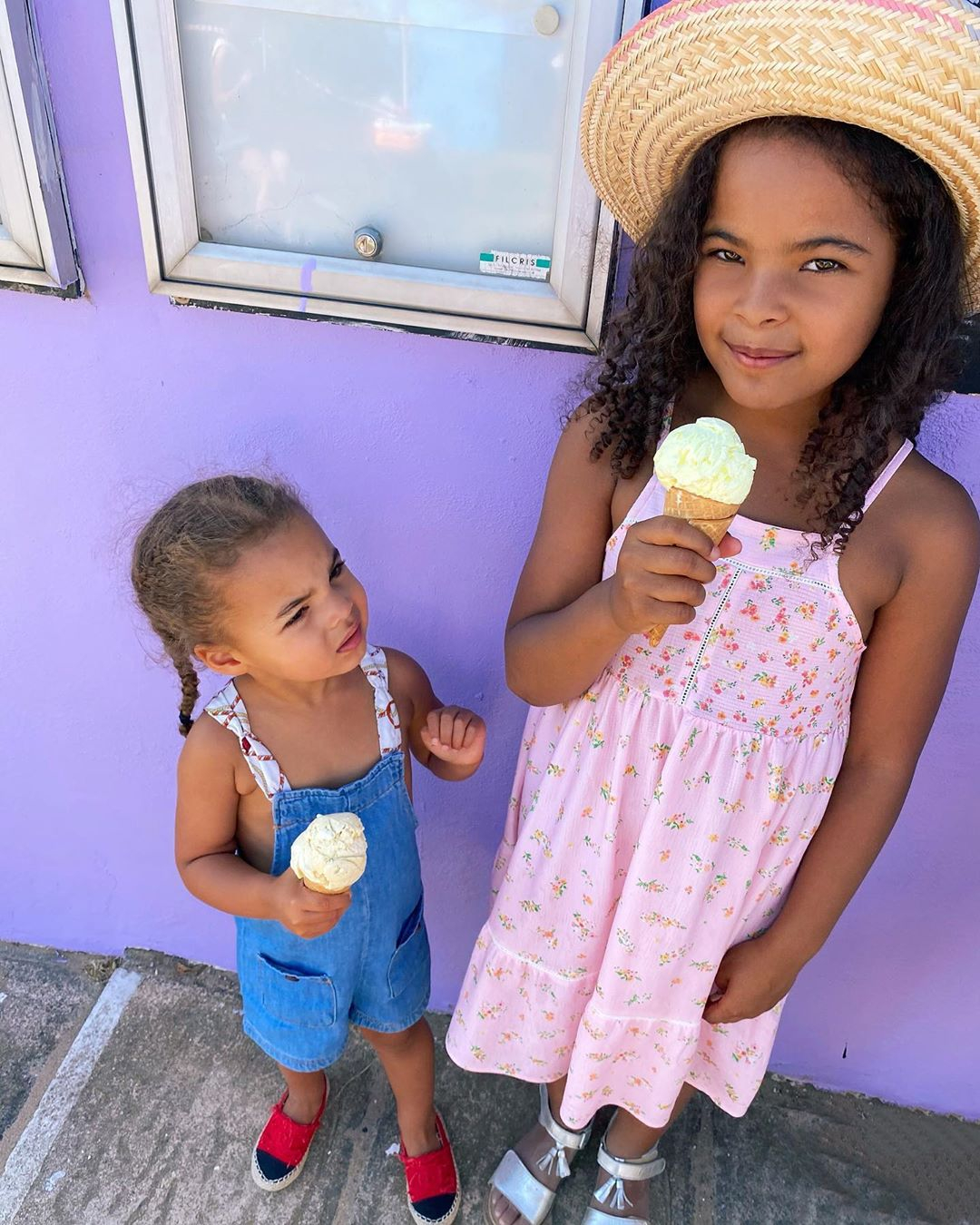 Rochelle, who is almost 28 weeks pregnant with a baby boy, seemed delighted with the finished result.

She said on Instagram: “We’ve obviously just moved so everything has been chaotic and completely unorganised.

“The past three months we have been coming up with a fun scheme for a playroom for the girls and the boy that’s my oven.

She later joked after a few hours with the stage up and running: “A word to the wise. Don’t buy your kids a drum kit…” 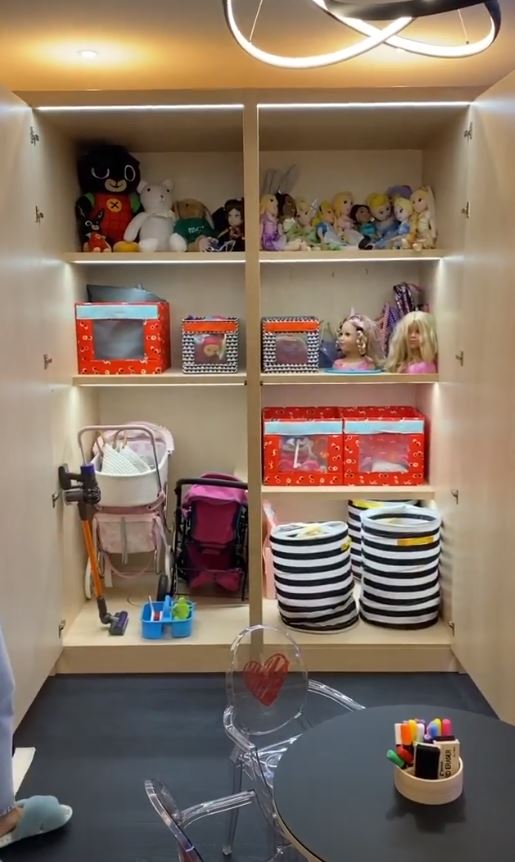 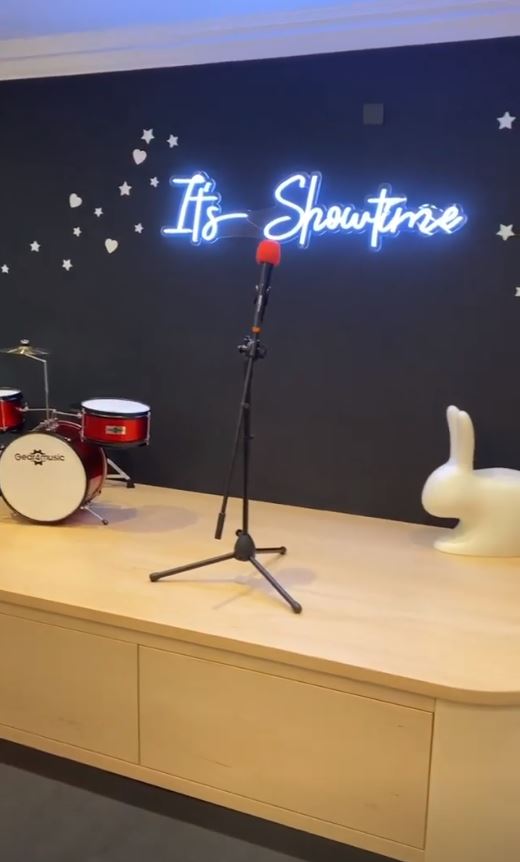 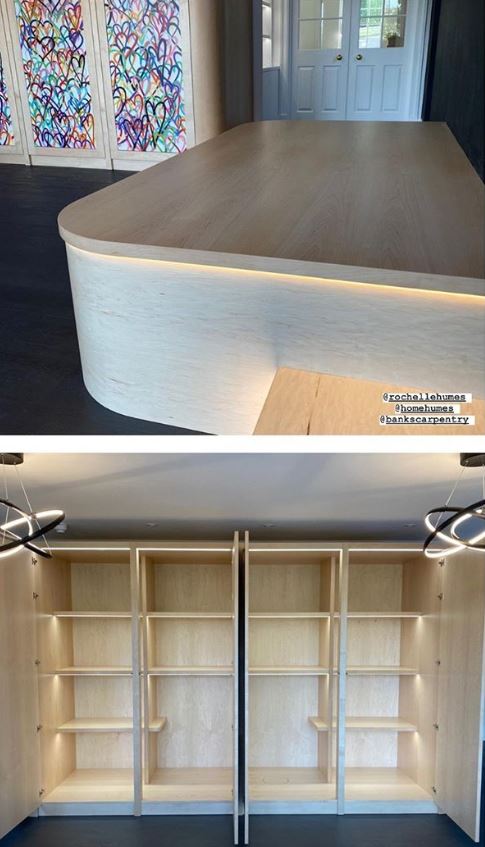 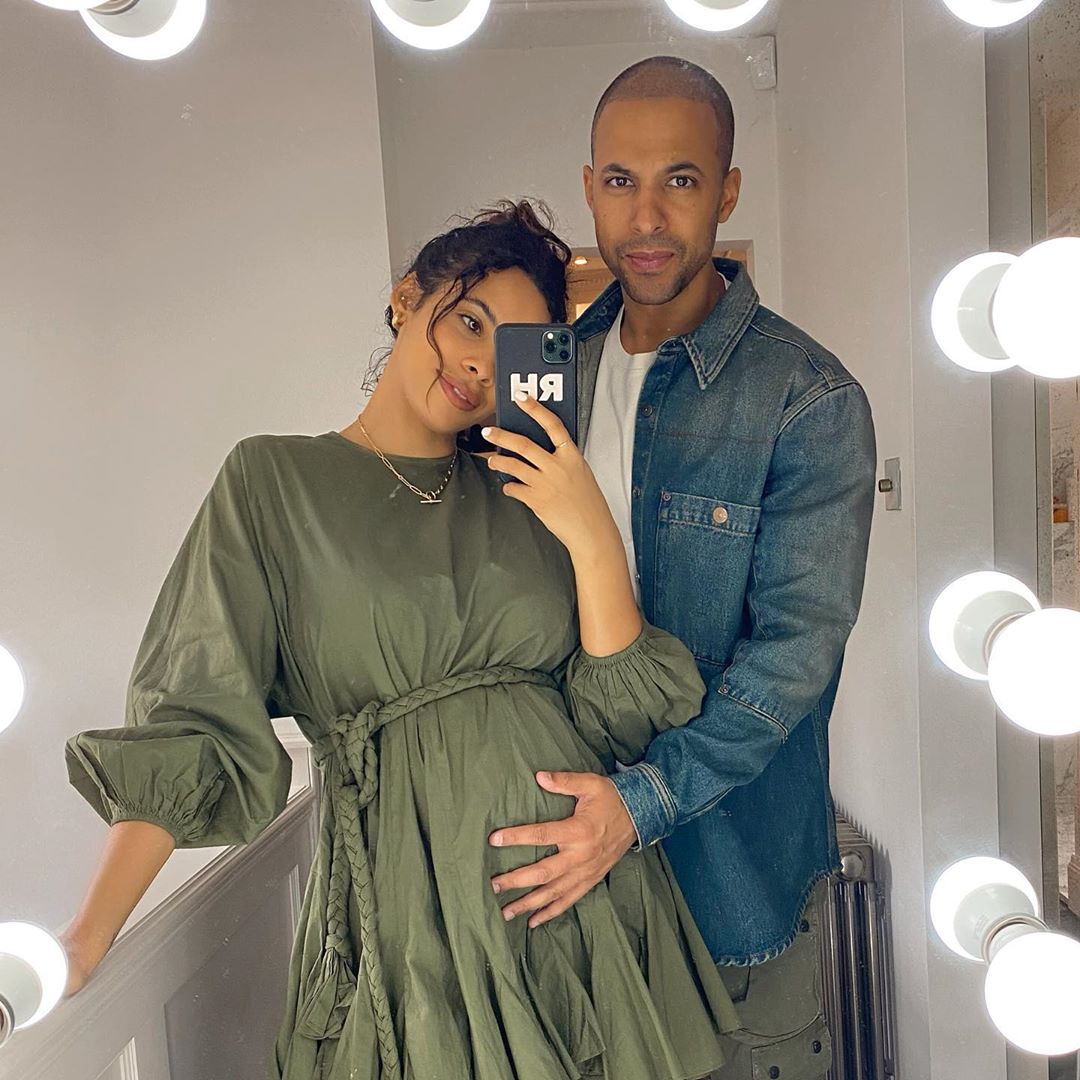 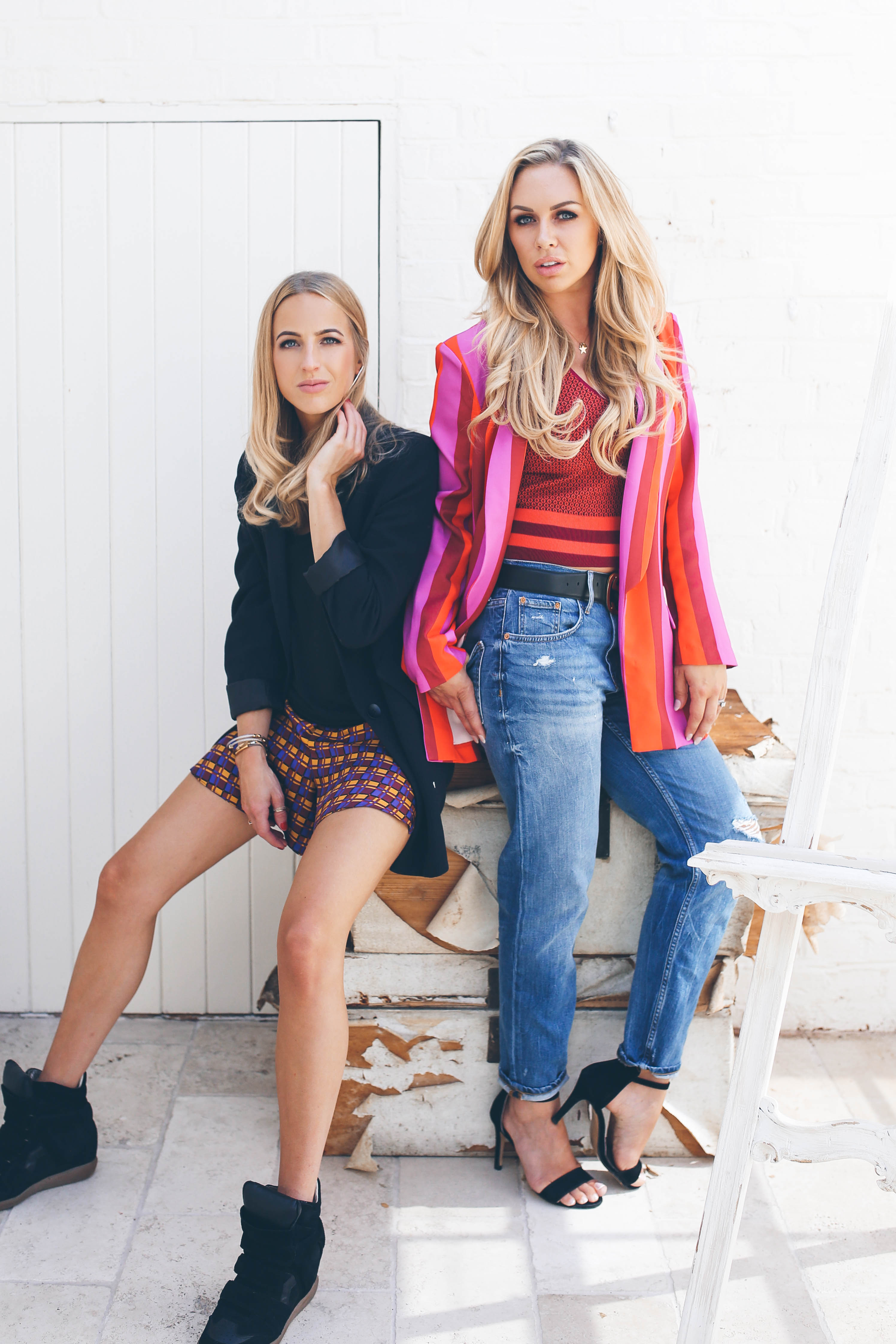 The transformation was done by Essex-based Style Sisters – aka Gemma Lilly and Charlotte Reddington – who charge from £250 to more than £1,000 for wardrobe and room ‘detoxes’.

Showing off their hard work on Instagram, the Style Sisters wrote: “When planning the playroom we knew we wanted a huge cupboard that housed all of the toys so that the room always felt calm and in sync. 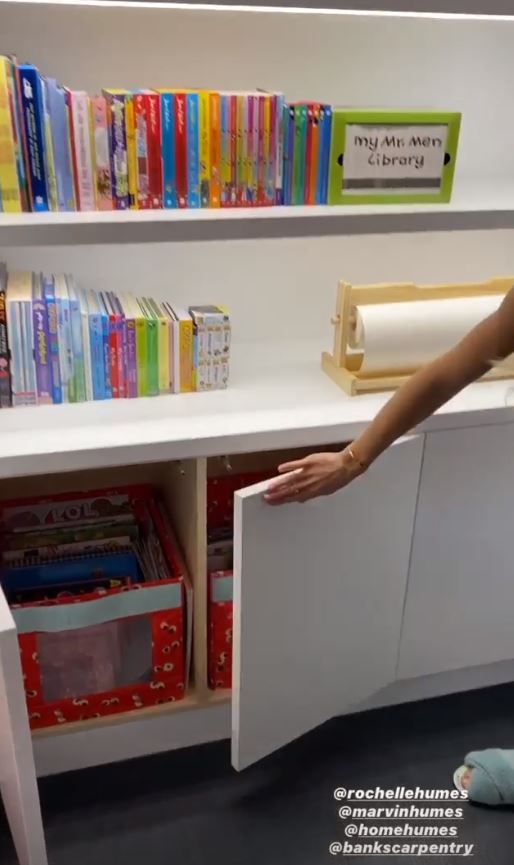 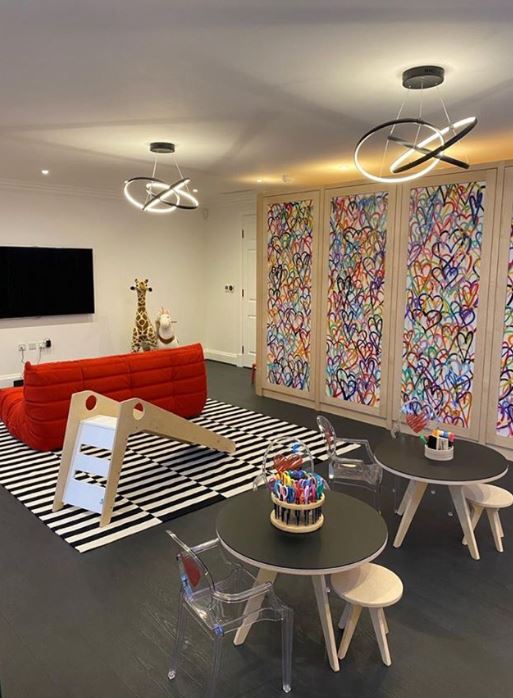 “All us mums know how toys can end up taking over the space!

“It needed to be stylish yet functional, a space the girls can enjoy and be creative in.”

They added the rainbow-heart cupboards were inspired by an art piece they found by James Goldcrown. 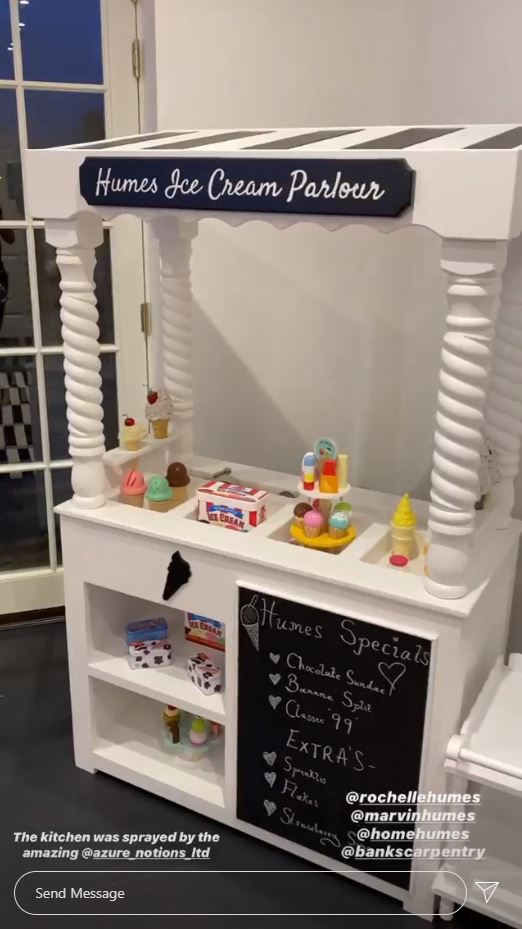 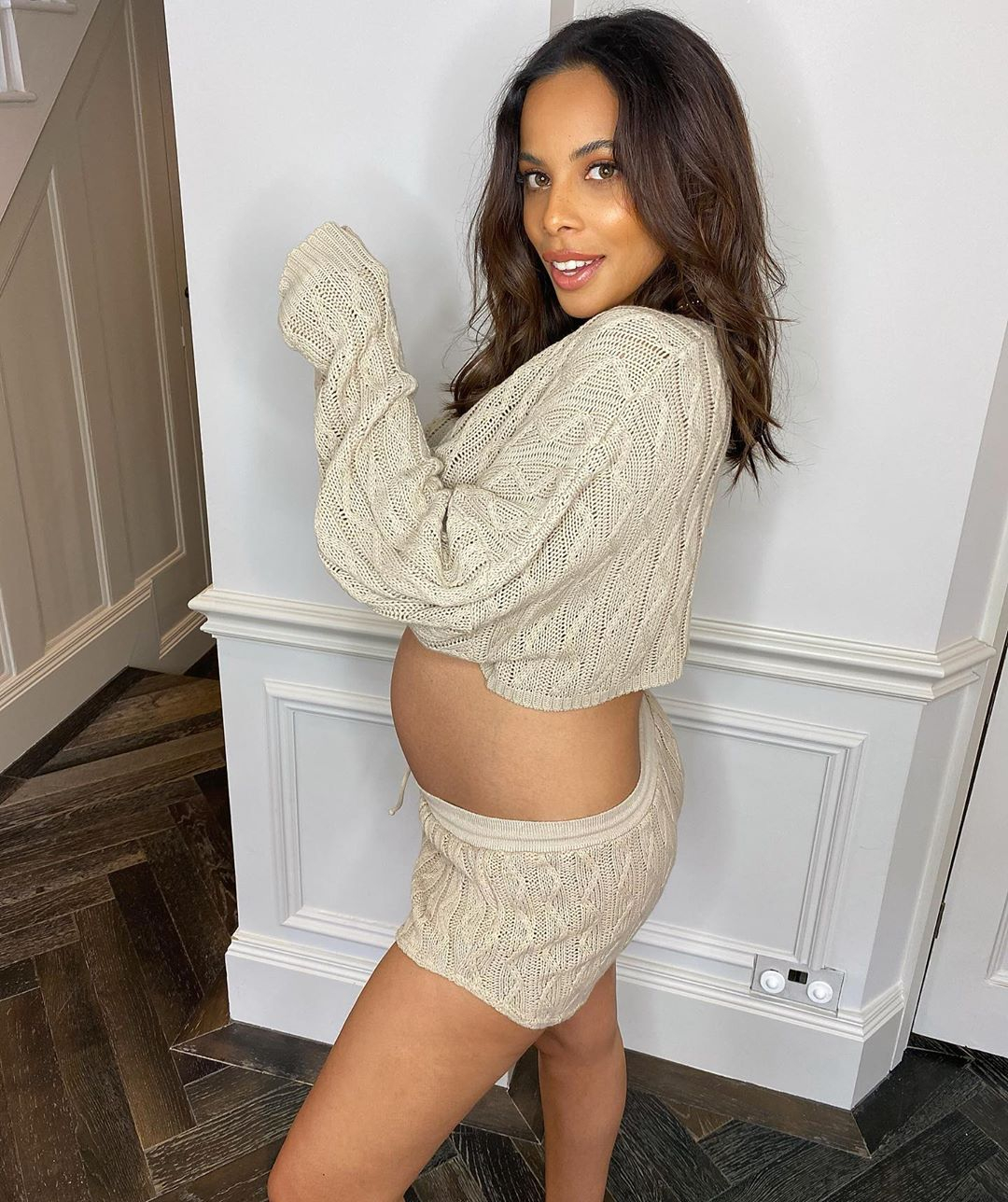 Rochelle and Marvin previously bought a Essex-based Grade II listed home in summer 2015, and spent over a year doing it up before finally moving in January 2017.

However, Rochelle revealed they had moved house last month, and that she was feeling drained.

Rochelle wrote: "Moved house and started back at work in the same week….feeling a little bit drained.

"Still knee deep in boxes and the nesting is real right now..need to keep reminding myself that Rome wasn’t built in a day…I really wish I wasn’t one of those people that wants everything done yesterday, unfortunately for Marv I am.”

Rochelle and Ore Oduba will host This Morning every Friday over the summer, while Eamonn Holmes and Ruth Langsford, will front the ITV hit from Monday to Thursday. 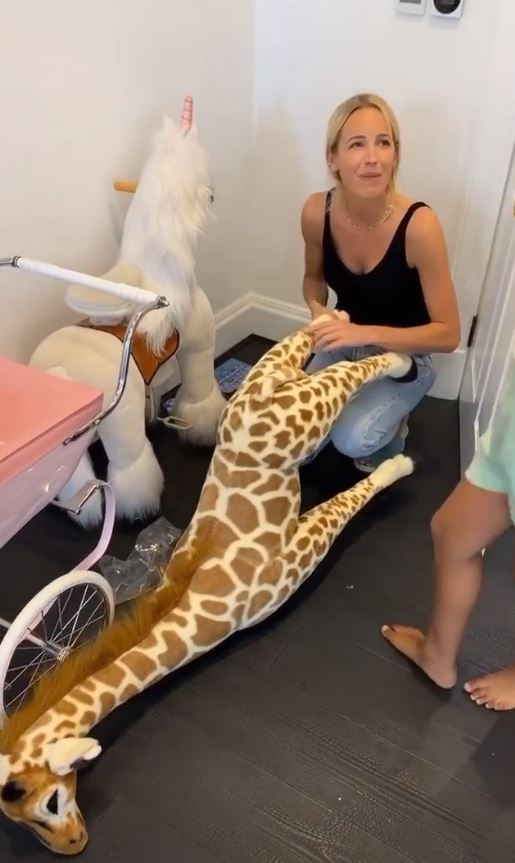 She also admitted to feeling terrified at the prospect of raising a boy.

Rochelle said: "I’m so not ready for these willies and things. I’m scared. God I’m terrified.

"Apparently it sprays at you when you change a nappy."

She made the comment during an Instagram Live with Jay Perry, who she was in pop group S Club 8 with as a child.

Rochelle previously shared a first glimpse of her baby bump after revealing she’s expecting a boy.

She also said she tried to scrub her skin off as top pop stars talk about being racially abused from as young as 7.

How Huawei and Oxford Uni scientists could profit from Covid jab