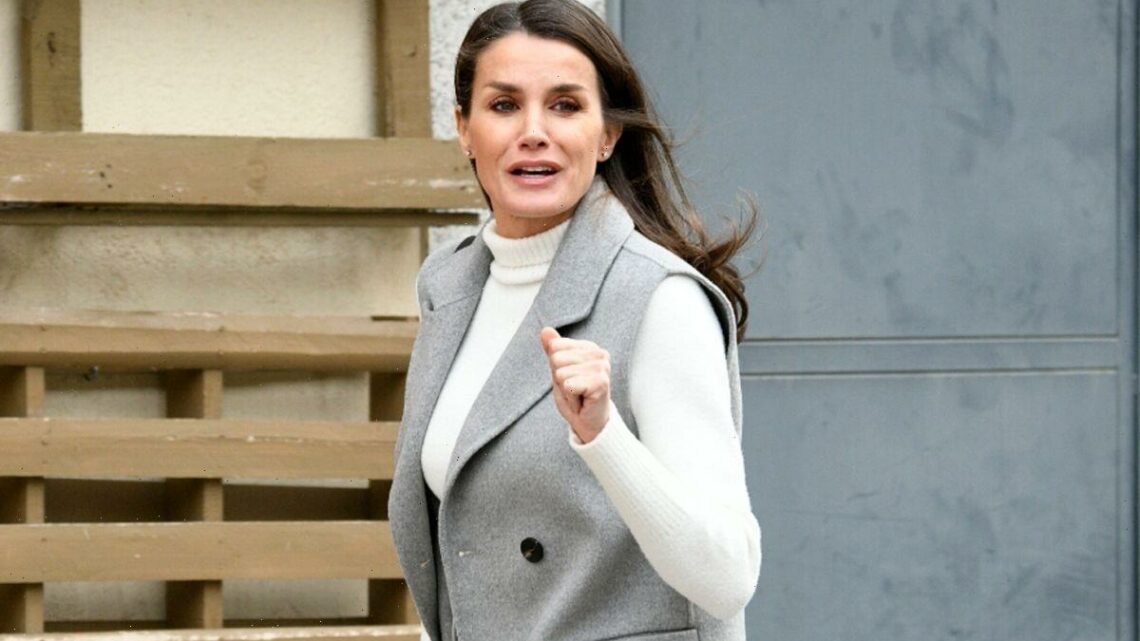 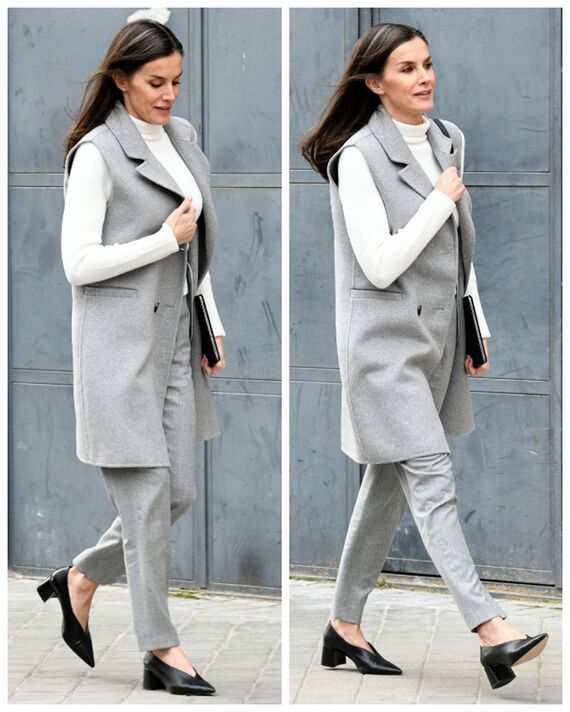 Queen Letizia of Spain, 50, arrived at this year’s first working meeting with the Association Against Cancer (AECC) in Madrid. The Queen, as permanent Honorary President of the AECC and its Scientific Foundation, holds regular working meetings with the organisation to learn about its activities and projects, among other issues.

The Queen of Spain wore a “Robert Overino Grey Vest” according to the Royal Fashion Police Instagram page, which was a new and different look for Letizia.

The vest jacket features two brown buttons on each side.

It was a sleeveless grey garment, but also quite long which reached all the way down passed Queen Letizia’s thighs.

She wore this grey vest jacket over a white turtleneck jumper to achieve a muted style.

This made the overall outfit look very complementary and fitting so that the Queen of Spain looked as best as she could for her important meeting.

For footwear, Letizia opted for her Uterque “Black Leather V-Vamp Block Heel Pumps”, which she previously wore back in 2020.

Unfortunately, they are no longer in stock, so it is unclear how much they cost at the time of purchase.

The Queen of Spain looked great, but she must have been cold when she arrived at the association’s headquarters.

With temperatures as low as they are currently in Madrid, roughly five degrees Celsius, the Queen Consort discarded her coat and chose trousers that left her ankles exposed.

However, Letizia’s “working” style was overall quite successful. She arrived at the Spanish Association Against Cancer with a grey outfit that was most appropriate for the occasion.

The pleated trousers, designed by Hugo Boss, have been seen on several occasions, which she combined with a white turtleneck jumper, also from the same brand.

The best part of the Queen’s style today was the spectacular grey long vest jacket with button detail, designed by Roberto Verino but from a past collection.

As it is from a past collection, it is unclear how much the garment cost at the time of purchase.

Once again, the Queen opted to wear her comfortable shoes from Uterqüe with a low, balloon-shaped heel, that she first wore in 2020.

Her bag was also recycled from her closet, a design by Adolfo Domínguez that she debuted last year in Germany.

NCIS: LA: Why is the show ending? The reason behind series cancelation

Floyd Mayweather vs Aaron Chalmers tale of the tape: How boxing legend and Geordie Star icon compare ahead of fight | The Sun
World News