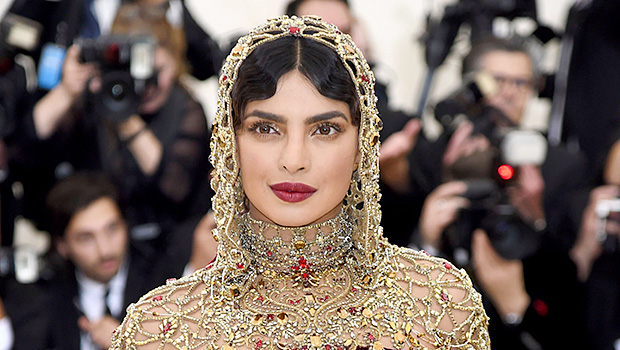 A blushing bride, indeed! Priyanka Chopra looked so pretty in a stunning red dress while marrying Nick Jonas in a lavish ceremony in India on Dec. 2. Check out the pics here!

Priyanka Chopra, 36, is one of the most beautiful women in the world, (literally, she won Miss World in 2000, at the age of 18) and she looked so, so stunning on her wedding day. She was beaming as she married Nick Jonas in a gorgeous traditional Indian outfit by Sabyasachi Mukherji. The red lehenga, which is actually a two piece matching outfit, was covered in sequins and looked perfect on the gorgeous bride. It’s very traditional for Indian brides to wear red on their big day. However, Priyanka and Nick also had a Christian wedding ceremony on Dec. 1, to which she wore white.

“I always knew I wanted a red traditional silhouette for my wedding, but Sabya brought in incredible French embroidery to the mix and with incredible jewelry and western inspired veil, it was just an amalgamation of who I am,” Priyanka dished to Hello! magazine, who shared the first photos of the dress. Along with the red gown, Priyanka wore stunning jewelery, including a necklace that included 184.5 carats of diamonds that were set in 18k white gold. Nick also wore traditional Indian garb for the ceremony.

In May of 2017, Priyanka and Nick attended the Met Gala in New York together “as friends,” as they were both representing Ralph Lauren at the event. By the next May, they were dating, and things got serious from there! The couple got engaged in July 2018, having a traditional Punjabi Roka ceremony. In late October, Priyanka had her bridal shower at Tiffany’s Blue Box Cafe in New York City. She wore a gorgeous white Marchesa gown and Tiffany jewelry. She then jetted to Amsterdam, where she had her Bachelorette party alongside her friends and Sophie Turner, who is engaged to Nick’s brother Joe Jonas.

“You have to be honest with your other half. That’s where the beauty of a real relationship is, being able to be your authentic self,” Nick recently told USA Today. “I have that in my life now.” We wish this adorable couple the best!